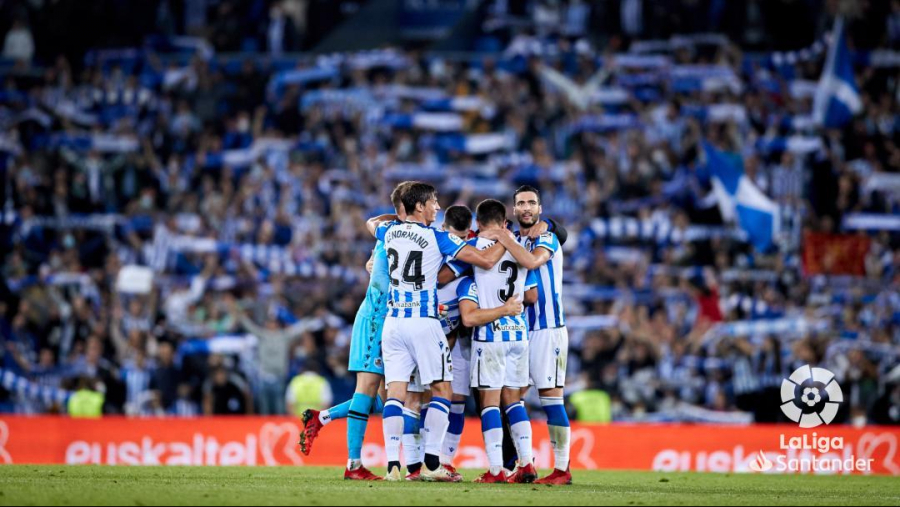 To mark the third-way point of the season, Beyond Stats, the big data project that LaLiga runs in conjunction with Microsoft, offered visitors to its portal a special instalment of its weekly series of football analysis based on Mediacoach statistics. The special feature underlined the highly competitive nature of LaLiga Santander and focused on the metrics recorded by Real Sociedad, who have been one of the standout sides so far this campaign.

Following the 14th round of LaLiga Santander games, there were just two points separating the division’s top three sides, meaning that for yet another matchday, the Spanish topflight remains the most fiercely contested of all of the major European leagues. The gap separating the top three in the Premier League is four points, whilst it’s six in the Bundesliga, five in Serie A and 12 in France’s Ligue 1.

How Mediacoach is reducing the gap between teams

“At LaLiga we have been working for many years now on ensuring that all the teams, regardless of their resources and financial means, have access to the very best match analysis tools through a single technology platform. This democratisation serves to boost all the clubs’ performance levels, which in turn enhances the standard of the competition. This is the story behind Mediacoach and how it has developed. The quality of the tool has now improved thanks to the endless possibilities offered by Microsoft technology. The effective use of data and an in-depth knowledge of the demands of the game allow clubs to improve their decision-making, which hands them competitive advantages, increases the level of demands and reduces the gap between the teams,” declared Ricardo Resta, director of LaLiga’s Mediacoach department.

Miguel Angel Leal, CEO of LaLiga Tech, attended the Marca Sports Weekend in Seville to offer an in-depth explanation of Mediacoach and how it operates: “When you watch a football match on TV, you see the normal images, but there are up to 16 high-precision cameras that constantly collect data and track the action. The cameras generate data 25 times a second in relation to the positioning of the 22 players, the referees and the ball. This data is obtained in real time.”

“What’s more, the tactical camera offers a constant overview of all of the players and the ball. It monitors players’ runs, long balls and generates just over 3.5 million pieces of data during each game. All of this data is processed and turned into information. What sort of information does it offer? Useful information is generated for the coaches about the players’ performance levels and it is then compared to their historic data. With regard to strategic elements, there are over 200 different kinds of statistics that allow the clubs to analyse things like what the team’s attacks down one flank or their set pieces look like. All of this information helps when making decisions and allows clubs to be more efficient,” commented Leal.

Real Sociedad sporting director Roberto Olabe stressed at the event held in Seville that the San Sebastian club "has a culture of investment and a link to technology."

"When it comes to Mediacoach, LaLiga decided many years to centralise some services to help clubs in the same way. From this moment on, the analysis process began to improve, so too did data visualisation, getting us to where we are today. LaLiga has led the way but has also given way to professionals from clubs on matters because there are many very qualified people working at clubs. The joint process has led to the development of an ad hoc tool with which the clubs are very happy,” he said.

Olabe also commented on the importance of data in football. “We still have a long way to go,” he said. “We have 11 units in development in our growth department, evolution and data being the leading one. I’m not an analyst or a computer engineer but I have a strategic vision of what the club needs and Mediacoach gives us the possibility to get hold of very detailed information, analysis and player observations to inform our decision making.”

These tools have enabled the LaLiga experts to share graphics-based videos and data as they uncover some of the keys to Real Sociedad’s impressive form during the opening third of the campaign and the team’s progress since last term:

Part of the competition’s success owes to the role played by data, with the clubs having benefitted from Mediacoach analysis for nearly a decade. What sets the Spanish competition apart from most of the other European leagues is that the LaLiga clubs are able to obtain data relating to all of the teams in the division, which ensures that all of the sides have access to the same basic information.

The data is used to assist teams with their match preparation, during games to make real-time decisions and for the purpose of post-match analysis. However, the data is also employed in other ways. For example, analysis of the data plays a key role in injury prevention and having access to information on every player in LaLiga Santander and LaLiga SmartBank also proves useful when making decisions regarding domestic transfers.