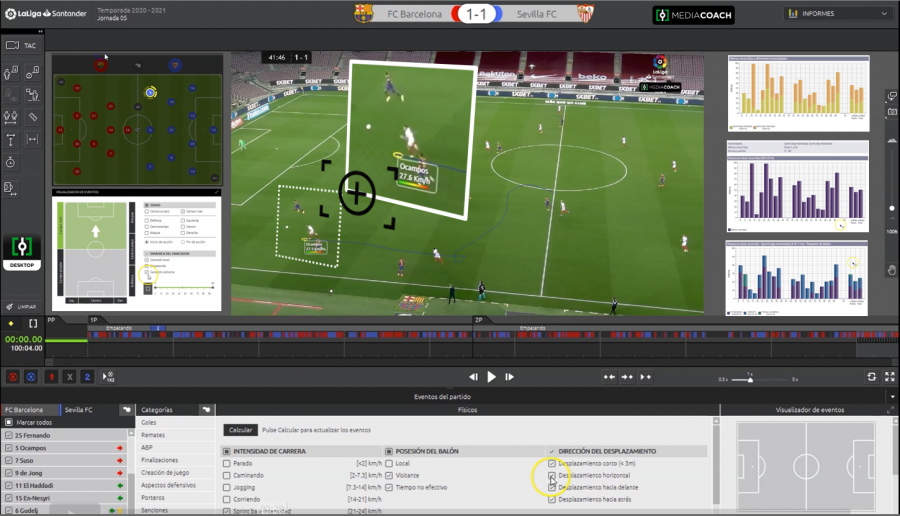 In the week building up to a key fixture, the coaching staff of LaLiga clubs lay out their final plans for how they will achieve victory. But before reaching the training ground, these plans are initially constructed using data.

Through Mediacoach, LaLiga’s real-time match data analytics and visualisation platform, clubs can begin match preparations by downloading the 24-page pre-match report, a document that offers the most comprehensive match statistics about their rival from the last four games.

Through a data revision session, analysts and coaches come together carefully analyse the performance metrics that will help them build a winning strategy. These include characteristics of the opponent’s style of play, the effectiveness and efficiency when attacking and defending, individual statistics of the players, fitness levels and much more.

In total, Mediacoach offers hundreds of data points that can be used to determine the strengths and weaknesses that the opponent presents. All captured via perimeter cameras that are installed in every stadium, LaLiga clubs gain unprecedented insight into each contest and where it was won and lost. The team that analyses this data best can already claim an advantage.

In the near future Mediacoach will become available beyond LaLiga through LaLiga Tech, the soon-to-be-launched commercial venture of LaLiga to sell the technology that has fueled growth and success for Spanish football over the past years.

Once the match plan has been decided, the first training session will begin to put theory into practice. While the coaches direct the tasks on the pitch, the rest of the staff continues to analyse the rival against the clock, delving into any minute detail that may turn the tide in their favour.

Using the Mediacoach Desktop and Mediacoach Vision tools, clubs can carry out an exhaustive video analysis from the past matches of their rival. Looking at all technical and tactical aspects, they can simulate different plays and anticipate what is going to happen in the game.

The video analysis tools offered by Mediacoach allow any game situation to be simulated. Analysts look at the opponent's set-piece approach, how they build attacks, which positions key players occupy and who contributes the most to the team’s collective performance.

At the same time, teams can begin rehearsing different moves as if it were a game of chess. Using Mediacoach data, clubs will look at scenarios based on whether a specific player is on the pitch, or whether a certain tactical system is used, or whether the opponent starts the game at a high tempo.

At the same time, other interested parties are preparing for the same match and can benefit from the insights offered by Mediacoach. For this reason, a 14-page media report is sent to journalists, sports influencers and commentators from LaLiga broadcast partners, focusing on the most noteworthy aspects of the game and delivering it in a media-friendly format. These include head-to-head statistics exploring where teams may have an edge, the key players to follow and why.

Studying the data allows media to find curious details such as the forward who needs the fewest shots to score or the defender who blocks the most shots. Other examples may include the player who recovers possession the most, the wingers with the fastest recorded sprints, or the player with the greatest crossing accuracy. Armed with this information, journalists structure their previews of the match and deliver intriguing facts during the match broadcast.

When the match gets underway, the teams continue to use Mediacoach in two key areas: delivering performance data in real-time to the bench and providing the LaLiga audiovisual team with statistics and positional data that can be converted into advanced 3D graphics and added to the match broadcast, improving the experience for the watching fans.

To stay up to date, the technical staff of both clubs use Mediacoach Live and Mediacoach Mobile. The two applications for tablet and smartphone allow them to monitor all individual and collective performance metrics, with data captured up to 25 times per second.

The data is put at the service of the coach as if it were a Formula 1 control centre, using data dashboards created by the clubs. The coach will then review their chosen parameters, which may include player speed, heat maps of the opponents in possession and out of possession, the number of passes under pressure, success in aerial duels and much more.

This information also allows physical trainers to monitor for injuries and recommend substitutions. When a player or a team reaches a predefined value, an alert is triggered: for example, in the 72nd minute of the match Mediacoach Live may alert the physio that a specific player has exceeded his average distance covered at high intensity. This is immediately shared with the coach who may wish to make a substitution at this point.

As well as delivering this real-time data, Mediacoach offers an additional video signal from the Tactical Camera, a wide shot that allows coaches to follow the live match, re-watch a specific moment, analyse tactical positioning in each phase of the game and assess available spaces that could be exploited.

All of this is done while maintaining permanent contact with staff who are watching the game from the stands, using this vantage point to communicate further updates to the coach.

Even after the match, Mediacoach continues to generate new information. Within just a few minutes of the final whistle, the technicians of both teams will receive post-match reports, consisting of 56 pages with graphs, rankings and statistics that summarise what has happened during the 90 minutes.

Adding to this quantitative analysis, Mediacoach Desktop and Mediacoach Vision will then automatically divide the game into thousands of video clips in which each of the technical-tactical actions can be viewed: from turnovers that led to goals to defensive positions that shut down at attack, to attacks that led to shot. All of this will be used to review the game plan and determine areas to improve.

In turn, all this data will be used to create the pre-match report for the next match, where the whole process begins again. This is the system that is used by all LaLiga clubs throughout the season: a virtuous cycle of new data that helps individual match preparation and at the same time, bringing added value to Spanish football.