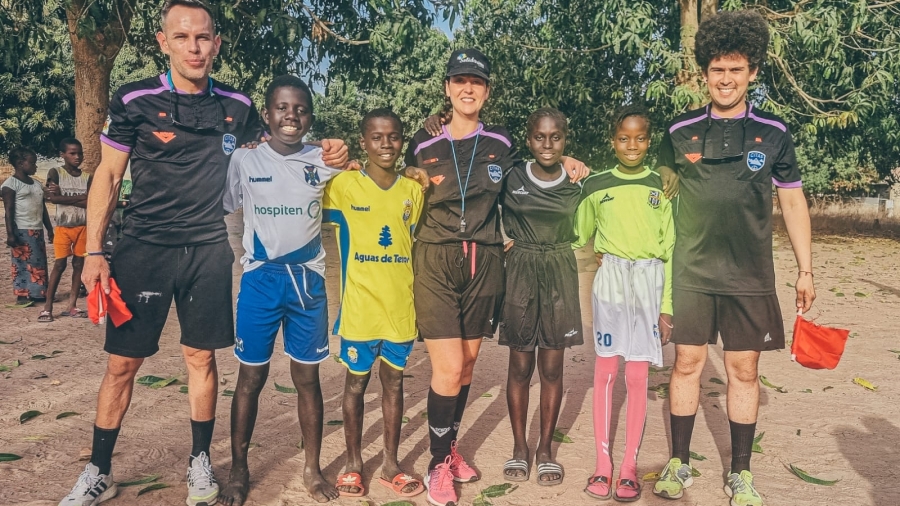 When the Canary Islands Derby is played, one of the most attractive matches in LaLiga SmartBank, both on the pitch and in the stands, the commitment of both sides is at its maximum to win this very special duel. Now, the historic rivalry between CD Tenerife and UD Las Palmas has given way to solidarity to collaborate and do their bit for a social project in Gambia. This is not the first time this has happened, as the foundations of both clubs are used to working together to develop solidarity initiatives.

The two island teams joined forces and worked together with Solidarios Canarios, an NGO that carries out charity work in Jalo Koto, in the Gambia, where the organisation built a school and works to educate more than 250 disadvantaged children. Both UD Las Palmas and CD Tenerife have worked with Solidarios Canarios before and they recently donated football kits to the NGO. This meant the boys and girls in Jalo Koto were able to play their own Canary Islands Derby, as those in the yellow and blue shirts of UD Las Palmas took on those in the white and blue of CD Tenerife.

For both CD Tenerife and UD Las Palmas, it is important to maintain connections with charities in Africa and to provide support where possible. As CD Tenerife explained: “At CD Tenerife and the CDT Canaria Foundation, we want to highlight the solidarity of the Canarian people and the work and support that is taking place in Africa to promote development. Through our channels, we want to highlight the aid being provided by Canarian NGOs, such as Solidarios Canarios, in Africa and, more specifically, in the Gambia. By making these kinds of donations, we can contribute our grain of sand to help cover some of the many needs they have.”

As Paquito Ortiz, head of innovation at the UD Las Palmas Foundation, added: “We want to promote positive values, the values that sport can spread and that align with those of the UD Las Palmas Foundation. In this case, we’ve done this by using football and the sporting rivalry of our two clubs to promote solidarity, sportsmanship and fun. Because of the good relationship and collaboration we have with CD Tenerife’s foundation, we have some projects in common and we were approached about the idea of donating kits through Solidarios Canarios to organise 'a derby' in the Gambia.”

The chance to play football while wearing the kits of two famous and successful Spanish clubs, both of whom are enjoying excellent campaigns in the 2021/22 LaLiga SmartBank season, brought smiles to the faces of all the youngsters who took part in this very special Canary Islands Derby on the playgrounds of Jalo Koto.

Reflecting on the success of this initiative, UD Las Palmas’ Ortiz continued: “It’s important to reach places where, through the donation of some pieces of kit, children can have the opportunity to wear the colours of two LaLiga teams and enjoy football with their community and with joy.”

That feeling was echoed by CD Tenerife, who added: “We were really satisfied when we saw the happiness of all the boys and girls when they put on our shirts. Many of them, we have no doubt, are now fans and supporters of CD Tenerife. It’s worth doing these things. The most important outcome is promoting the good work being done by many people and entities such as Solidarios Canarios.”

Both CD Tenerife and UD Las Palmas will continue to collaborate with Solidarios Canarios and other similar NGOs, using the immense power of football to become a loudspeaker and give back to society.