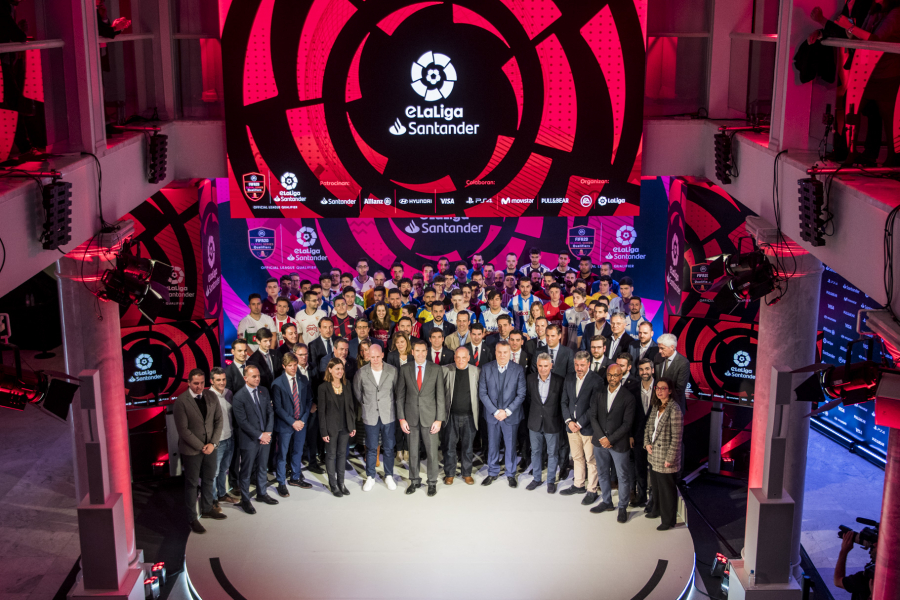 Spanish clubs are growing through eSports and eLaLiga Santander

There is growing anticipation in the world of eSports as eLaLiga Santander has returned for a third season. Spain’s official EA SPORTS FIFA 20 Global Series competition is made up of participants representing LaLiga Santander and LaLiga SmartBank clubs, with more institutions taking part than ever before. After 10 clubs took part in the inaugural tournament in 2017/18, 27 participated in the second edition in 2018/19 and now 33 are battling it out in 2019/20.

The tournament got underway in Madrid with an event held at the Palacio Neptuno on February 14. This followed on from a busy month of January in which 21 of the participating clubs selected their players through drafts, online tournaments where any aspiring gamer could compete for a spot representing their team in this year’s eLaLiga Santander.

Girona FC: More than 350 gamers battled for a spot on the team
One example of how the draft process worked was at Girona FC, where more than 350 players competed over three nights to become the second representative of the Catalan club.

Initiatives such as this one are helping promote Girona FC to a new audience. As Quim Celma, graphic designer at Girona FC, explained: “We’ve started our eSports journey alongside LaLiga and you can see the growth in interest. Our involvement in eSports is helping us to connect with people who maybe know about us more because we feature in videogames than because of our actual matches. Many gamers know our footballers, our badge, our stadium and our sponsors because they’ve played the videogame. They might never have seen an actual match.”

On matchdays, these two worlds are also able to mix. As Celma added: “We’ve brought in two professional players who represent our club in various national and international tournaments, starting with eLaLiga Santander. We’re also creating content with these players. Our fans can play against them in the Fan Zone that we have before our home matches at the Estadi Montilivi. We’re also offering other competitions and experiences associated with eSports.”

LaLiga’s support for a sector that’s on the rise
LaLiga wants to keep leading the way in the growth of eSports, a sector that has seen a surge in interest over recent years. Many clubs want to get involved, given the interest of millennials and sponsors and the growing professionalisation of eSports.

At RCD Espanyol de Barcelona, interest in eSports has led to the creation of a new dedicated team, RCDeSports. As the club’s eSports manager David Gallego explained: “The vision of RCDeSports is to maintain the club’s connection with young people by reflecting the values of traditional sport through eSports. That way, we can create a modern, innovative and attractive area for the new generations.”

Although eSports is relatively new, clubs like RCD Espanyol are already noticing its impact. “It’s already generating results in terms of growing the brand with millennials,” Gallego noted. “The fans’ openness to this section has surpassed our expectations.”

There are currently more than 10,000 social media followers of RCDeSports and that has been achieved in less than a year. There’s also major participation in all the online and in-person activities that have been organised. There was the RCDE FIFA Cup, which was held last September and with more than 150 participants. The eSports section was also involved in the build-up to the recent home match against Athletic Club as fans were able to take on RCDeSports player Cone! in a ‘Beat the Pro’ challenge that saw them try to score before the star eSports talent.

The role of eSports in international expansion
It’s not just within Spain that eSports is helping clubs like RCD Espanyol. “eSports are something we’re backing for the future and for our expansion, both in Spain and abroad,” said Gallego. “The eSports teams are key for the club’s international expansion, not just because they help to take the RCD Espanyol name abroad but also because eSport competitions are widely watched in some regions where football might not be the number one sport, like North America and Asia.”

An exciting season ahead
After the opening tournament in Madrid, there will be two online qualifying tournaments in this season’s eLaLiga Santander and this will take the campaign to the halfway stage. After that, an event will be held in Barcelona on April 1 for the 16 best players up to that point.

A final online tournament will determine who qualifies for the play-offs to reach the grand final, which will be held in Madrid on May 9th. There, a knockout format will be employed as players compete for 100,000 euros in prize money, with the FIFA 20 national champion to receive 40,000 euros.