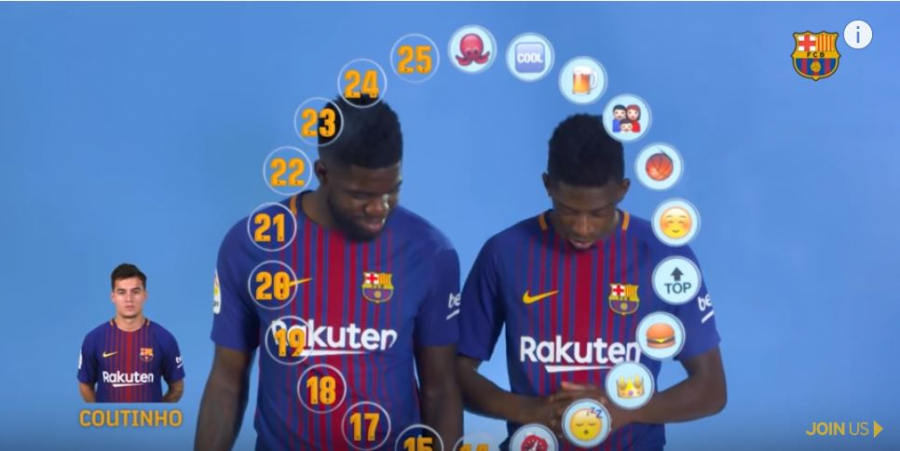 With close to two billion monthly active YouTube users, any business can see the appeal of the video sharing platform. But creating a large and loyal following is a challenge that still evades many of them.

For football clubs, the soaring popularity of online video has demanded a refreshed approach towards communications. Particularly, one that revolves around entertainment content.

FC Barcelona, Sevilla FC, RCD Espanyol de Barcelona and Athletic Club have placed a much greater emphasis on entertaining fans through YouTube. Directors from each of these clubs explained why YouTube is so important and the resulting impact this is having on international followings.

FC Barcelona: “More than a communication channel, we see YouTube as an entertainment platform”
As one of the biggest clubs in the world, FC Barcelona has a global reputation and YouTube has become a prime resource to express its identity. The approach has been so successful that the club now ranks among the very top football teams on the platform in terms of followers and the number of views, with 271 million views in 2018 alone.

Rather than consider YouTube as a club mouthpiece, FC Barcelona understands that viewers turn to the platform for leisure. “More than a communication channel, we see YouTube as an entertainment platform related to the day-to-day of the club,” explained Digital Content Manager David Saura. “It’s a key part of our entertainment content strategy for medium-long-term content.”

Reflecting its global nature, a remarkable 91.5% of the club’s YouTube channel subscribers come from outside of Spain. For this reason, English and has become a priority language for the club, which publishes content directly in English or with subtitles. Exclusive preview programmes are also produced, with English commentary provided for its league games.

To add yet more diversity to its offering, the club also partners with a wide network of content creators for its channel. “Since the beginning of the 2018/19 season we have been working with a team of 'in-house' influencers and content creators,” Saura noted. “This allows us to make direct or ad-hoc content for the platform in a much more agile way.”

Sevilla FC: “The game to achieve greater internationalisation of our brand is also played on YouTube”
The recent growth of Sevilla FC’s YouTube channel reflects the added importance the Andalusian club has given to the platform. In 2016 there were 3,940 new subscribers, while in the first few months of 2019 they already have passed 9,370. It’s similar when looking at content views, which have increased from 3.1 million to 10 million in the past 18 months.

This powerful profile is the result of Sevilla FC’s sustained efforts to create new and exciting video content with YouTube a clear priority. Today, 90% of all club communications are linked to the YouTube channel, if not solely communicated in video format.

“In our communication strategy YouTube is of paramount importance and we are convinced it will continue to grow because we increasingly allocate more resources to it.” Director of Communications Jesús Gómez said. “We have a lot of room for growth and without a doubt we are going to go for it, because we are clear that the game to achieve greater internationalisation of our brand is also played on YouTube.”

In order to most effectively interact with that global audience, Sevilla produce content in English, Arabic, Chinese, French, Japanese and Russian, as well as Spanish. This foreign language offering is set to expand still further in the coming years.

“Next season we expect to see a quantitative leap in the number of international subscribers,” added Gómez. “The reason? The videos that are subtitled and recorded in different languages will be multiplied. YouTube is a key tool to project our club identity both nationally and internationally.”

One specific focus on the Sevillistas’ channel is on the work done by their charitable foundation, showcasing the social efforts the institution is involved in, and they’re also considering a new focus on their eSports team on the platform.

The Catalan club’s Digital Manager Laureà Folch explains: “Our President is Chinese, and the arrival of Wu Lei has generated a lot interest among the Chinese followers who are spread all over the world. We have a playlist with Chinese content that we update every week.”

The strategy requires particularly specific targeting given the availability of YouTube within China itself. “We are aware of the difficulties of accessing YouTube from China and for this reason we focus on generating content for the entire community of Chinese users residing outside of China,” Folch added.

This season, the club has also increased its focus on live events through its YouTube channel. From press conferences after daily training, to B team games at the Dani Jarque sports city, fans can now use the channel to get up-to-the-minute action from inside the club. This type of content will become an even bigger priority for the club the next season.

Once again, the approach is paying off in terms of followers. “This has been the season with the highest growth and playbacks achieved,” Folch stated, referring to the addition of 6,300 new subscribers and a 16% growth in the audience from outside of Spain during the 2018/19 campaign.

This season was a particularly memorable one for RCD Espanyol de Barcelona as they returned to European football after a 12-year absence and their top piece of video content for the campaign was the mini movie called ‘Hello Europe’ that was made to celebrate their Europa League qualification.

The club is particularly proud of that piece, as well as the promotional video for the Espanyol women’s team’s Liga Iberdrola match against Atlético de Madrid. The rallying cry certainly had an impact, as a historic attendance of 20,615 was achieved at the RCDE Stadium. That is a clear example of YouTube clicks translating into clicks at the turnstiles.

Athletic Club: “We can show fans from around the world what we stand for”
For Athletic Club, the opportunity of YouTube is primarily for storytelling. Spanning its more than 120 years of history, the Bilbao side uses the channel to explain its unique position in world football to over 39,000 global subscribers.

“The history of Athletic Club is one of the richest in the world of football and we understand YouTube is one of the best ways to publicise who we are,” the club declared. “Within this channel there are no borders; we can show fans from around the world what we stand for.”

Across its considerable output, fans will find content from all its football teams, academies, partners and its foundation in equal measure. “Part of our identity is the fact that we are one team, one family,” the club added.

However one of the highlights of the club’s recent history has come from its women’s football team, which earlier this year broke the national attendance record for a women’s match in its San Mamés stadium. Naturally, this event forms a central part of its recent video content.

Athletic Club added: “Our commitment to the women's team started a very long time ago when very few people and clubs were embracing it. Then and now, we work to empower our women’s teams at all levels. YouTube allows us to do this at a deeper level than on other social networks.”

Another unique aspect of the club’s channel is the presence of first team match highlights, dating back as far as the 1980s. Providing a resource for fans to relive past glories was a major undertaking, but as the club explains, has helped to express an essential part of the club’s identity while also entertaining subscribers.

“Caring for our history and our ex-players is a way of celebrating our club and distinguishing ourselves”, the spokesperson said. “But more than anything our audience tells us that this is quality content and they want more of it.”

From match highlights to interviews to games and pranks, the YouTube channels of Spanish football clubs are creating all kinds of new content to entertain users around the clock, both in Spain and overseas.