As soon as the domestic season finished Spanish football clubs began crossing borders, bringing the excitement of LaLiga to new spectators and creating partnerships to help grow the competition internationally.

The two rivals from of Seville, Sevilla FC and Real Betis, demonstrated this initiative with trips to Africa and America respectively, pursuing both on-field success and off-field connections. Organised by LaLiga World Challenge, a LaLiga programme supported by the Spanish government, national sports council and Spanish Institute for Foreign Trade (ICEX), the ultimate aim of such trips is to bring Spanish football closer to fans around the world.

After meeting with local media, leagues, partners and thousands of fans, both clubs found that the appetite for the Spanish game remains as high as ever.

Real Betis: Bringing the Spain experience to Washington, D.C.
Before beginning its summer friendly programme against DC United, Real Betis was focused on how the international sports community can create more productive partnerships, particularly in North America, a continent where interest in football is growing and the 2026 FIFA World Cup will be played.

“As we move towards the 2026 World Cup, growing the LaLiga brand in the U.S. is a big opportunity and we want to strengthen our partnerships here and continue to reach more fans,” said Nicolás García Hemme, VP, Strategy & Business Development, LaLiga North America.

“The Real Betis brand is a great way to showcase the passion of the Spanish fans and connect with new fans and partners in the U.S.”

The excitement of fans is a key aspect of Spanish football that the US is keen to emulate. Tommy Sheppard, Senior VP of Operations, Washington Wizards, added:

“One thing we took away from that experience and from being part of Real Betis’ trip this week is the passion of European fans. That passion is something we continue to work hard to capture in the U.S.”

The event, supported by the Embassy of Spain in Washington, D.C., preceded the first international friendly to be played at DC United’s new purpose-built stadium, Audi Field, but presented much wider opportunities to continue the global growth of the green-and-whites.

“Visiting Washington, D.C. as part of our U.S. tour is an important pillar to expand our brand in this country,” said Ramon Alarcon, Chief Business Officer, Real Betis.

“To grow successfully, you have to come here to learn how your brand is perceived, build new relationships with the community and partners and create new fans. People have a lot of options for entertainment and our responsibility is to bring the experience of LaLiga and Real Betis to fans in the U.S.”

Sevilla FC: Pioneers in Tanzania
Meanwhile in Tanzania, Sevilla FC was making history as the first Spanish club to visit the sub-Saharan country. Before performing in front of approximately 35,000 fans inside the National Stadium, the trip represented a unique opportunity for the Andalusian club to learn.

Organised with the help of SportPesa, LaLiga’s regional partner, Sevilla and LaLiga representatives took part in a seminar in the city of Dar es Salaam to exchange knowledge, experience and expertise relating to the football industry and the positive impact of the sport on society.

During this event, the club’s Sporting Director Ramón Rodríguez Verdejo (commonly known as Monchi) shared his expertise in management at a high-level club while Antonio Barradas, director of LaLiga in South Africa, discussed the different initiatives kick-started across Africa by LaLiga and their positive contribution to social change.

“LaLiga has been present in Africa for many years now thanks to all of our fans, our institutional presence through LaLiga offices in South Africa and Nigeria and our delegates in nine countries across the continent,” Barradas noted.

Sevilla went on to hold a clinic with youth players from local side Bom Bom at the National Stadium where stars practiced different technical drills and skill tests together with the Tanzanian youngsters. There was also time for local cultural experiences before the historic game took place.

Having worked to internationalise the competition since 2014, the momentum generated by LaLiga outside of Spain is clearly opening doors for the clubs. Reflecting on the huge popularity of Spanish sides in countries like Tanzania, Joaquin Caparros, Sevilla FC coach at the time of the visit, commented: “LaLiga has the best players and it’s seen all over the world, because people want to watch the very best.” 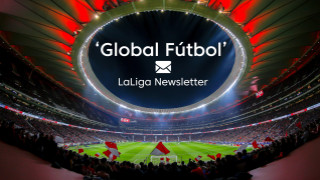