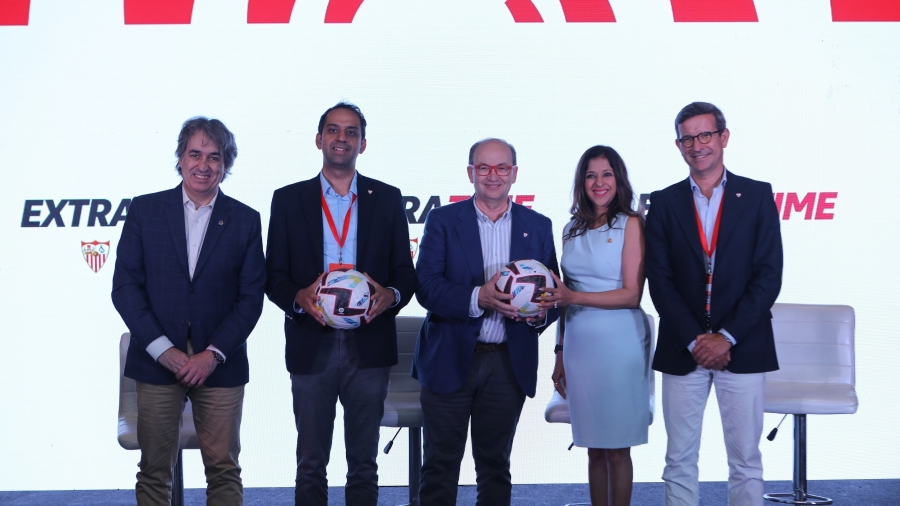 A Sevilla FC delegation led by Club President José Castro, General Director José María Cruz and Business General Director Jorge Paradela recently visited the Indian city of Bengaluru to consolidate its brand presence in the country. With both Sevilla FC’s internationalization strategy and the impressive potential not only of FC Bengaluru United but also the country and its talent for becoming a footballing superpower in Asia in mind, the visiting delegation participated in various activities including meetings with heads of Indian and international companies.

The club, building on its technical, business, and technological expertise, has decided to invest in India in partnerships that go beyond traditional methods. The visit to India and footing established there over time has allowed the club to better understand Indian football and sports culture, while imparting this expertise to business and administrative experts in the country to make a positive impact at grassroots level.

During the visit, Sevilla FC took part in several different activities to increase engagement with top football and business administrators from India, starting with launching the FC Bengaluru United women’s team, a step forward for the club made possible by Sevilla FC’s experience in the area. The LaLiga side also visited Infosys, one of India’s foremost technology companies, as part of its focus on technological innovations, research and development and data usage.

The visit also saw the launch of the 'Football Hackathon: Data-driven Player Performance Assessment,' a joint initiative of the club and its international partner, FC Bengaluru United, which aims to effectively use data science in the field of professional football scouting and player performance analysis.

Jorge Paradela, Business General Director of Sevilla FC, said: “With our focus on technology, R&D and usage of data, Bengaluru was the perfect choice for our visit as it is often called the Indian Silicon Valley. Leveraging our partnership with FC Bengaluru United, we have launched the Football Hackathon in India which aims to encourage the brightest minds to generate ideas that will lead to better understanding of player performance in football.”

“At Sevilla FC, we already have a dedicated team of 21 professionals focused on research and development of technologies who have created advanced applications like AiFootball, AiScouting, AiTracking and AiRadar. Through meetings with top administrators and pioneers in the Indian tech space like Infosys, we carved out how we can further our technological expertise and even bring it here to India,” he added.

The final leg of the visit saw the ‘Sevilla FC Junior Cup’ development tournament take place at HAL Grounds and the club participate in the ‘LaLiga Extra Time’ event. The event, held in collaboration with the Indo Spanish Chamber of Commerce and Embassy of Spain, was also attended by Surbhi Sharma, Honorary Consul of Spain in Bangalore, and Gaurav Manchanda, owner of FC Bengaluru United.

Sevilla FC President Jose Castro said: “Our visit has been very fruitful and we are thankful to all the companies and people we met here who helped us understand the opportunities and avenues open to us in this beautiful country. We were always aware of the potential India has seeing LaLiga’s work here, and this visit bolstered our belief and confidence in our internationalization strategy. The one thing that was clear to us over the course of these five days was the passion Indians have for football and we are more committed than ever before to consolidating and growing the Sevilla FC brand here.”

Jose Antonio Cachaza, Managing Director of LaLiga in India, concluded: “It gives us immense pleasure to see Spanish brands, especially those with as strong a history and expertise as Sevilla FC, recognising the potential of the Indian football ecosystem. One of our key focus areas since establishing presence here has been to showcase the prospects the country offers to all our global and Spanish partners and to bridge the gap. LaLiga clubs like Sevilla FC have an opportunity like never before, now with the LaLiga Impulso (Boost LaLiga) project, to expand their presence globally and we are looking forward to supporting them in their strategy.”