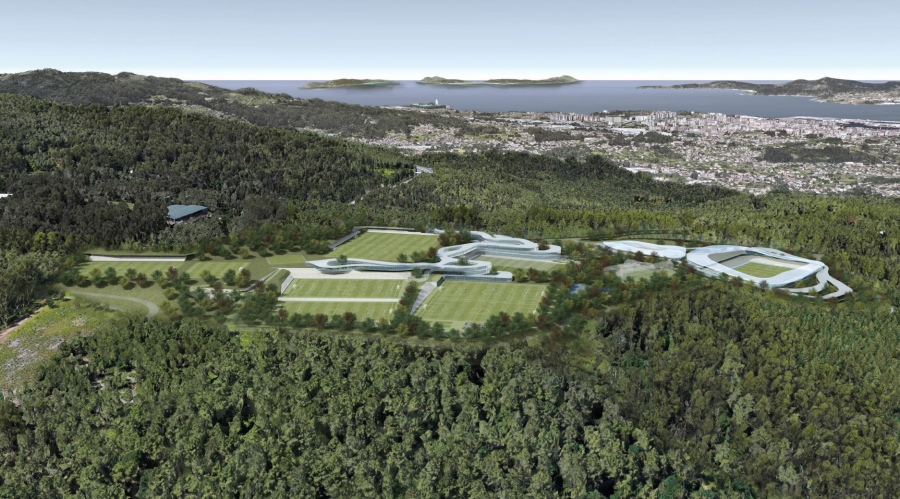 For over 30 years, RC Celta’s A Madroa sports city has produced a string of top-quality Spanish players including Iago Aspas, Denis Suárez, Jonny Otto, Joselu, Yoel and Borja Iglesias. This track record has earned the club worldwide acclaim for the creation of new playing talent, which it plans to build on with the creation of brand-new facilities: the Ciudad Deportiva de Afouteza.

Offering an improved range of resources and all the functionalities of a world-class training centre, the LaLiga Santander club plans to enter its next stage of growth, generating new players while putting itself and the Vigo region on the footballing map.

Pioneering facilities
First and foremost, the new sports city is designed to meet all the demands of modern football. "This high-performance centre more than covers all the needs of professional footballers and the youth team, so that the club can grow and improve on the results of recent years," said Carlos Cao, director of the club’s business department and technical investments.

"As factories have production lines, our sports city is where new players and created in order to nurture our first team,” he added.

The new sports city will occupy 237,000 square meters in the Galician town of Mos, just outside of Vigo. Included are nine football pitches (five of natural grass and four artificial), a multipurpose arena, changing room buildings, residence for academy sides, a gym and spa areas.

"These are pioneering facilities that will house all our youth players and allow us to grow, without a doubt the quality and quantity of production," Cao continued.

Combining sport with sustainability
The change in the club’s surroundings is immediately noticeable, having gone from four pitches at A Madroa to nine at Afouteza. But as well as increased size and comfort, the club plans to increase its sustainability following the move, as it aims to incorporate the natural beauty of Galicia as much as possible.

"It is a unique place where nature will take a leading role and will make the experience of visiting Afouteza unforgettable once the project is completed", explained Cao.

By celebrating its surroundings, RC Celta aims for Afouteza to become a benchmark attraction for Vigo, for Galicia and for the northwest of Spain. "The basis of a great a city is that people can live and interact in harmony and that the buildings and facilities serve a specific purpose,” he said.

“We want the sports city to coexist with other activities designed for the community and hope that it can be a place for people to enjoy sport as well as leisure, culture, commerce and music.”

Adding to its community ties, the club’s fans played a key role in the creation of the new sports city by choosing its name, with more than 3,500 proposals sent to the club. The final decision to choose ‘Ciudad Deportiva de Afouteza’ was made after more than 15,000 fans participated in the vote.

Cornerstone of the club's future
Having officially opened the sports centre at the end of 2020, the club expects to see the results of its move in the years ahead.

“Since the arrival of our president [Carlos Mouriño], our strategy has been closely based on the growth of our academy,” he said. “We’ve been able to achieve a lot since then, despite being in the older facilities of A Madroa.”

With the opening of Afouteza coinciding with the arrival of current manager Eduardo Coudet, club results on the pitch have taken a noticeable upturn, which has provided more reasons for optimism across the club. “It was a highly anticipated project and recent results are already hinting at the long-term pay off,” Cao said. "What is sure is that we have one of the best sports cities in Europe."