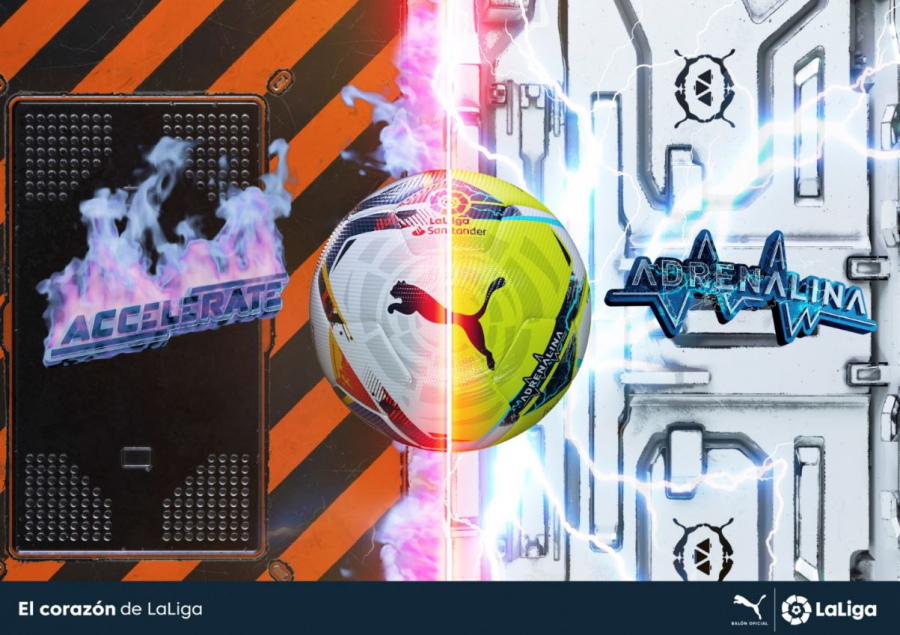 PUMA and LaLiga have unveiled the official match balls to be used for all LaLiga Santander and LaLiga SmartBank matches during the 2020/21 season, featuring the latest technology and designed to represent the heart of the competition.

The ball comes in two iterations; Accelerate, which will be the primary ball for the season in traditional white, and ‘Adrenalina’, the alternative yellow ball which will be used for standout fixtures such as  ElClásico between FC Barcelona and Real Madrid, local derbies across the competition and other decisive matches.

Addition of new technologies
Both new balls have been FIFA quality approved, guaranteeing the highest level of performance, while PUMA has applied its latest technologies to ensure a state-of-the-art design. Using high-frequency moulding, good shape retention is guaranteed as well as durability and reduced water absorption.

Further to this, the balls’ eight-panel configuration reduces the number of seams resulting in larger panels for better connection with the ball. Through a 3D textured 1.2mm polyurethane surface, it also offers improved aerodynamics, and increased resistance to abrasion and wear, resulting in greater durability.

Finally, a newly-developed foam made of Polyolefin elastomer (POE) has been added to the design in order to increase touch sensitivity. This helps to improve ball control, rebound consistency and shot power.

Designed to evoke feeling
In both cases, the balls have been given colour combinations that offer excellent visibility while evoking the passion of fans following their team.

Promoted as ‘the heart of LaLiga’, the balls incorporate design elements to promote excitement, speed and adrenaline.

The ‘Accelerate’ ball, which will be utilised for the majority of LaLiga fixtures, is a traditional white ball featuring the colours of the LaLiga logo integrated into the design. Custom acceleration graphics have then been added to showcase the explosive speed of the ball when moving.

The ‘Adrenalina’ ball has been created for special occasions and will be used for showpiece LaLiga fixtures, including ElClásico between FC Barcelona and Real Madrid, local derbies between fierce rivals and other crunch matches that will occur throughout the 2020/21 season. Its design features electrifying patterns resembling a nervous system, reflecting an increased heartbeat and the production of adrenaline.

Through its new offering, PUMA and LaLiga aim to continue triggering raw emotions from fans during the matches and in all aspects surrounding the game, supporting the league’s tagline ‘It’s not football. It’s LaLiga.’

The official 2020/21 LaLiga Accelerate and Adrenalina footballs are available now on PUMA.com and at select retailers worldwide.