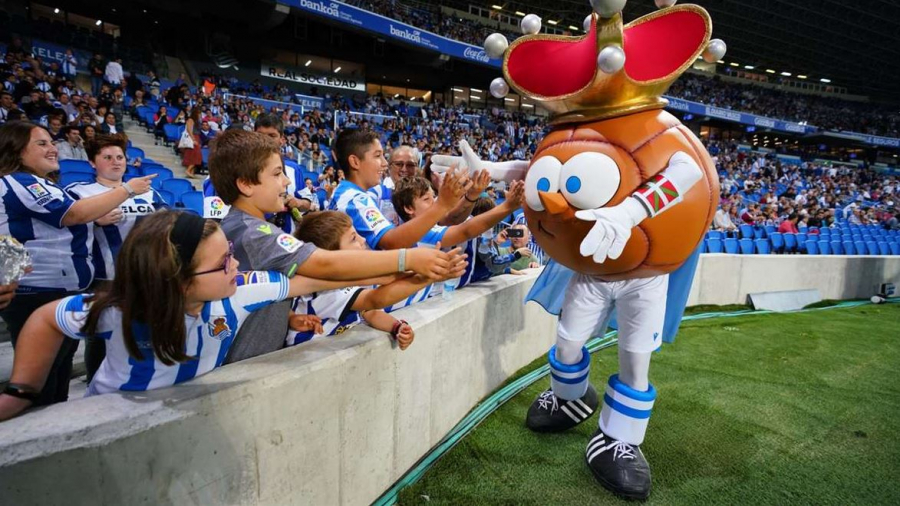 How mascots are helping LaLiga clubs grow their brands

Mascots are often seen as one of the more light-hearted and amusing elements of a football team, but there is a more serious side to these characters.

More and more LaLiga clubs are creating official mascots that bring colour and spectacle to home matches, but also help to create marketing campaigns that aid national and international expansion.

CD Leganés: The rise of SuperPepino

CD Leganés’ mascot SuperPepino hardly needs introduction. Based on the club’s cucumber-related nickname, the character creates widespread social media activity whenever it appears. This has quickly led Los Pepineros to include the mascot in its internationalisation strategy.

For example, SuperPepino was recently visited by fellow pickle Mr. Dillon, the mascot of US college baseball team the Portland Pickles. Ahead of the Spanish club’s LaLiga Santander fixture against Villarreal CF on September 14th, the two mascots spent time outside the stadium and took photos with fans, before being presented to those inside the Estadio Municipal Butarque.

The two mascots also took part in a tour and a shirt exchange ahead of the game, an event that was publicised by both teams and generated significant social media buzz as well as traditional media coverage. SuperPepino has also become a recognised part of the club’s travelling entourage, making a recent appearance at Real Betis’ Benito Villamarín stadium.

“All of the content done with SuperPepino, such as the visit to Real Betis’ stadium or the meeting Mr. Dillon, has had a spectacular impact,” stated Víctor Marín, director of communication and marketing at CD Leganés.

Wherever SuperPepino goes, the club aims to spread positive values that are focussed on fair play and on enjoying football in a healthy and fun way.

As Marín explained: “SuperPepino visits kids at our school and academy and has struck up relationships with other mascots within Spanish football and from abroad. Plus, SuperPepino attends events such as Children’s Day, our fan zone, autograph sessions and much more.”

Both nationally and internationally, SuperPepino is achieving positive results for CD Leganés. Even though the mascot was only launched in the 2018/19 season, the reach achieved has been huge, leading to the creation of SuperPepino merchandise such as mugs, cushions, scarves, key rings, piggy banks and phone covers. The key for Leganés has been to be distinct: “It is not difficult to remember a giant cucumber,” Marín notes.

While SuperPepino is a relatively new mascot, that’s not the case with Villarreal CF’s Groguet. This mascot was designed in the yellow and blue colours of the team and in the image of a submarine, one of the club’s nicknames. “The yellow submarine is a pop culture icon that the whole world recognises,” said Juan Antón de Salas, director of the international department of Villarreal CF. “The mascot brings this concept to life and can help us to become a preferred choice for non-Spanish football fans who are choosing their favourite LaLiga team.”

Born in 2001, the mascot was created to grow the fan base as well as entertain the crowd pre-match and at half-time. In the local community, Groguet is a regular presence at Villarreal CF events from local school visits to charitable activities such as the International Day Against Childhood Cancer, hosted at the club’s sports city.

Our mascot, 'Groguet' , is warming up for our #LaLiga hope opener against @RealBetis_en on Sunday! pic.twitter.com/1ffZk6RpRq

Groguet is also present at the club’s sponsor gatherings, adding an attractive element for brands that are becoming associated with the club. For almost two decades, Groguet has been promoting the Villarreal CF values and more than ever, the character is bringing people closer to the club.

“Groguet conveys club priorities such closeness with children and familiarity while creating a friendly atmosphere in the stadium,” Antón continued. “The mascot is special in the way that it brings people together. It’s like having another player on the team.”

Txurdin, a name based on the Basque words for the blue and white colours of Real Sociedad’s kit, is the newest mascot in LaLiga Santander. This character made its debut this season when Real Sociedad hosted Atlético Madrid on September 14th and is now a presence at all the club’s men’s and women’s matches.

“We try not to link Txurdin exclusively with the matches, although we know that it is the best context to generate engagement,” the club explained. “The scope of activity covers much more, especially social events, focused mainly on children, where the response has been very positive.”

The Atlético Madrid game was the first home match of the season for La Real, which recently redeveloped its Reale Arena stadium. As part of this, it was looking for a mascot to guide the team into an exciting new era, focused on values that the club describes as "belonging, closeness and sportsmanship".

The club’s youngest fans had the say in the creation of the mascot as 156 children at the club’s summer camps voted between a series of options, with Txurdin winning by some distance. Moving forward, the club sees Txurdin as a key part of its brand positioning and believes an immediate impact will be to "increase loyalty and expansion in digital channels.”

“We are detecting that Txurdin is very well liked, especially in social networks," the club added.

The mascot couple of RCD Espanyol de Barcelona, Perico and Perica, participate in different social and educational activities in order to convey the values that the club, which as Agustí Filomeno, marketing and commercial director notes, are "illusion, ambition, innovation, closeness, humility, responsibility and social transformation."

Filomeno added that the presence of the mascots "Helps us to promote closeness to the youngest members of our crowd and fosters the family environment that we have."

Away from the pitch, Filomeno noted that Perico and Perica "Have their own digital logo, which has recently been launched in parallel to the current season ticket campaign." After giving the mascots a more powerful and modernized appearance, they will now be used as a more overt brand asset. “The design allows fans of all ages, to display the mascots through t-shirts, key chains or stickers,” Filomeno continued.

In total 12 teams in LaLiga Santander have an official mascot. Aside from those mentioned, there is Palmerín at Real Betis, Indi at Atlético Madrid, Rat Penat at Valencia CF, Dimonió of RCD Mallorca, Real Valladolid’s Pepe Zorrillo, the Levante UD pair of Blau and Grana, CA Osasuna with Rojillo and Rojilla and Deportivo Alavés with Zorro Babazorro.

While most clubs have only explored the creation of mascots in recent years, those that have taken the step into this world are seeing positive results through the spreading of club values, the promotion of fair play and the building of a more distinct brand. Far from just a fun distraction on matchday, mascots are allowing LaLiga clubs connect with a wider global audience and propel themselves into the future.