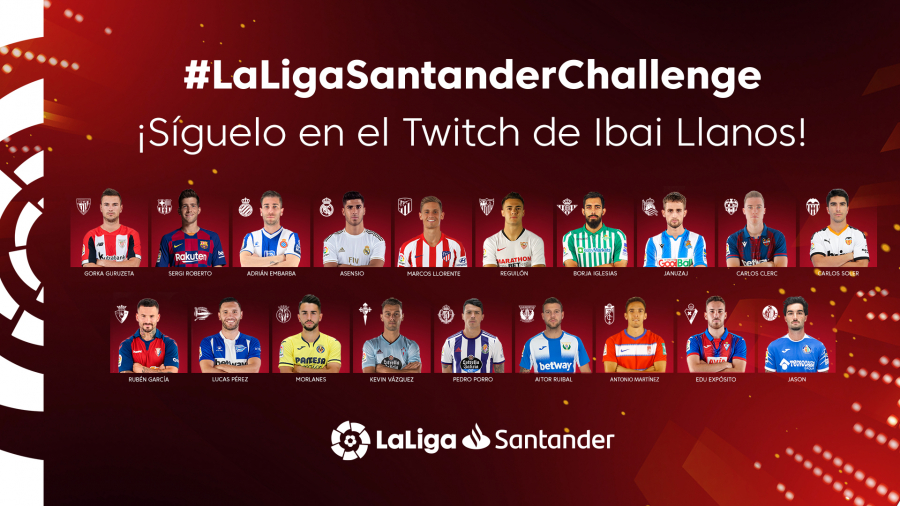 With no football currently being played across most of the world, fans have turned to digital platforms to engage with their favourite competitions and eSports have become an alternative way to continue the action.

This demand for continued digital sports content was underlined by #LaLigaSantanderChallenge, a three-day eSports tournament conceived by the Spanish eSports commentator and influencer Ibai Llanos and executed with the support of LaLiga along with Banco Santander and 18 of the league’s players. Over the course of the competition, it received more than 11 million views via social channels.

Beginning with a single tweet from Llanos on March 16th, within three days the idea turned into a fully-fledged competition that would provide global entertainment and raise vital funds for UNICEF as it continues to battle the global COVID-19 pandemic.

As it grew, national and international broadcast partners of LaLiga also became involved, extending the reach of the competition further.

“Times like these call for creative solutions and we instantly saw the potential of Ibai’s idea,” said Alfredo Bermejo, digital strategy director at LaLiga. “We wanted to do everything we could to help him reach the largest possible audience and raise much needed funds to tackle this health crisis.

Together we brought together a huge network of people that created something positive and memorable.”

Building a global spectacle in three days
LaLiga has built a strong presence in the eSports world over the last three years, in partnership with EA Sports. It launched its rebranded official competition, eLaLiga Santander, at the start of this year with a total of 34 clubs from LaLiga Santander and LaLiga SmartBank signed up - double the amount of the season before. With the league having been postponed on March 13 due to the COVID-19 crisis, it was able to use this platform to help turn Llanos’ idea into reality.

The influencer intended for all games to be available for fans to watch for free via his channel on Twitch, a live streaming service that is mostly used for video games. LaLiga was able to support this through its digital department while also helping with the organisation of the tournament, the setting up of the games and the creation of graphics to support the streams. It then extended distribution through its global social media profiles, which have more than 100 million followers.

Meanwhile, eLaLiga Santander's official provider LVP, Spain’s professional video-gamers league, took charge of the technical production of the event and ensured that followers were offered the best viewing experience, taking charge of the production and distribution of the signal to various streaming channels amongst other tasks.

Named #LaLigaSantander challenge, the tournament gave a global profile to Llanos’ efforts and also formed part of the ‘LaLiga Se Juega en Casa’ (LaLiga is being played at home) campaign, which is providing a series of events to entertain fans who cannot currently see watch live football.

“The power of the movement was extraordinary which allowed us to co-ordinate and confirm all of these elements within a matter of days,” Bermejo added. “This work was crucial in giving the tournament that platform that it ultimately had.”

Over 11 million views and more than €190,000 raised
The tournament began with a draw on March 19th that was watched by a peak of 65,000 people on Ibai’s Twitch platform. The action, which began the day after, was made available through the Facebook, Twitch and YouTube profiles of LaLiga, the Twitch and YouTube profiles of eLaLiga, the league’s OTT platform LaLigaSportsTV and Llanos’ Twitch profile.

Across these channels, viewers accumulated more than 100 million minutes of viewing time during the tournament.

Not included in these figures are the broadcasters who also shared the competition. These included GolTV and Movistar in Spain, while international LaLiga partners including ELEVEN (Belgium, Poland, Portugal), BeIN Sports (USA, France), DirecTV + ESPN (Latam), Sky (Mexico) and iQiyi (China), also showed the matches.

The weekend of action provided hours of entertainment, with Real Madrid’s Marco Asensio emerging victorious. But in addition, the spectators who followed the tournament showed great generosity, donating over €42,000 to UNICEF via the link that was available during all matches. LaLiga and Santander bank added €100,000 to this total to add to the global fight against this pandemic, while further donations were made by influencers and players who took part in the tournament.

“We showed that the football community is a force for good that works together in times of need,” Bermejo concluded. “This kind of global energy will help the sport return stronger than ever in the months ahead.”