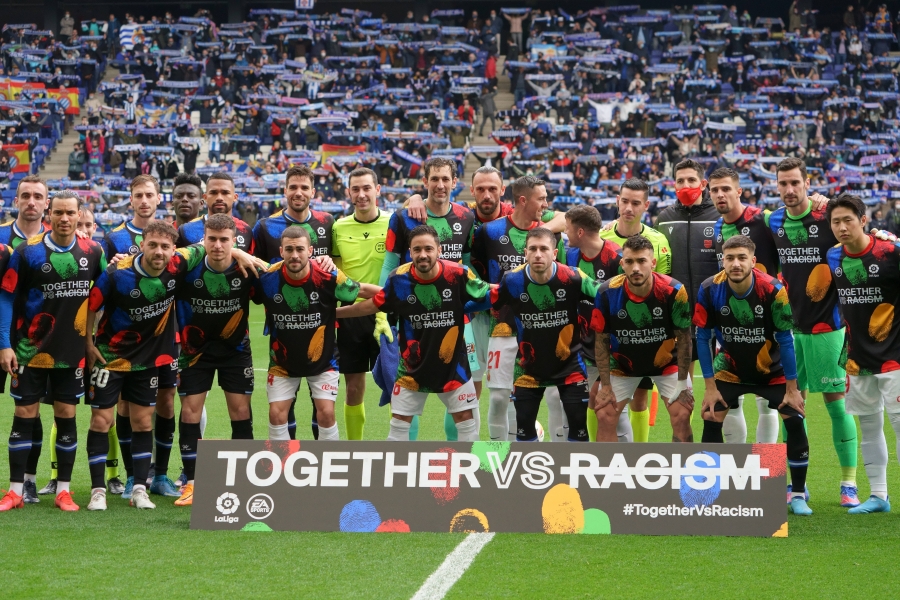 LaLiga Week against Racism, an initiative in partnership with EA SPORTS FIFA 22, has sought to raise awareness of the importance of eradicating racism in all areas of society. The project, which kicked off on 16 March, included online and offline activations that culminated on 21 March, the International Day for the Elimination of Racial Discrimination.

Among the actions that took place during this LaLiga Anti-Racism Week were the creation of an ad hoc kit for EA SPORTS FIFA 22, the development of a social media filter so that everyone could show their support for the initiative from home, special T-shirts for the starting eleven of LaLiga Santander matches, awareness messages on the TV U of all matches or stories from players and coaches telling first person accounts of racist attacks they have suffered or encouraging unity to eradicate racism.

“This initiative is part of many others that LaLiga is carrying out to eradicate racism, such as the condemnation of racist behaviour that occurs in stadiums and the fact that we are acting as a private prosecutor in these cases”, said Javier Tebas, president of LaLiga.

One of the objectives of this campaign has been to raise awareness among as many people as possible, especially the youngest supporters. For them, EA and LaLiga developed an exclusive kit that is available in the game from 16 March, and once received, until the end of the season.

It is a black kit with multi-coloured fingerprints on it, which represent those of players who have suffered a racist act in the past. Players can choose to have their virtual team play in this kit, and with this, allowing them to show their support for the campaign in the fight against racism and to show that together we can defeat it.

In addition to the kit, consumables have been created for EA SPORTS FIFA 22 such as LEDs, banners, TIFOs, Flags, etc. All with the intention of giving maximum visibility to this project and raising awareness among the users of the game. This initiative is an appeal to all those who have experienced any racist act. To them, LaLiga and EA SPORTS say: “Don’t be silent, share your story and make your mark against racism”.

David Jackson, VP Brand, EA SPORTS FIFA, commented: “EA SPORTS are proud partners of LaLiga, support their fight against racism and share a continued commitment to combatting this issue within football and the world at large. The “Together vs Racism” kit is a chance for fans to showcase their support in-game”.

The social network Instagram has also been a platform for this initiative during LaLiga’s Anti-Racism Week. In it, users were able to use the filter created to support the campaign, giving visibility to the hashtag #TogetherVsRacism. The filter is available since the beginning of the campaign and permanently on LaLiga's official profile on the social network. The aim is that the users themselves, through this hashtag, will make their mark against racism, and join a social movement against racism.

Together vs Racism at LaLiga clubs

LaLiga’s Anti-Racism Week was also be reflected by LaLiga Santander and LaLigaSmartBank clubs. They too stand together on a platform to end acts of violence and racism, which even players and coaches themselves have experienced firsthand during their careers or through those around them. They also serve as an inspiration for fans to act to stop violent and racist acts, with messages of encouragement and support to put an end to this despicable behaviour.

Another of the activities that was carried out during this week is directly linked to LaLiga Santander football matches. LaLiga proposed to the clubs that in Matchday 29 games, the starting elevens was take to the pitch wearing the shirts created for this initiative. They are black t-shirts with the message #TogetherVsRacism that include the multi-coloured fingerprints on it.

In addition, anti-racism messages were included on the advertising boards throughout all matches, including ElClásico, as well as virtualised advertising in broadcasts. The aim was, once again, to raise awareness among the public, those in the stadium and those watching the match via national and international broadcasters, to take a further step towards ending racism on and off the pitch.