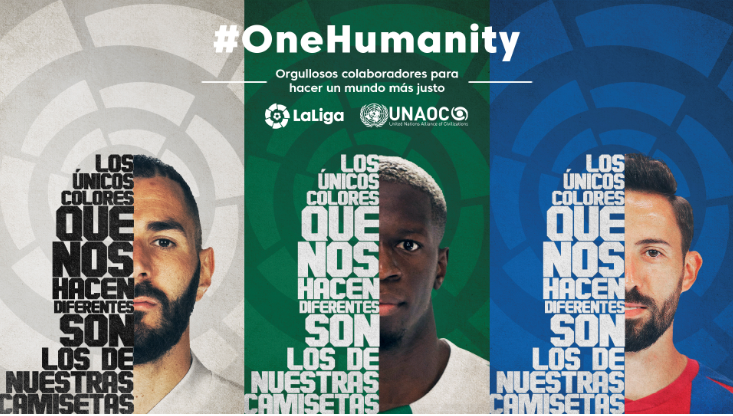 LaLiga and the United Nations Alliance of Civilizations (UNAOC ) have signed a global memorandum of understanding (MoU) through which they will work to promote and raise public awareness around social responsibility.

Under the two-year agreement, both organizations initiate new projects and tools to create meaningful social change, focused on the core issues of promoting education, combating racism and discrimination based on religion, belief ethnicity or gender, social integration and gender equality. All such campaigns will be promoted through the communications channels of LaLiga and the UNAOC to maximise visibility.

The first joint campaign between the two institutions, titled “One Humanity”, was launched to coincide with the signing of the agreement. Featuring the appearance of players from 15 LaLiga Santander clubs, the video provides a strong message of unity regardless of race or gender.

In addition to further communications campaigns, the UNAOC has committed to support LaLiga with its global CSR and educational projects as part of the MoU.

"It is an honor to work with LaLiga on this strategic alliance to help promote a better society, especially through the most loved sport in world, football,” said Miguel Angel Moratinos, High Representative for UNAOC. “It is my hope that this deepened cooperation between UNOAC and LaLiga, a world leader in the leisure and entertainment, helps us towards building a greater community and provides us with a great deal of value.”

For LaLiga, the MoU is the latest in a long list of agreements with the world’s most important organisations and institutions. Working together with governments, leagues, federations and clubs, it aims to create partnerships that will strengthen the sport of football around the world and ensure the game is run according to the best practices.

Javier Tebas, President of LaLiga added: “The transmission of values through all our international alliances is vital. Together with UNAOC and the involvement of all participating clubs, I am positive that we will achieve our goals to foster and spread awareness around equality, diversity and social responsibility.”