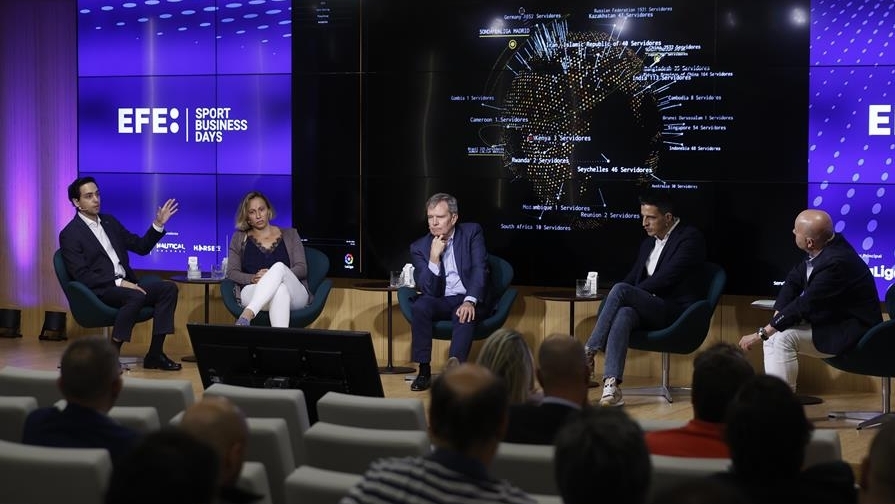 LaLiga Tech's milestones in the fight against piracy: 9 billion euros of assets protected and more than one million videos removed from YouTube

LaLiga’s fight against piracy has led LaLiga Tech to remove, in just the past season, more than 1,065,000 videos on YouTube, more than 368,000 videos on other social networks, more than 75,800 websites from Google’s search results and more than 820 mobile applications that were used to view pirated content. These numbers were presented by Guillermo Rodríguez, the director of anti-piracy operations at LaLiga Content Protection, during the fifth EFE Sport Business Days Forum and the talk titled ‘Sportech, technology in sports business’.

One of the first topics addressed at the event was the impact of piracy on society as a whole and on LaLiga. Citing data from the European Intellectual Property Office, Rodríguez said: “Piracy causes losses of more than 60 billion euros and more than 400,000 jobs in Europe every year. It is a global problem that affects all levels of society, from the competitions that own the rights to society through the taxes that are not paid, the criminal activities that are related to piracy and the impact that the job losses have.”

How LaLiga protects itself against pirates

LaLiga Tech, the technological subsidiary of LaLiga launched in September of 2021, acts in a 360° way wherever piracy is being commercialised, distributed or promoted on the internet. This affects search engines, websites, mobile apps and social media. LaLiga Tech “works with more than 70 social media platforms with which we have collaboration agreements to act in the quickest possible time against piracy”, while the approach also affects marketplaces, the spaces where different types of products can be bought and sold, Rodríguez said.

“Pirates are constantly evolving, because the channels used today are not the same ones that will be used tomorrow," Rodríguez said. “Right now, the anti-piracy department will act against any type of intellectual property infringement, both live or on-demand, because piracy does not end when a match or a competition ends, as pirates will continue with clips, fake profiles or other activities that they use to monetise.”

As well as the efforts in Content Protection, LaLiga Tech has also added Brand Protection services to its offering, which refer to “brand abuses, whether trademarks, copyright violations or industrial design and patent violation”. In addition, “tools have been developed against the counterfeit of physical goods, for football clubs and for sporting equipment in gyms”.

How is all this carried out? At the ‘Sportech, technology in sports business' panel, Rodríguez explained: “We have developed a series of tools and currently have two laboratories. One laboratory is in Madrid and the other in Mexico, which allows us to cover the entire region of the Americas, where we have great demand and where there has been a great response to our anti-piracy solutions.”

These tools include Marauder (which detects content on social media platforms, apps and websites), Lumière (which searches for pirate servers that host protected content) and Blackhole (which identifies IPTV television servers), which are just some of the many instruments LaLiga Tech uses to fight against piracy. Fuoco, which specialises in the fight against counterfeit physical products, has now been added to this range of tools. “Depending on the type of piracy we deal with, we use one type of tool or another,” the director added.

LaLiga Tech's clients include other sporting competitions and federations, such as the Jupiler Pro League, the Royal Belgian Football Federation and the World Padel Tour, as well as rights holders such as Dorna Sports, Millicom or Sky Mexico. LaLiga Tech is the only offering technology designed exclusively for the sports and entertainment sector. Adding together all the companies that use LaLiga Tech, “we protect assets that are valued at more than 9 billion euros combined against piracy”.

In terms of enforcement, the director of anti-piracy operations at LaLiga Content Protection pointed out the importance of expanding efforts when there are major events. He said: “A major sporting event, whether it's the Champions League final, the Super Bowl or ElClasico, is content that is in high demand. There is a spike in pirated content available for fans to consume and the pirates know this. We, for ElClasico, add extra resources to the cybersecurity team, which is working in real time, so that we can act against all the infringements that are going to happen on the network.”

Rodríguez then finalised his commentary by saying: “Piracy doesn’t understand countries or borders, it is a global problem. There may be certain areas of the world where there is more infrastructure or where legislation is laxer in terms of intellectual property, but we are often surprised when analysing where the servers that facilitate pirate consumption are located. The locations of the servers are diverse, ranging from Kenya to Seychelles to Kazakhstan, while Germany, for example, has almost 1,700 servers. We have them closer than we can imagine.”