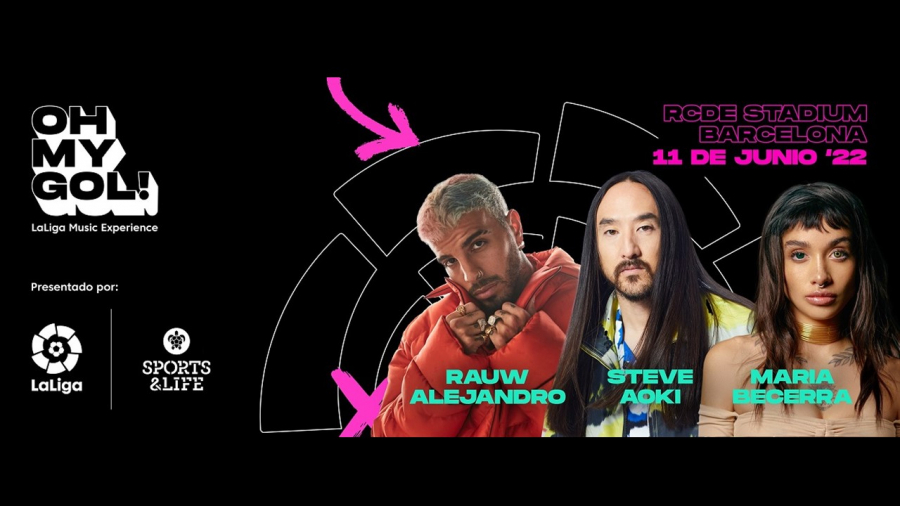 As part of the mission to keep offering the freshest entertainment experiences for its fans, especially younger audiences, LaLiga has joined forces with Sports&Life to create its first official megaconcert, with various world-famous international artists scheduled to take part. The first edition of this new event, which is called ‘Oh my Gol! LaLiga Music Experience’, will take place on 11 June 2022 at the RCDE Stadium in Barcelona, with the setlist to be headlined by Rauw Alejandro, María Becerra and Steve Aoki.

‘Oh my Gol! LaLiga Music Experience’ will be an annual event, one that will change its venue each year and always be held at a LaLiga Santander stadium, with RCD Espanyol’s home ground hosting the inaugural edition. The organisation and production of these concerts will be overseen by Sports&Life, footballer Andrés Iniesta’s own agency, as they have agreed to take on this exciting challenge for the next three seasons.

Discussing this project, Sports&Life Director Vicenç Fàbregas said: “This is a unique event and an unprecedented kind of musical experience for Spain. The boundaries within the entertainment sector are becoming increasingly blurred. Our objective is to offer a unique experience with the best and most current artists, doing so alongside LaLiga to bring football and music lovers together through an unrivalled show.”

LaLiga Executive Director Óscar Mayo also had his say on this collaboration, stating: “With this initiative, LaLiga wants to keep uniting football with excitement, this time through music, which is a universal language that is closely linked to our sport and that is part of LaLiga’s DNA. We are convinced, thanks to the work of Sports&Life, that this will be a great success.”

In just a couple of years, Puerto Rican artist Rauw Alejandro has carved out a place in urban music and has worked with stars like Jennifer López, Selena Gómez and Camilo, reaching 36 million monthly listeners on Spotify. His song ‘Todo de Ti’ has won various awards and is recognised around the world.

Argentine singer María Becerra has exploded onto the Latin music scene this year, after beginning her career as a social media star. Her collaborations on songs such as ‘¿Qué más pues?’ by J Balvin and ‘Wow Wow’ by Becky G have positioned her as one of the Latin American artists with the brightest future. Her fans love her social media activity, with Becerra having more than seven million followers on Instagram alone.

Another of the headline acts is Steve Aoki, who is considered one of the top 10 DJs in the world by DJ Mag. After being nominated for the Grammy Award for the Best Dance/Electronica Album of 2013, Aoki has performed at the best clubs and festivals around the globe, including Coachella, Glastonbury and Tomorrowland. The American artist has made each set more than a music show, while he has also collaborated with Will.I.AM, LMFAO, Kid Cudi and Travis Barker, among others.