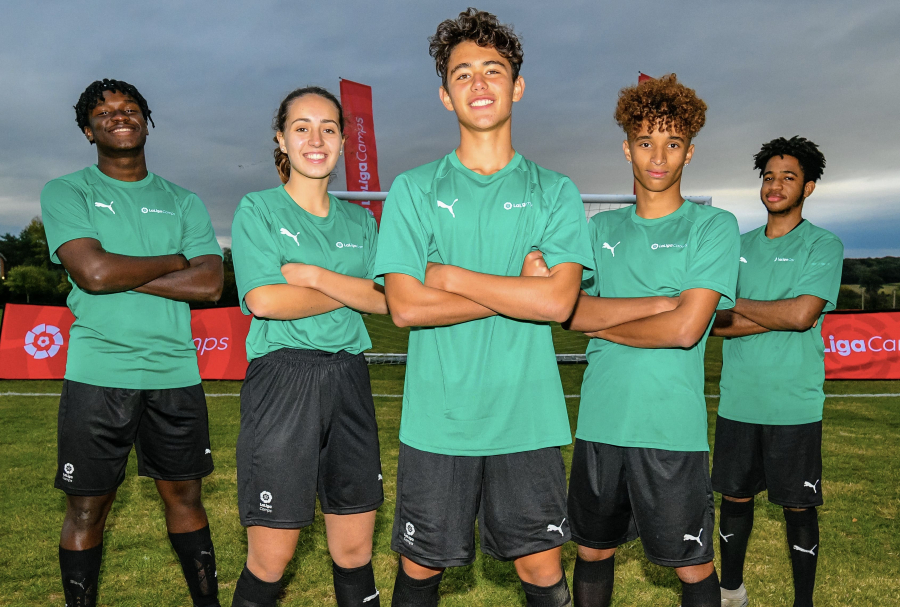 LaLiga launches new sporting projects in the UK and Brazil

Spanish football is known around the world for its unique style, a fact that does not come from chance but from careful design.

Having developed its distinct coaching style in coordination with clubs and UEFA Pro-licensed coaches, LaLiga has made Spanish football a part of its international brand, offering unique experiences to youngsters worldwide who want to learn how to play like some of their biggest idols.

With new sporting projects about to arrive in the United Kingdom and Brazil, these opportunities will be increased in two of the biggest footballing markets worldwide.

In the UK, LaLiga has agreed a multi-year partnership with Swerve Soccer and Bede’s Summer School to bring LaLiga’s coaching methodology to football camps in the south of England, while at the same time launching a LaLiga Football Schools programme across Brazil in partnership with Think Sports.

Placing its coaches in each market and working in collaboration with local trainers, LaLiga has reached tens of thousands of young boys and girls, while at the same time building new collaborations with organisations to grow the sport of football worldwide.

Bringing Spanish football coaching to the UK for the first time
LaLiga Camps UK, created in partnership with Swerve Soccer, marks the first time that LaLiga sporting projects have arrived in Western Europe and in the birthplace of football, the United Kingdom.

The idea will offer youngsters between the ages of 12 and 17 the chance to attend residential camps, with participants able to select between three different types of course: ‘Complete Football’, ‘Football and Language’ and ‘Goalkeeper Specific’. An additional ‘Day Camp’ category will allow local players the opportunity to attend from early morning to late afternoon.

English and Spanish-language education will be offered, as well as a chance for selected players to attend a 10-day training programme with the youth team of a LaLiga club in Spain.

Óscar Mayo, LaLiga’s director of business, marketing, and international development, said: “We are proud to open LaLiga’s first sporting development project in the birthplace of football, the United Kingdom. Together with our partners Swerve Soccer and Bede’s School, we look forward to providing world-class opportunities for players to develop and learn from Spanish football coaches using the LaLiga methodology.”

Oliver Davies, director of Swerve Soccer added: “We are delighted to join LaLiga as a prestigious partner offering unique opportunities for young footballers, as part of our commitment to high-quality training programmes for aspiring professionals, all whilst positioning Spain as an attractive destination for players from across the globe.”

Adapting LaLiga’s coaching methodology to Brazil
In the football hotbed of Brazil, LaLiga will design a LaLiga Football Schools programme along with partners Think Sport, welcoming boys and girls aged between four and 17. Similar to previous projects that have been created in India, LaLiga Football Schools will count on the expertise of LaLiga technical directors who oversee the implementation and adaptation of the LaLiga coaching methodology.

The first courses are set to take place this year in São Paulo, Rio de Janeiro, Paraná, Espírito Santo and Minas Gerais, with plans for potential expansion in the future.

As Arthur Borelli, CEO of Think Sports, said: “To have the opportunity to develop a programme as serious and comprehensive as LaLiga Football Schools in Brazil is, more than being a recognition of Think Sports' expertise in the world of sports methodology, a special challenge. I am sure that, thanks to our experience running other sporting programmes in the country over the last few years, we will transform the lives of young people and children from all over the country in an environment that is fun, joyful, respectful, educational, unique and, of course, dedicated to top-quality football.”

Albert Castelló, LaLiga's Delegate in Brazil, added: “The application of the LaLiga methodology, adapted to the reality of this country, will bring these young people footballing experiences and concepts from Spain and this will contribute to their overall development.”

Arriving in Brazil and the UK underlines the appeal that the Spanish game continues to have in even the most mature football markets. Working alongside local experts, LaLiga will apply the knowledge it has built up over years to help add a new dimension to local playing styles and increase the love of football further.