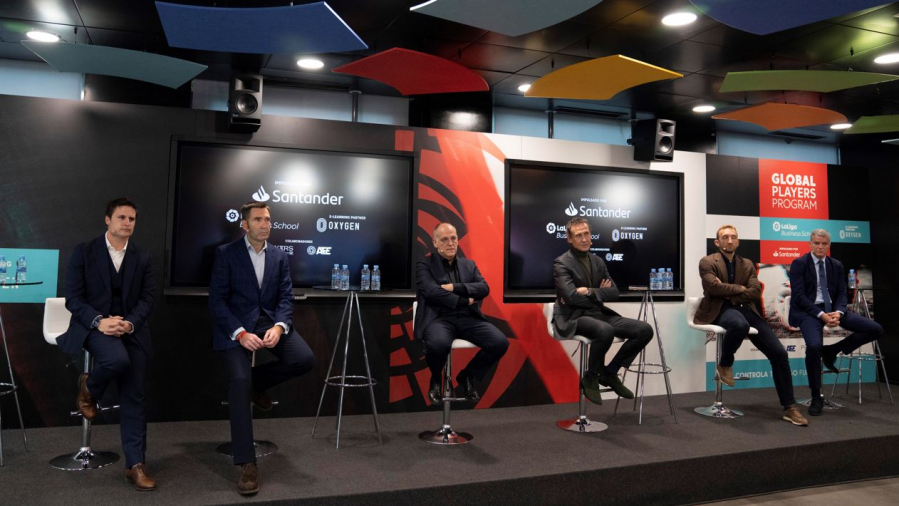 Through its educational department LaLiga Business School, LaLiga is preparing the 'Global Players Program' course for players in LaLiga Santander and LaLiga SmartBank leagues. Promoted by Banco Santander, with Oxygen as the eLearning partner and in collaboration with AFE (Spanish Footballers Association) and Players App, with this important initiative, LaLiga is taking a step further in terms of training by focusing on football players and investing in their present and future opportunities in the sports industry to create an alternative to their current profession.

The ‘Global Players Program’ is an educational program aimed at providing players with the knowledge and tools they need to develop professionally, both in their industry and elsewhere, and both during and at the end of their playing careers. The goal of this program, the first of its kind among the major European leagues, is to advise each player on where to focus their professional career at the end of their sporting career. In addition, Alberto García, former Rayo Vallecano goalkeeper, will be the adviser of the program, who will provide the vision of a professional football player recently retiring, adding even more value to the training.

For Javier Tebas, "this is a logical step for us, because since 2018 we have been concerned and involved in the training of new professionals for the industry. LaLiga footballers already have knowledge that is very valuable for the sector, but with this training we are offering them a pioneering opportunity once their football career is over".

According to Felipe Martín, Director of Sponsorships and Events at Santander Spain: "We are proud to promote a pioneering initiative like this. At Banco Santander, we have long believed in and supported training as a fundamental tool to generate a better future.  In this sense, being able to promote an educational program for professional footballers together with LaLiga is a very important milestone for us".

"As a result of an exhaustive market survey on the sports industry and the crossover with the education industry, we came to understand that there are huge unmet needs and big problems to solve: to support professional athletes, to contribute to the massive professionalisation of the sports industry and to provide functional tools to professional players in the industry. In this context, we created Oxygen, a vehicle to solve these problems and attack the opportunity", explained Jorge Valdano, founding partner of Oxygen.

Taking into account the football players' work schedules, the course will be taught in different formats (face-to-face, streaming and on-line) so that players can make their training and matches compatible with their academic calendar. To this end, the classes will be recorded and the timing of the evaluations will be adapted to the footballers' work schedules.

In addition, course members will receive personal attention from a team of teachers and tutors throughout the program.

For their part, Luis Gil, director of Competitions and the LaLiga Player's Office, and Diego Rivas, secretary general of AFE, wanted to highlight the leading role of the players themselves, since "the program has been created with them in mind, with their availability, respecting their time and proposing topics that are sure to be of interest to them". "It is very important for us to have created training by and for professional players, making us a pioneering league in this sense and demonstrating that the well-being of our footballers is our greatest concern".

The first phase, delivered in an online format, will focus on personal development and will begin in February 2022.

At the same time and until the month of June, there will be 6 webinars focused on knowledge of the working environment so participating footballers will become familiar with the development axes of the sports industry. Finally, to end the academic course, four days of face-to-face masterclasses will be held for footballers at the headquarters of LaLiga. All LaLiga players who wish to do so can register for the admission process through the ‘Global Players Program’ tab on the Players App, a mobile application exclusively for LaLiga players that offers statistics, videos, and services for their personal and leisure life.

For Óscar Mayo, executive general manager of LaLiga, "this course is further evidence of LaLiga's involvement with its players. With this training, totally designed and adapted for football players, we are offering an alternative for LaLiga players so they can combine their football career with basic knowledge of the sports industry".

Furthermore, during this season Sergio González, CD Leganés player, will study the Master in Law applied to Professional Football. Finally, the LaLiga International MBA will have two students of the highest level: the Real Valladolid goalkeeper, Roberto Jiménez, and the Spanish Manchester United player, Juan Mata.

With all these examples, LaLiga Business School shows that it is a real alternative for football players and ex-footballers and, with the course ‘Global Players Program’, it is demonstrating its commitment to ensuring that, once their time as professional footballers is over, players have a real alternative so they can continue being part of the sports industry.