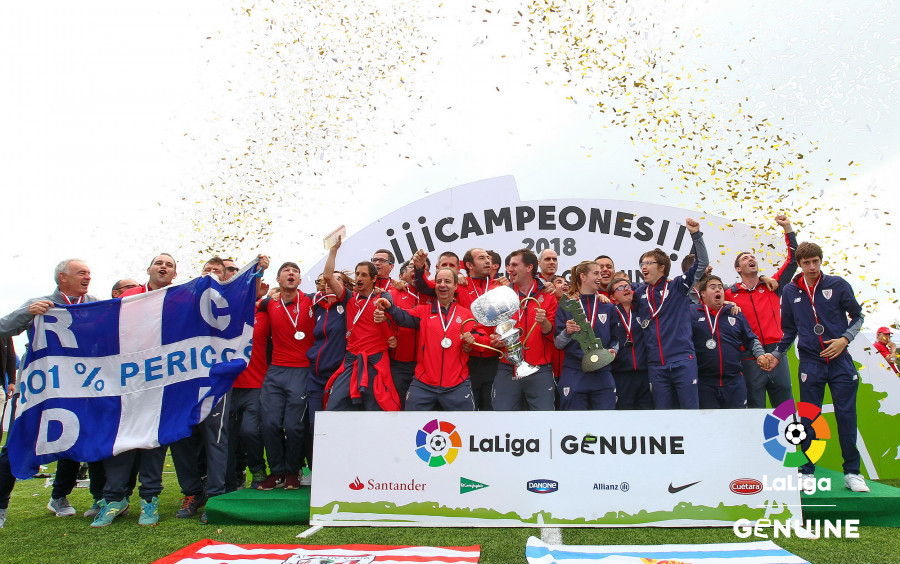 LaLiga Genuine has captured the heart of Spanish sport with its project which is now garnering international interest.

It is a football league which is composed of teams consisting of players with intellectual disabilities, with a commitment towards diversity and inclusion.

This integral initiative has been pioneered by LaLiga through its Foundation and already has 30 teams registered for the 2018/19 season, 12 more than took part in the first campaign.

The growth appears unstoppable for a project that, as league president Javier Tebas stated, ‘will be part of LaLiga forever’.

Games are played under Football 8 rules, with matches consisting of four quarters, each of which lasts 10 minutes.

In LaLiga Genuine, it isn’t just the results on the field which matter but the attitude which also counts and players and coaches who promote and practice fair play can allow teams to gain extra points.

The teams, which are made up of players over the age of 16 and with a minimum intellectual disability of 33 percent, have displayed their commitment and camaraderie from the first day, bringing a great atmosphere and soul to the playing field.

“It is a precious initiative that will give so much to so many people,” explained Lucas Rodriguez, who oversees Malaga CF’s EDI Foundation, one of the sides who will take part this season.

“We loved the idea after it was introduced by LaLiga and saw the results that have been achieved in normalising taking part in sport for boys and girls with intellectual disabilities so we began to prepare our team.”

Participating clubs are excited about the season ahead and are proud to be taking part in such a competition.

“In the meetings that we have had with the players and their families, we told them that it is the most important social project for the club and the all departments are involved,” Lucas Rodriguez continued.

“LaLiga Genuine will bring us many positive things and we aspire to continue growing. In fact, more and more people are interested in joining.

“Among the values that we promote as part of it are respect, fair play, companionship and the importance of a good diet and loving yourself.”

Malaga are one of 12 new clubs who will make up a list of 30 who, beyond competing, will share special experiences and unforgettable memories.

LaLiga is committed to being an agent of social change with initiatives such as LaLiga Genuine, a project which has crossed borders.

For example, in Mexico, America, one of the most important clubs on the continent, have shared their admiration for a project that they feel deserves praise.

LaLiga have taken the message to the world with innovative and emotional actions that have permeated society.

That is emphasised with the ‘Boots of Desires’ campaign, in which LaLiga Genuine players received a gift of boots with special phrases adorned on them, ones which users have posted on social media under the hashtag #HappyGenuine because above all, LaLiga Genuine is about happiness and sport in its purest form.