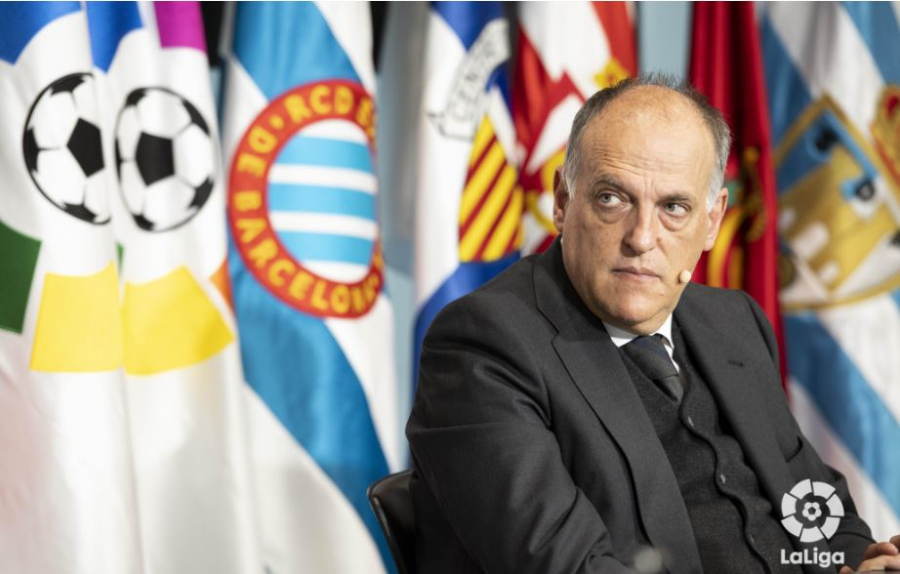 The threat of a new breakaway competition, separating the richest clubs from the rest of the pyramid, has been present in football for many years. During this time, LaLiga and other leaders in football have been loudly opposing the idea, working with stakeholders across the industry to underline the need to maintain the sporting integrity of competitions.

As a result, when the proposal for a breakaway competition finally came, it was met with a swift and strong international response.

“We have heard about a breakaway league for 25 years, but when it came to a head, within 48 hours it had dissolved like a lump of sugar,” said LaLiga President Javier Tebas in a press conference attended by hundreds of international media. “Fans moved quickly and politicians got involved, even Presidents.”

To explain the weight of opposition against the project and to discuss the appropriate next steps for the football industry, Tebas addressed the media alongside the club Presidents of Levante UD, Real Betis, Sevilla FC, Valencia CF and Villarreal CF, who pinpointed the fundamental rules of European football that must be maintained: sporting merit, connection to fans and financial responsibility.

One of the principal concerns with the breakaway plan is the closed nature of the proposed competition, meaning the largest teams would be protected against relegation and would maintain their place regardless of performance, at the expense of others.

“All teams have the opportunity to reach the top and we cannot destroy this,” said José Castro, President of Sevilla FC. “We earned our prestige on the pitch and we want to keep it that way.”

“The approach left out the key protagonist, the fans,” added Real Betis President Ángel Haro. “This would have destroyed the dreams of fans and clubs that one day they can play in the best competitons.”

Beyond this, the 39 LaLiga clubs not invited to join the breakaway league issued a joint statement unanimously rejecting the format, highlighting: “a closed, elitist league is unviable and unwanted.”

“We hope that those still in favour consider their position, continued Anil Murthy, President of Valencia CF. “This has damaged football. We should look at how to move forward in a unified manner.”

A league of PowerPoints

Another of the key criticisms of the breakaway league was its financial planning. As well as promising prize money several times that of the existing European competitions, the project claimed to be coming to the rescue of the industry, with general statements about supporting the wider pyramid, grassroots football and the women’s game.

“If it was so good for football they would not have done it behind our backs in a hidden way, Tebas said. “The financial figures are made up, it’s a league of PowerPoints."

There is not that much money in TV rights in all the world to pay what they're promising. So it's all a lie.”

“The idea of trickle down support for the whole pyramid is not realistic,” added Francisco Catalan, Levante UD President. “For someone to become a league champion you need the support of everyone else playing. Maybe it could work in short term but would be a long-term failure.”

The negative portrayal of football’s current finances was also contested during the event.

“Spanish football has not relied on external subsidies during the Covid crisis,” added Fernando Roig, President of Villarreal CF. “The royal decree passed in Spain has given everyone the opportunity to compete better. There gap is still closing but we are all working to control our revenue and expenses.”

“Large clubs have larger infrastructures and larger expenses and overheads,” Tebas said. “But their revenues had been growing over time before Covid. They had not generated losses before Covid. I would like the organisers of the breakaway league to do a proper analysis.”

Regarding measures that can be taken to move the industry forward, the attendees stressed the need for financial responsibility to return to the top of the agenda across all European football. This contradicts claims made by the breakaway league organisers that the biggest clubs required more revenue to sustain themselves.

“This period of Covid has not just affected football clubs but all businesses,” explained Roig. “As revenue goes down, you have to manage costs and work smarter. This is a requirement of everyone.”

“What we need to learn is to come out of this with solidarity and cooperation, which is not what the super league expressed,” Haro added. “We should not be looking to increase revenues at the top, but to control costs.”

LaLiga has maintained its system of economic control throughout the pandemic to ensure that spending across Spanish clubs remained in line with incomes. Having recently been appointed to UEFA’s Executive Committee, Tebas plans to further promote this approach among leagues across Europe.

“The problem is not revenue, Tebas said. “If big clubs earn more money, they will still want more. They should control their expenses, not focus on revenues. “Expenditure should be better controlled, and wealth should be better divided among clubs.”

Despite describing the current breakaway proposal as “dead”, Tebas is focused on creating new measures that will preserve the and strengthen the European football model for the next generation.

“We are looking for protective measures and regulations to stop this happening again,” he said. “The whole ecosystem of European football needs to be defined by sporting merit.

“When a smaller club reaches a big European semi-final or final, this is what fans dream about.  This is worth more than any short-term financial benefit.”