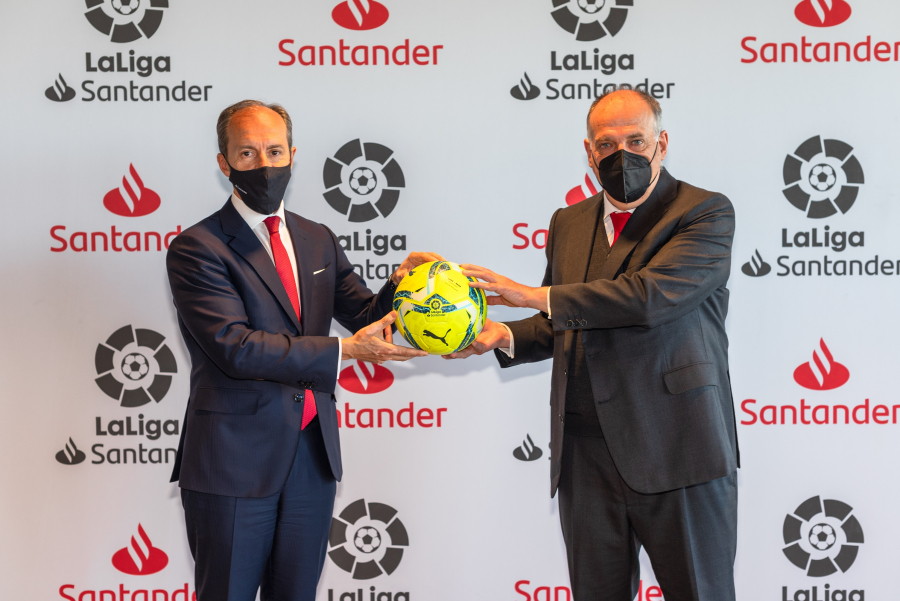 LaLiga and Banco Santander have renewed their collaboration agreement for a further two years, with the option to extend for a further year until 2023-24, continuing a strategic relationship for both entities that began in 2016.

With this renewal, Banco Santander has demonstrated its confidence in LaLiga to continue growing by giving its name to the entity's two competitions: LaLiga Santander and LaLiga SmartBank.

Within the agreement, both organisations will continue to expand the brand of Spain throughout the world and share the positive values ​​associated with sport and football in particular, while demonstrating continuity, commitment and hope after a complicated year for the industry.

Javier Tebas, President of LaLiga and Rami Aboukhair, CEO of Santander Spain, agreed on the significance of the agreement, especially considering the current pandemic, adding that the renewal of this collaboration between two such important organisations is an endorsement and validation of the work that has been carried out so far.

“This agreement is fundamental for us,” Tebas said. “At this time, being able to continue counting on our main sponsor, Banco Santander, is the affirmation that we are on the right path. Banco Santander is a leading company in its sector that has decided to choose LaLiga as its main partner in the world of sports, which is a source of infinite pride to us.”

Rami Aboukhair added: “We are very proud to continue providing our name to the best league in the world, LaLiga Santander. Football reflects the brand of Spain and the matches bring friends and family together. This represents values with which all of us who work at Banco Santander feel very connected, such as effort, teamwork or commitment.”

During their partnership LaLiga and Banco Santander have seen the reach and audience of Spanish football grow exponentially. In the 2019/2020 season, LaLiga reached a cumulative audience of 2.8 billion people around the world, up from 2.7 billion the season before and 2.6 billion in 2016-17.

The new agreement represents an opportunity to add to this global exposure as LaLiga is present in 44 countries and can be seen in more than 190. The international reach of LaLiga Santander and LaLiga SmartBank is also reflected in the more than 130 million followers in LaLiga social networks.