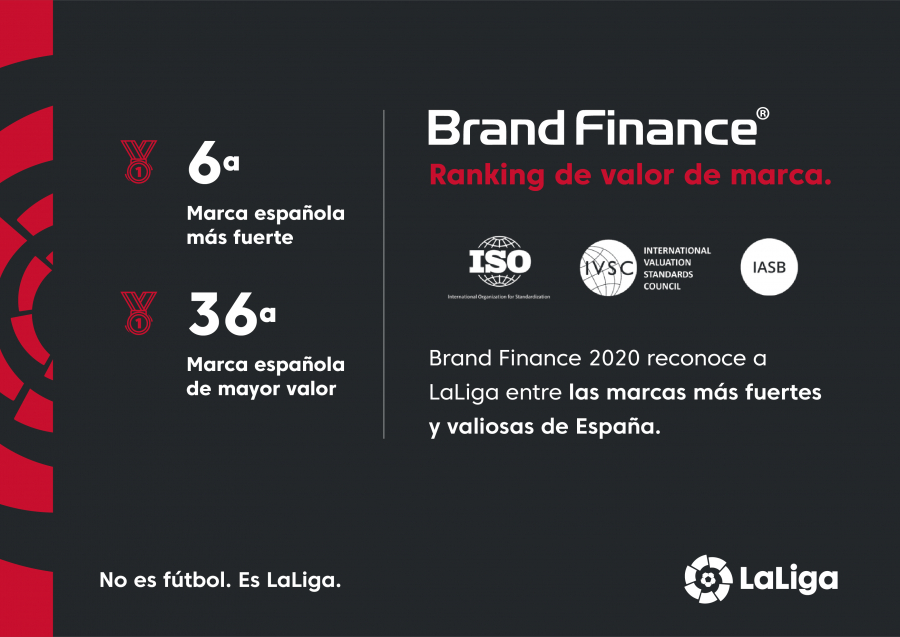 LaLiga is not only renowned as a world-class football competition but, according to a new study, it also has a growing reputation at the brand level.

Every year, the global consultancy group Brand Finance calculates the Brand Strength Index of the world’s leading companies and organisations, awarding a score out of 100. For 2020, LaLiga has received a score of 81.7 meaning that the competition has moved up from eighth in the Spanish rankings to sixth, only behind BBVA, NH Hotels, Mercadona, Loewe and Stradivarius.

In addition, LaLiga remains one of the few organisations to be awarded the top ‘AAA’ rating by Brand Finance.

The Brand Strength Index is calculated by measuring the relative strength of brands through a balanced scorecard of metrics that evaluate areas such as marketing investment, stakeholder equity and business performance.

LaLiga is the only sports competition to appear in Brand Finance’s rankings anywhere in the world, which reflects the success of the competition’s own initiatives as well as underlining the importance of football to the international image of Spain.

“We continue to focus on building our brand identity and the value it represents; this ranking shows we are making good progress,” said Enrique Moreno, LaLiga’s global brand director. “Under our tagline ‘It’s not football. It’s LaLiga.’ we have shown that our competition represents more than a sport and that LaLiga can positively impact all of society. Our initiatives beyond the competition itself positively impact the image of Spain as well as our visibility around the world.”

Rapid rise in value
As well as climbing the Brand Strength Index, LaLiga has shot up the Brand Value charts of the latest Brand Finance report, with a 34 percent increase in LaLiga’s brand value over the past year. This has seen the league climb 13 spots in the Brand Value ranking, from 49th in 2019 to 36th in 2020.

Last year was the first time that a sporting competition had featured among Brand Finance’s global rankings and since then LaLiga’s reputation has increased. Even before considering the values of Spanish clubs, professional football plays an enormous part of Spanish society.
As the Brand Finance report stated: “Football unquestionably forms part of the leisure sector in Spain and LaLiga is one of the most highly regarded competitions on an international level.”

Important milestones in 2019
In the past year, LaLiga has made significant progress in further developing the brand of LaLiga and expanding its audience worldwide. For example, the competition surpassed 100 million global followers on social media, while new offices in cities such as London and Mexico City further increased its commercial potential.

In addition, the league created a new sound identity with the help of composer Lucas Vidal, which has now become a central part of LaLiga broadcasts and other video materials. Incorporating sounds from the heartbeat of babies in the womb to the applause of fans in the stand, the track helps to express the identity of LaLiga and grow its recognition among football fans worldwide.

Sharing best practice
LaLiga has also continued its efforts to share best practice and growth strategies with other competitions around the world as it seeks to further professionalise the sports and wider entertainment industry. At the end of 2019, for example, LaLiga played a leading role in the Korean Baseball Organization’s (KBO) ‘Winter Meeting’, giving a presentation that explained how building a brand identity has helped to increase its profile outside of Spain.

In total the league has 32 ‘memorandum of understanding’ partnerships with other global competitions through which it runs joint workshops, events and shares relevant tools. Principally designed to strengthen these competitions at a local level, this has also allowed LaLiga to build awareness with fans in a wide number of markets.

“We have targeted strategies that are specialised for different regions,” Moreno added. “In the global entertainment industry, brands must be authentic and have a clear local value proposition to be successful. This is achieved by being relevant in each market. By maintaining this focus will can keep attracting new opportunities.”