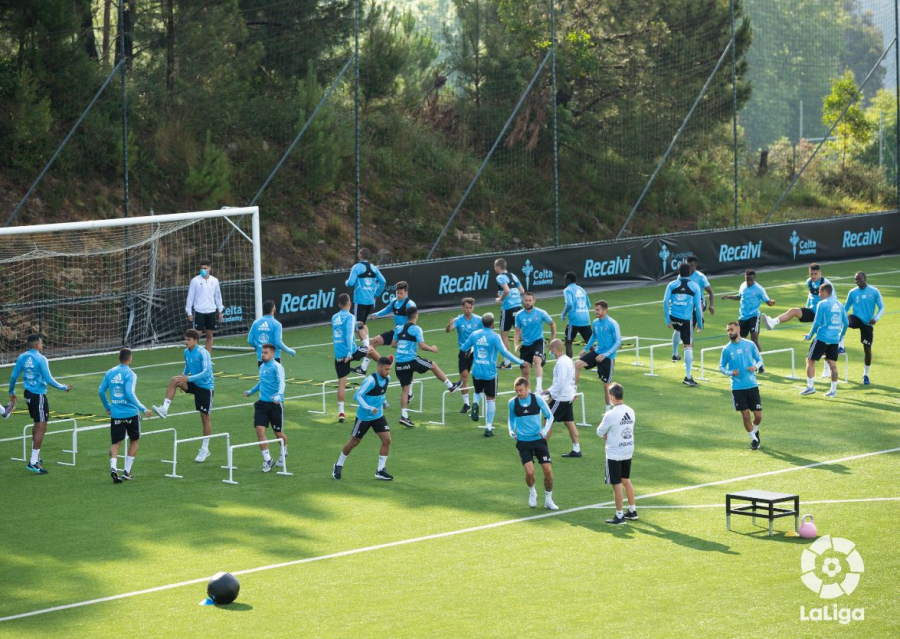 Inside LaLiga’s Return to Training Protocol

After more than two months, full squad training sessions have resumed at Spanish professional football clubs. This latest step, the last before competition can return, is the result of effective collaboration between LaLiga, clubs and health authorities. All of these groups have been able to follow the same guidelines and best practice, thanks to an extensive Protocol developed by LaLiga with clubs and the government.

After competition was postponed in March due to the COVID-19 pandemic, the league began creating its Return to Training Protocol, consulting with medical authorities on the right measures to take to ensure football could be resumed with the lowest risk possible and that clubs could progress at the same rate.

LaLiga created a working group with the intention that, once the return training was approved, all the details would be prepared in the Protocol and could be applied both to the facilities and to the training itself. Throughout its development and application, this working group has included epidemiological experts and club professionals, including those working in sports medicine and physical preparation.

Over subsequent weeks, clubs were consulted about how the Protocol would be carried out, while LaLiga secured the approval of sports and health authorities to ensure that all parties would take a consistent approach.

Since May, this Protocol has been in active use, closely following the Spanish government’s own de-escalation from the pandemic. This has helped to ensure that, as the country emerges from lockdown measures and economic activity resumes, the competition has been in position to return with the minimum of disruption, both in a sporting and economic sense, while protecting players, coaches and employees.

As Victor Martín, director of the Presidential Cabinet at LaLiga, explained: “Since the beginning of this health emergency, LaLiga has assumed the responsibility of completing the season. With that final objective in mind, we established the goals that the Protocol should meet to allow a return to training as soon as the health authorities allowed it.”

“The Protocol has been applied to ensure the maximum safety of players, technical staff and employees of clubs who have worked in coordination with LaLiga. In addition, we wanted to ensure that all 42 clubs would follow the same rules and start from the same position.

“Last but not least, the protocol safeguards the financial health of the competition. We cannot forget that the professional football industry in Spain generates 185,000 jobs, € 4.1 billion in taxes and a turnover equivalent to 1.37% of the GDP of Spain.”

Moving through stages
LaLiga’s Protocol is broken down into four distinct phases which has helped for a careful and gradual return to action.

One of the first key dates in the process was Monday, May 4th. It was announced then that Spain’s professional clubs could begin stage one of the Protocol, with initial player testing and preparation of facilities taking place. All players who tested negative for COVID-19 were then allowed begin phase two of the Protocol, individual training at club facilities.

Five positive cases came back from the testing in stage one, with each player asymptomatic. Following the guidelines of the Protocol, these affected players did not join training but remained at home, only joining their colleagues after twice testing negative for COVID-19.

Martín added: “This protocol is strongest it can be. Detailed work has been done to analyse any health security issues that may arise so that they can be prevented. Zero risk does not exist and LaLiga is aware of this, but the Protocol has limited it. Expert epidemiologists, safety experts and club medics and physios have contributed to the Protocol.

“Applying the Protocol has been an education process for the clubs but we have supplied extensive materials that make the information clear. For ongoing communication, we have assigned somebody from LaLiga to work with each club daily. Ultimately, communication is flowing easily because we all have the shared goal of reaching June in a position to open the stadiums to play football.”

The individual training sessions marked the first time that players had returned to their club facilities in almost two months and a series of new health and safety measures were in place.

These included maintaining social distancing from other players, arriving already wearing the day’s kit and always using the same car.

Luis Gil, LaLiga’s head of competition, continued: “Playing sport and taking health precautions are not incompatible but we know there are some changes that we all have to get used to. Masks, gloves and hydroalcoholic gels are now part of our day to day. As we see it, players have already fully adapted. It has been an exercise in responsibility and teamwork between player and club and between LaLiga and clubs.”

Training in functional groups
The next key date in the process was Monday, May 18th, when clubs entered stage three with the resumption of group training. This was made possible after the government passed a new order permitting the increased practise of professional sport.

For this stage, players were divided into ‘functional groups’ of up to 10 players, which were designed to enable collective activity without increasing risk. These groups always stayed together, from arriving at the facilities to mealtimes to training activities. Training could therefore become more intense, with increased contact and levels of competition, while ensuring that any potential infection would be localised to a specific group.

Working in groups is one of the key concepts of the Protocol,” said Jaime Blanco of the LaLiga presidents’ office. “It limits the risk of contact and allows us to detect and isolate any positive cases. Phase three is very important because that is when the normal practice of football really started to develop. Players begin to make the physical contact that is typical of this sport and their levels of concentration can increase, helping to remove the tension that may have built up during this period of confinement.”

On 23rd May came the news that all clubs had been waiting for. The Spanish government gave the green light to resume LaLiga competition from 8th June, with matches played behind closed doors and strict health and safety measures in place.

Therefore, as of 1st June, clubs can enter stage four where full training sessions will resume, described in the Protocol as “a real and total return to training by the whole squad.”

“We are facing an unknown situation so have taken all necessary measures to guarantee the safety of everybody who is part of this process,” Blanco added. “We have taken the maximum precautions in health, safety, cleanliness, hygiene and social distancing. The health recommendations are based on those given by the Ministry of Health but have been expanded in our Protocol to ensure they apply to professional sport.”

“Resuming the competition depends on everyone complying with the Protocol with the utmost care, leaving nothing to chance and being prepared to make sacrifices,” Gil concluded. “There has been a big effort from the players but also the technicians, cleaners, medical services and operating personnel of the clubs. There are many people involved who are committed to making this happen.”