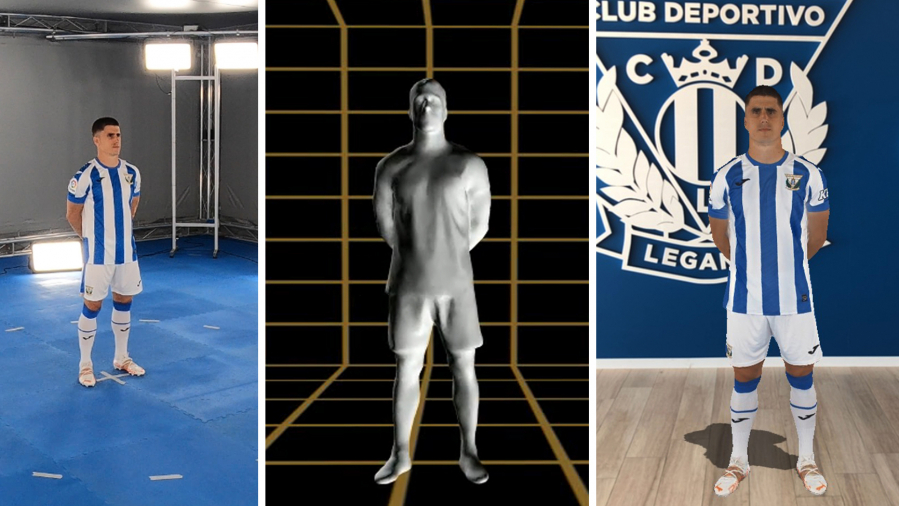 Football clubs are becoming ever more creative when launching their new kits for the upcoming season, and CD Leganés have taken this process to the next level by using 3D technology to ensure fans can inspect every inch of their 2021/22 shirt, shorts and socks.

Working with mixONreality, a Madrid-based specialist in volumetric video, CD Leganés were able to put together a unique experience for their supporters.

First-team players Unai Bustinza and Javier Avilés modelled the new kit in a pioneering way, posing in the mixONreality studio to capture video from all angles. This 3D footage was then made available for fans of the Pepineros, who could drag and spin the players around on their mobile devices to see exactly how the new jersey looks.

“The objective of this campaign was to reach as many fans as possible and for them to discover the new home kit in an unprecedented way,” explained communications director Daniel Abanda and marketing director Víctor Marín. “We managed to become closer to our fans and to reach them in a more striking, dynamic and immersive way.”

The 3D videos have been viewed in countries as far away as Finland or Japan. Even though those fans are separated from Madrid by thousands of kilometres, they have been able to view the new shirt as if they were present in the club’s store at the Estadio Butarque. The club’s directors continued: “The technology allows fans to interact with the image of our captain Unai Bustinza in real time and the response has been extraordinary. The feedback we have received on social media and at our offices has been very positive.”

The quantifiable results have been positive too, with sales having more than doubled. Compared to the 2020/21 shirt, sales of the 2021/22 edition are up 109.68% over the first 15 days. It’s clear that this campaign has been a resounding success.

This isn’t the first time that CD Leganés have overseen a successful marketing strategy, though. The LaLiga SmartBank club have become famous for campaigns such as their humorous pre-match posters, their Super Pepino mascot, the workout videos shared by fitness coach Pol Llorente during lockdown and the fact that they once organised an expedition for player Rodri Tarín to visit Leganés’ namesake town in the Philippines.

As those working at the club explained: “In our communications and marketing department, we always try to be aware of new trends and innovative technology. We don’t always have the chance to implement them, but on this occasion, and thanks to mixONreality, we reached an agreement that meant we could adapt AR technology for one of our campaigns.”

Fans are glad that CD Leganés were able to organise this collaboration. A pioneering initiative such as this one brings a fanbase closer to something they really care about, the new season’s kit. Through modern technology, the process of researching and purchasing the new shirt has been taken to the next level.