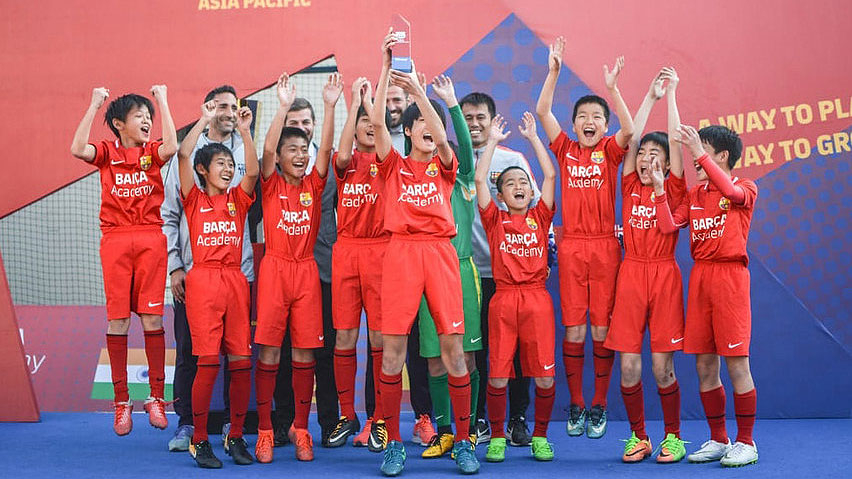 The FC Barcelona badge may already be recognised all around the world, but the Catalan club is not resting on its laurels and has been working hard to bring its style of play, philosophy and values to every continent. As part of achieving this goal, the Barça Academy project was born and there are now 49 schools for around 45,000 children between the ages of six and 19 in 23 different countries.

Those 49 schools are made up of 45 Barça Academy international sites, two Barça Academy PRO schools in New York and Haikou, one Barça Residency Academy in Arizona and the Barça Escola in Barcelona. Each one of these has a club-appointed local director who strives to educate the students in the same way and using a common methodology, both for sporting and for academic education.

In a footballing sense, the club wants to train footballers to play the same kind of attacking, creative and possession-based football that it has become known for. Yet it’s just as important for the Blaugrana that the youngsters learn the values of LaLiga such as respect, humility, effort and teamwork.

“At the start, with the six-year-old players, we work with a simple model so that the kids start learning our concepts, our style and our way of doing things,” stated Juanma Jiménez, Director of the Barça Escola Barcelona, a centre in the Catalan capital that has 32 teams made up of children between the ages of six and 12. “After that, the content of the courses is expanded and we drop in different systems of play.”

While every young player may dream of becoming the next Messi, there is an emphasis placed by Barcelona on preparing young footballers for life in general. “We are with the players as they follow their dreams of making it as a footballer, but we always stress the need to learn, to avoid frustration and to realise that this is the kind of journey that has to be followed step by step,” explained Carlos Martín, the Barça Academy Director.

Players who don’t end up staying at the club are even assisted when it comes to finding a new team that best suits their characteristics.

Supporting international growth efforts
The PRO academies allow FC Barcelona to deepen their roots in countries of strategic importance. As they are directly owned by the club, they are a key base for international collaboration and growth. The academy in New York - opened in 2017 - aims to train players up to 19 years of age in an area where 'soccer' is rapidly growing. The academy in Haikou responds to the strategy of the Chinese government to turn the Asian giant into a football superpower by 2050.

The club also has the Barca Residency Academy USA, in Arizona, where players combine studies, training and accommodation while competing in the top division of the US Soccer Development Academy.

As this expansion continues, there is an understanding that each country is different and that there are different footballing traditions around the world. As much as the coaching is based on the principles of La Masia, it won’t be exactly the same in the USA as it is in Nigeria, or in Japan compared to Guatemala or Australia compared to India.

“The objective is always to take the Barcelona experience around the world with the same sporting guidelines and respect for our values, but with the capacity for regional adaptation,” Martín added.

Nevertheless, The Barça Academy intends to expand the famous Barça DNA across five continents, training players to follow its methodology and, ultimately, to help them to compete in professional leagues.

To help bring its global teams together, the Barça Academy World Cup was recently held in Barcelona between all its academy sides. A total of 2,100 boys and girls between the ages of six and 14 took part in the tournament and over 650 matches were contested, with the winners coming from Nigeria, Spain, Japan and the USA.

There are also early signs of players making the jump to professional football, like the Japanese international defender Takehiro Tomiyasu who now plays with Belgian side Sint-Truiden.

With so many famous names that can be traced back to the Barça school, it is highly probable that a new generation of exciting prospects is on the way.