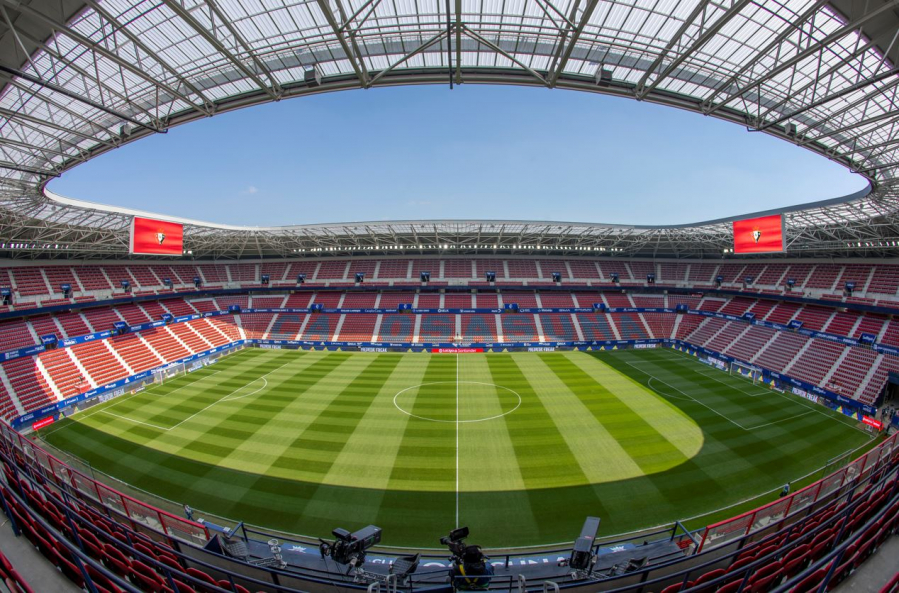 CA Osasuna’s El Sadar stadium was named as the ‘World Stadium of the Year 2021’ by Stadium Database, a leading publication covering stadiums and sporting infrastructure on an international level. The result of the popular vote highlighted the redevelopment work that has been carried out at CA Osasuna’s El Sadar by OFS Architects and construction company VDR. El Sadar received more than 40,000 votes from football fans who participated from all over the world, which saw the club come out on top with a significant margin over other candidates. The Estadio Único Madre de Ciudades in Santiago del Estero (Argentina) came in second, while the Estadio Banco Guayaquil in Quito (Ecuador) ranked third.

El Sadar has become the first LaLiga stadium to obtain this honour among first 10 editions of this award. CA Osasuna’s home ground was one of 23 sports venues nominated around the world, all of which completed their construction or refurbishment during 2021. The stadium in the city of Pamplona, in Spain’s northern Navarre region, was the only LaLiga representative.

The award is testament to the commitment of LaLiga clubs to improving their infrastructure, both technically and commercially. El Sadar is an example of an innovative stadium and has become a reference point for the competition.

For the first time ever, fans decided what the stadium should look like

Stadium Database announced in February that El Sadar was one of the candidates, offering a detailed description of the redevelopment work that took place. The website stated: “The former El Sadar, built in 1967, looked run down and did not meet LaLiga requirements. Therefore, in 2018, the club decided to undertake a major revamp combined with an extension. The structural elements of the old facility served as the basis for the creation of a modern and striking arena for more than 23,500 fans, the signature of which is the omnipresent red. The way the design was chosen was unique. For the first time ever, fans decided what the new stadium should look like.

“First of all, a new roof had to be built over all four stands. This increased the budget of the investment. But the architectural aspects were improved, as the facility now forms a consistent structure. The stadium is rectangular in shape with sharp edges and the roof resembles a giant red ring. On the other hand, the lower level of the south stand is equipped with 1,272 metal seats, which when folded take up little space and allow for comfortable cheering while standing.”

Highlighting the “extensive amenities for supporters”

Stadium Database praised other aspects of the redevelopment, highlighting the work done to make the matchday experience more comfortable for spectators and the steps taken to improve the facilities for employees and the media, as well as the way in which the club have worked to create new revenue streams: “As part of the work carried out, a new presidential suite and business boxes were created in the grandstand. On the first floor, offices for club staff, a conference room and media space were built. The VIP area can now accommodate 1,389 people, 450 more than before.”

A redevelopment that cost four times less than the competition

Of the nominated newly built and redeveloped stadiums in the running for the award, the El Sadar project was the cheapest, with the exception of some in Turkey and Argentina where construction costs are lower. The average investment for the projects on the list of nominees for ‘World Stadium of the Year 2021’ was €136 million, working out at €4,088 per seat. The redevelopment at El Sadar was completed at a cost of €23.3 million, working out at less than €1,000 per seat, four times less on average than the other stadiums nominated for this prestigious award.