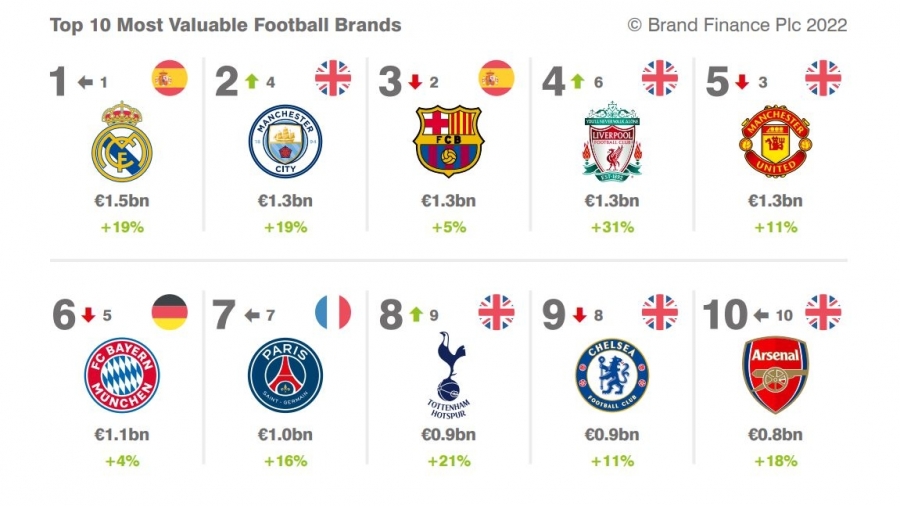 Eight LaLiga clubs make the Brand Finance Top 50, as the value of Spanish teams’ brands grows 18% in just one year

The 2022 Brand Finance Football 50 report has been released and shows that the brand values of Spanish football clubs are continuing to grow at an impressive rate. There are now eight LaLiga Santander clubs inside the brand valuation consultancy’s Top 50 ranking and they have collectively increased their brand values by 18% compared to 2021.

The Spanish clubs that made the Brand Finance Top 50 ranking in 2021 have been joined in 2022 by Real Betis, with the Andalusian club having improved its brand value by 33% over the past year.

The Verdiblancos’ rise into the Top 50 makes Spain’s top division one of just three leagues to have increased its representation compared to 2021. Only Spain’s LaLiga Santander, Italy’s Serie A and Brazil’s Série A have more teams present than this time last year. On the other hand, the English Premier League, Bundesliga and Russian Premier League all have fewer clubs present in the Top 50 compared to 2021. The Primeira Liga, Eredivisie, Scottish Premiership and France’s Ligue 1 have the same number of representatives as they did last year.

Real Madrid remain top overall with a brand value of €1,525m, while the other Spanish clubs in the Top 50 are FC Barcelona (3rd), Atlético de Madrid (12th), Sevilla FC (30th), Valencia CF (34th), Athletic Club (39th), Villarreal CF (40th) and Real Betis (43rd), with Brand Finance’s definition of brand value being understood as the net economic benefit that a brand owner would achieve by licensing the brand in the open market.

Real Betis’ 33% growth makes them the eighth-fastest-growing club in this sense, with the report stating that this is in large part down to “the owners’ care about the club, appreciating their fans and playing with an exciting and entertaining style”. Other Spanish clubs are growing rapidly too, with Atlético de Madrid achieving a 30% rise in their brand valuation and Villarreal CF 24%. This has produced the overall brand value growth total of 18% for LaLiga Santander.

A league that supports its clubs’ branding strategies

It is no surprise that LaLiga Santander clubs are enjoying so much growth in their global brand values, considering that LaLiga has worked closely with all the teams to support them in their internationalisation efforts.

This was a priority for Javier Tebas when he assumed the LaLiga presidency in 2013, at a time when the Brand Finance Top 50 had just five Spanish clubs and 16.26% of the overall brand value share. Now, there are eight LaLiga Santander teams in the Top 50 and Spanish football boasts 21.14% of the overall brand value share, which is second and only behind the total for UK clubs.

Discussing LaLiga’s efforts to support its clubs in brand building in an interview with Brand Finance, Tebas said: “For me, the important thing is to take the LaLiga brand and that of the 42 clubs that are part of it as far as possible. We are working to boost the brand value of the clubs, aware of the strength they have inside and outside Spain. In fact, it is one of the pillars of work within the Boost LaLiga project. We are supporting the different clubs and SADs to help them get more value out of their brands.”

Explaining how LaLiga does this, Tebas continued: “We try to highlight, especially on an international level, the virtues of our clubs. Especially when they play in European competitions and achieve milestones such as those achieved this season by Villarreal CF or Real Madrid. These are moments of great visibility in which all areas row to continue maximising these brands at a global level: with interviews with international media, events with partners in other territories, etc. We promote innovation and technology, training inside and outside the clubs, the world of entertainment. In short, we use tools to amplify the world of competition and football and provide it with much more content, to make it grow beyond the playing fields.”

These methods are clearly working, with reports such as the 2022 Brand Finance Football 50 demonstrating and quantifying just how much Spanish teams are promoting their brands. It is a matter of pride for Spanish football to have eight clubs present in the top 50 and for a Spanish club to be top overall.