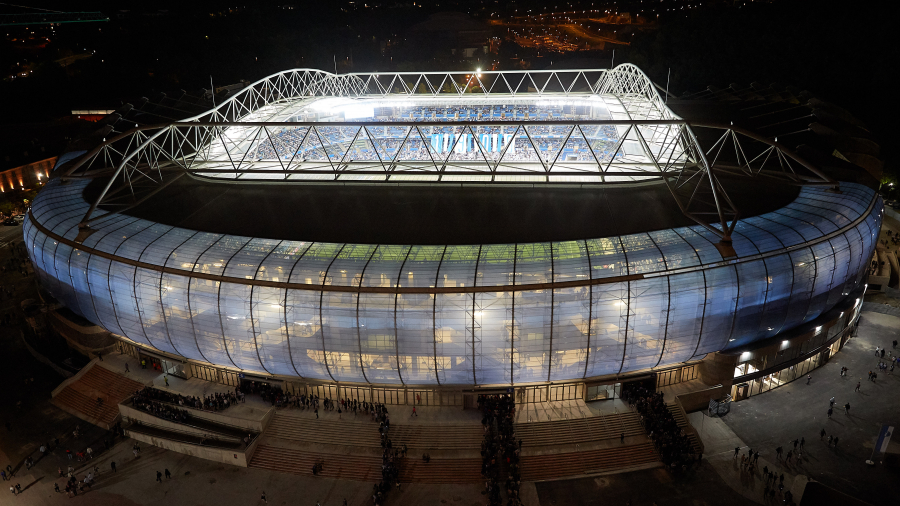 As any recent visitor to Real Sociedad can confirm, the Basque club is in great health. Fans of the 110-year-old club are enjoying a hugely successful start to the LaLiga Santander season that has seen La Real described as “Spain’s best team right now”, while the recent redevelopment of the Reale Arena stadium has already transformed the matchday experience for the thousands attending each home game.

Transformation is also occurring in the field of technology where the analysis of data is powering new projects from website redesigns to smart clothing. These advances, which are continuing to evolve, have placed the club as one of the true innovators in the game.

The innovation seen at Real Sociedad today is a result of projects begun long before, as Juan Iraola, the Director of Real Sociedad’s Digital Department, explained: “The project of transformation started in January of 2016 and has swept over the entire club by focusing on four areas: fan engagement; sporting excellence; the stadium and physical spaces; and business processes.”

Using technology to fill the stadium
Having just reopened its home stadium, the Reale Arena, one of Real Sociedad’s current priorities is to fill its new home. This objective, like many others, is being met through the use of data and technology.

“You need to attract people to the stadium and to do that the fan experience has to be unique, so we’re working on that as a club with many activities,” said Iraola.

Using a control panel provided by LaLiga’s business intelligence and analytics department, the club can monitor key figures and data, such as average attendance, which as of matchday 9 is 30,000. The club is currently conducting research to find the best digital solutions, but by monitoring patterns of behaviour over time, the club is able to send new offers and initiatives to maintain and increase this attendance.

“In our province, with 700,000 inhabitants, we’re attracting numbers that are very difficult to achieve,” added Iraola. “This is something everyone is happy with.”

WiFi is "a digital asset"
For Iraola, there must be a ‘why’ for everything the team carries out from a digital point of view, with return on investment a key concern. This was certainly true when deciding whether to roll out WiFi across the stadium, where it is already available in the boxes and is also used by companies outside of matchdays.

“We need to consider the WiFi network as a digital asset, like our website, e-commerce section or ticketing portal,” said Iraola. “A Real Sociedad fan who wants to communicate with the club only has to register once. With that username and password, they can access all the digital areas of the club.”

“We have opened the WiFi in certain areas to see if this makes it easier for us to communicate with the fans and will motivate them to register with a promotion,” Iraola continued. “We will also extend this to our stores, because they are an important part of our physical space.”

New innovations via mobile app
With this powerful new network in place, other innovative developments have taken shape, including the smart scarf and smart shirt that feature wearable technology, which boosts interaction between the fans and the club. A QR code on the shirt directs fans to a special page with offers, discounts and experiences, while the ‘One Club Man’ scarf connects with the club app, launched in 2018 and called Realzale.

From this app the club also manages the Realzale Programme, a loyalty initiative with almost 17,000 fans signed up, 13,210 of which are season ticket holders and have received various benefits from the club.

The club app also contains a digital members card, which allows fans to access the stadium through their phone, while it’s also possible to share a season ticket if a fan cannot make a certain match.

“Before, if you couldn’t go and wanted to give your season ticket to a friend then you had to meet them to hand it over, but now we’ve eliminated that process and made virtual sharing of the season ticket easy,” explained Iraola.

Data defines mobile strategy
All digital initiatives lead back to the club’s website, which as a result has been updated to support Real Sociedad’s digital transformation. Iraola’s team continues to use data to confirm fan preferences and act accordingly, which is why it has designed the website to be 'mobile-first'. “The first thing we had to do was adapt the website for the new generation of users,” Iraola noted. “Recent data shows that 70% of visits to the website in the past week have been through mobile.”

With deeper study of data, it is clear that different types of fans want different things and this is a challenge that Iraola and his team are working hard to solve. For example, the team has found that fans under the age of 20 rarely visit the website, but the traditional website still serves a purpose as other demographics use it as their main source of club information. It’s the same with social media, as Iraola explained that the youngest fans are more active on Instagram but that others are primarily on Facebook.

“We have to look after everyone,” Iraola said, “but we’re in a period of analysing things. Digital needs to be approached as a marathon and we will go little by little.”

As technology continues to develop and user behaviour evolves with it, the club intends to stay in step with these new demands so that it can ensure the most innovative and intuitive solutions.

Among the projects it has in mind, it plans continue with its Sports Thinker Smart Stadium programme, continuing to develop the experience inside and outside the stadium, carrying out pilot tests of 11 new technologies. Another of the projects to be developed is the creation of an experiential museum, which has prominence throughout the stadium.

Already, though, Real Sociedad has taken major steps forward in designing a project and experiences that will define the long-term direction of the club. “There’s a sense of doing things differently in order to move towards a future that nobody can truly anticipate,” Iraola said. “We question everything.”