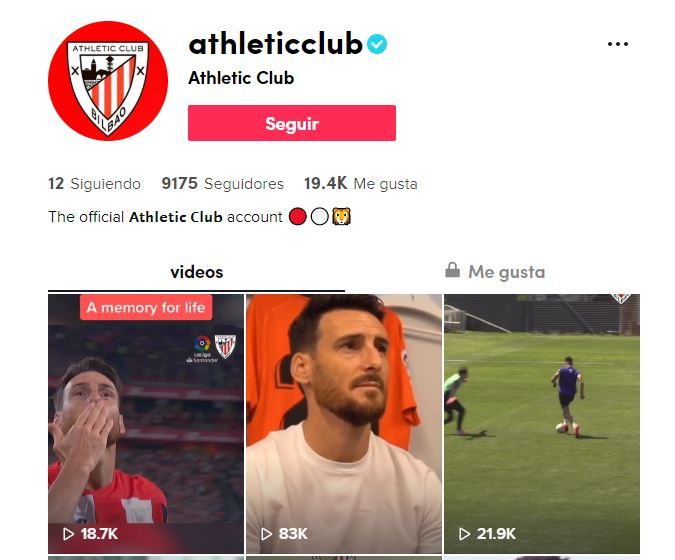 During the current pandemic, usage of social networks has surged, emphasising the need to place digital channels at the heart of any communications strategy. For football clubs, it reinforces the need to stay active on social media and stay close to their fans.

TikTok is currently the world’s fastest-growing social network with over 2 billion downloads. With a highly-engaged and young user-base, football clubs have a clear opportunity to reach new audiences by establishing a presence on the platform.

Athletic Club is the latest LaLiga club to make this move and in a short space of time, its efforts are being rewarded.

During this period of lockdown when competitions have been postponed, social networks such as TikTok have become even more important for building and maintaining relationships with fans. As the club continued: “We’ve made the most of this period of confinement, realising that this could be a good moment to reach out to the audience we’re looking for with content that is more casual than the content we put out on our other channels.”

This change in content style is reflective of Athletic Club’s ambition to reach a new profile of user that may not be accessible elsewhere. As the club explained: “We’re looking to find the younger supporters of Athletic Club who maybe aren’t on other social networks and we’re also keen for users who aren’t yet supporters to know more about the club. It’s possible on TikTok to reach a younger audience, the kind of users who are more difficult to reach through our other profiles.”

Record-breaking growth
The growth of TikTok globally has broken all kinds of records. Douyin, the sister app of TikTok, is the fastest growing social network in China, while in the rest of the world TikTok has reached over 500 million active monthly users. To Athletic Club, this proved that the platform’s format, short-form video, was one worth pursuing.

The move is already showing signs of success, with the club noting: “We had an average of 70,000 views for each post and almost 6,000 followers of our profile just 15 days after launching. For now, our plan is to keep learning about the platform and about how our followers interact with it. Little by little, we will be able to evolve towards different kinds of content. We think the format of TikTok will allow us to keep growing internationally.”

LaLiga’s official TikTok account has over 1.3 million followers and was one of the first football-related accounts set up on the site. To deepen its relationship with the platform, the league established a unique partnership by agreeing for Douyin to become ‘LaLiga Official Social Media Partner’ in China.

This makes LaLiga the first league in the world to sign such a deal with Douyin, which will help LaLiga and its clubs to take another step forward in their internationalisation strategies.