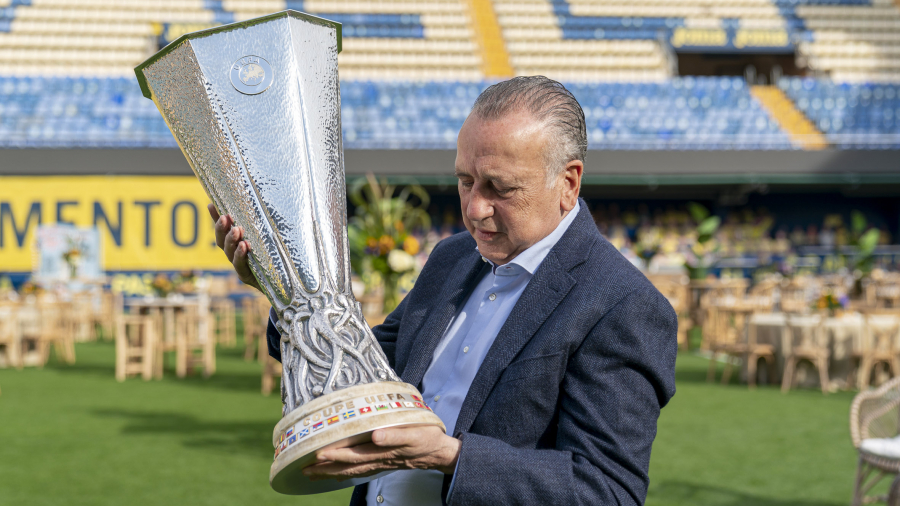 “To grow as a club, we must back the academy and invest in infrastructure, doing so with sustainability and economic balance”

Villarreal CF president Fernando Roig arrived at the club in 1997, ahead of the campaign in which the team would reach the top division of Spanish football for the first time ever. This season will mark 25 years since the club started its global growth, not only in a sporting sense but also in terms of its brand and recognition. Roig, in addition to the achievements he has overseen in the world of football, is te owner and president of Pamesa, a global líder in the design, manufacturing and marketing of ceramic products.

The institutional project at Villarreal CF is based on the following parameters: a culture of effort and ambition while remaining a close-knit family club; an organisational structure with clear and stable hierarchies; growth that is based on economic balance (not spending more than is brought in); a backing of the academy; solid foundations and investment in infrastructure; strong values and collaborations with local initiatives; and promotion of the ceramics industry, one of the drivers of the local economy.

Speaking about the club during a video call organised by LaLiga for international media, Roig discussed a number of issues and started by explaining: “We want to keep reinforcing Villarreal CF’s position in the world of football, which means staying for many more years in LaLiga Santander and continuing to appear in European competitions. Through LaLiga, which is the best league in the world, we want to keep growing the club with development that is based on sustainability and balance, with economic control.”

Thanks to Villarreal CF’s responsible and efficient management over the years, the club has now accumulated 22 seasons in LaLiga Santander and 17 participations in European competition. On May 26 of this year, the biggest sporting achievement so far arrived as the club won the Europa League. On that, Roig said: “With the triumph in the Europa League, we experienced a significant boost in our media profile. That success was based on economic control, on sustainability and on belief in the hard work of our academy.”

During his time as president, the director from the Valencian Community has overseen the construction of two high-performance sporting centres for the men’s and women’s first teams and for the development of the club’s promising talents. This significant backing of the academy is another of the identifying traits of Villarreal CF.

Roig stated: “Since we started the project at Villarreal CF, we have always maintained a plan of working hard on the academy and then signing from outside what we didn’t have here. The secret is that we do as we say. We do believe in the academy and we put that into action. Right now, there are more than 10 players in the first-team squad who have passed through our academy. We have invested in good youth football coaches to reach this point. We also built the two sporting centres, where we can give young players a lot of time and attention and we can also recruit talents to our academy.”

The Yellow Submarine are achieving some very positive results when it comes to their internationalisation strategy. The Villarreal CF brand is becoming more and more recognised around the world and Roig spoke about an example in Mexico with the club’s football school there. He said: “We’ve spread the spirit of what Villarreal CF and LaLiga are about and, ultimately, we have made ourselves known and helped young people to think about sport and football. The motivation behind our football school isn’t only to produce footballers, but to also develop people who make this turbulent world a better place. If we can also discover players to bring to Villarreal CF, then even better.”

Providing more details about the internationalisation at the club, the president explained just how important an emerging football market like India can be. He said: “This country has great potential and significant projects are being carried out there. This will be good for football in general and for India. All the investments in India and its football and sport will be beneficial for all, but especially for India. If investments are made in youth football schools then I’m sure some really great players will emerge.”

Asked about the keys to growth and what advise he’d give to smaller clubs around the world that wish to achieve the success of Villarreal CF, Roig replied: “It requires a lot of work. There’s a need for feeling to come before business and for work to go into the academy. It’s important to avoid the temptation to overdo things, as finding economic balance is important. Of course, there’s a need for good sporting installations with gyms, restaurants and good nutrition. Finally, it’s key to have good professionals and to have each of them focused on their specific role.”

Expanding on the comment about feeling having to come before business, Roig said: “I am the owner of my business, which is Pamesa, but in football there is a different feeling because I feel like the manager and not the owner, because the fans of Villarreal CF are the real owners. If I manage things well, then people will recognise this. A few years ago, we had a relegation to LaLiga SmartBank, but people believed in us because we see this project as a passion more than a business, since this is something we’re doing for our city and our region. I like to speak about football with emotion.”

Finally, Roig, who has overseen various improvements to the Estadio de la Cerámica during his tenure, spoke about the future for the facilities. He said: “You must invest in infrastructure. We are continually improving the stadium and we’ll keep doing so to have a great venue. We recently invested in a restaurant at the stadium called El Ceramista. The stadium needs to be an important part of the story of where our team plays and we should always have a good pitch, good sound system and good lighting, among other things.”