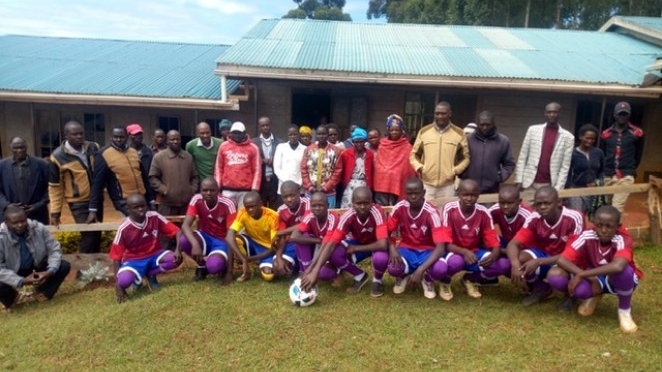 The story of CD Mirandés’ first overseas fan club, set up 6,000km away in Kenya

At the end of the 2011/12 season, CD Mirandés secured its first ever promotion to LaLiga SmartBank level, entering Spanish professional football for the first time. In the decade since then, the club has grown exponentially and the first team has spent eight of the past 10 seasons in the second tier of the Spanish footballing pyramid.

The directors at CD Mirandés have been working hard on the club’s internationalisation during this time, promoting the club’s brand and values, particularly those of healthy living, companionship and effort. This led to the club working with a football school in Kenya and the launch of its first fan club outside of Spain.

In February of 2020, Charles Ombui, a resident from Miranda de Ebro and a teacher in the Nandi Hills region in the west of Kenya, contacted the club to discuss the possibility of sending sporting material to the Boda Boda football school. CD Mirandés were delighted to help and sent various pieces of sporting equipment to help promote education through sport. They sent football shirts, shorts, socks, tracksuits, balls and more.

Although the start of the coronavirus pandemic made such a collaboration more difficult than anticipated, there was an immediate connection between the two institutions. As CD Mirandés explained: “Because of the pandemic, the shipment of material was delayed longer than expected, but during this time we came up with the idea of founding our first foreign fan club there, in addition to collaborating by sending this equipment.”

This is how CD Mirandés’ first overseas fan club was born, set up 6,000km away from its Estadio Municipal de Anduva. There are now more than 80 boys and girls playing football at the Boda Boda school in the club’s red and black colours, supporting the Jabatos from afar. John Kamanu, the secretary of the school, has even sent a note of appreciation to the CD Mirandés offices.

The LaLiga SmartBank club stated: “Within the club’s internationalisation program, it is a matter of pride for the club to share the passion for CD Mirandés beyond the borders of our city and even beyond the borders of Spain, as it the case here. Furthermore, the social and humanitarian background to the launch of this fan club in Kenya gives us even greater satisfaction, as we are collaborating in the education and integration of a disadvantaged section of society through sporting values that are important to CD Mirandés.”

For the club, this is a logical next step in the process of internationalisation. As well as growing the brand on social media, the club has had more and more foreign players in recent times and done a good job of promoting them, while they’ve even welcomed talents from abroad into the academy and accepted a special request from the Japanese football federation to allow coach Hirata Reiji to spend time at the club’s facilities.

The club said: “Recently, we have been placing special emphasis on the internationalisation of our brand. Since our move into professional football, we’ve seen that the sporting, social and economic interest in the club has grown exponentially and the entity is working on future plans that will make our club and our history better known. We are aware that it may be, in our case, a more medium-term or long-term process so we are not currently looking at any specific international markets. Rather, we try, where we can, to identify places where we can take the CD Mirandés brand to really consolidate it.”

Wherever relevant and appropriate opportunities come up, the club is now in a position to make the most of these. As they concluded: “CD Mirandés will always work with the aim of expanding our commercial agreements both locally and internationally within the geographical framework where, as is now the case in Kenya, we try to make the brand and sporting and social identity better known.”