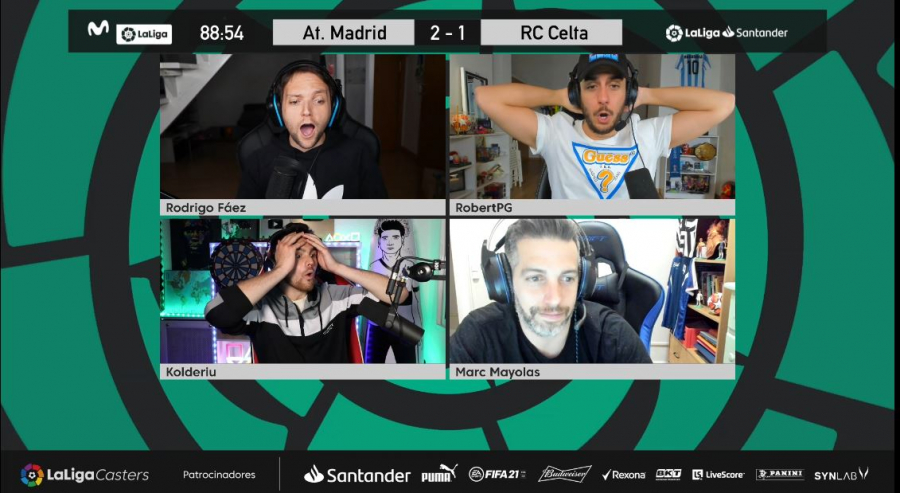 The role of streamers in LaLiga’s growth

After becoming the first European sports league to join Twitch, LaLiga has begun a collaboration with the global streaming service that stands apart in the sports industry. Through a new initiative called LaLiga Casters, Twitch’s community of creators, known as streamers, is bringing something unique to LaLiga’s broadcast and digital products.

During the second half of the 2020/21 LaLiga Santander season, LaLiga is working with some of Spain’s most important streamers such as Ibai Llanos, Ander Cortés and Ulises Prieto on a new project through which the streamers provide alternative commentary for one fixture each matchday.

Having reached over three million people after its first four matches, the idea has proved a compelling way for both LaLiga and Twitch to engage new audiences and increase viewership across multiple channels.

Reaching a younger audience
Many Spanish football fans of the future are active on Twitch, with 21% of the service’s users aged between 13 and 17 and a further 50% between 18 and 34. The challenge for LaLiga, or any other sports property, is to build meaningful engagement with these audiences.

“For many young people, their first interaction with a LaLiga team is likely to be through a video game or live streamed event,” explained LaLiga’s digital strategy director Alfredo Bermejo at the LeadersWeek.direct/AbuDhabi event this week. “Rights holders need to engage with those audiences and working with streamers is very important, due to their presence on services like Twitch.”

From Twitch’s point of view, the initiative creates new opportunities for members of its community. “What’s exciting about this kind of strategic partnership is working with a partner that clearly has huge expertise in the traditional area but that is looking to build a community on Twitch to provide the audiences we have with something authentic and relevant,” said Farhan Ahmed, strategic partnerships manager at Twitch. “LaLiga is working with some of our endemic talent to build those content experiences.”

Bermejo continued: “Building a community is what matters to us. Our main business is content creation and content distribution, but we want to go beyond the traditional content that LaLiga creates, beyond the 90 minutes of football matches. We want to engage audiences during the week and on the different platforms they use to consume sports related content.”

The long-term commercial opportunities
As LaLiga continues to grow its community and deepen engagement, there may be lucrative opportunities for partner brands to create new content that fits in a natural way.

“First of all, we want to be able to build those communities and create narratives that are attractive for those audiences,” Bermejo said. “Then, we believe that by getting brands into those narratives and trying to find the right branded content for those specific audiences, the bond between league, community and brand will be stronger.”

From the view of Twitch and the creators, this represents long-term potential to grow sporting content, something it took a major step towards in July of 2020 with the launch of a new sports category.

“Being able to work with one of the biggest, if not the biggest, leagues in the world is great for everyone,” Ahmed said. “It helps bridge that gap between sports and the content that we have on our service.”

How streaming aligns with traditional commentary
The LaLiga Casters streams are available globally on Twitch, where viewers can see the reaction of the commentators without the match footage itself. But in addition, this alternative commentary is available for those in Spain watching the televised broadcast of the match.

Alternate commentary channels have been a part of LaLiga broadcasts in Spain for several years, with some viewers preferring to listen to radio commentary along with the footage, but this is the first time that online streamers have been involved. For Bermejo, this combination of traditional broadcasting and online streaming is fresh and exciting.

“The idea is quite innovative,” Ahmed continued. “For some people in sports, if you’re not watching the live event then you might say ‘how is that going to generate audience interest?’ but it clearly is. It works if you activate in the right way and use the right personalities.”

LaLiga’s streaming experience with competitive gaming
LaLiga’s new partnership with Twitch continues an association that began in 2017, when the league began using the platform to broadcast its competitive gaming competition, eLaLiga Santander.

Ibai Llanos, one of the world’s most popular streamers, has been collaborating with LaLiga as an eSports commentator for years and is now a regular part of the LaLiga Casters initiative, providing commentary for the first match between Atlético de Madrid and Valencia CF. As relationships already existed, the transition into commentating on LaLiga Santander matches was a natural step.

For Twitch, this commitment to long-term partnerships drives value. “It’s exciting that LaLiga is looking to work with some of our creators on the service; something fundamental we look at is how we can continue to support and help grow the creators on our service,” Ahmed said. “It’s great when we work with companies and entities who look to service that.”

With the LaLiga Casters project having gotten off to a promising start, discussions are underway about continuing the idea into next season as well. “We hope that everyone wins,” Ahmed concluded. “The creator wins because they’re growing their community and have some exciting additional content to stream, LaLiga is reaching a new audience and it’s generating great excitement for our community on Twitch.”