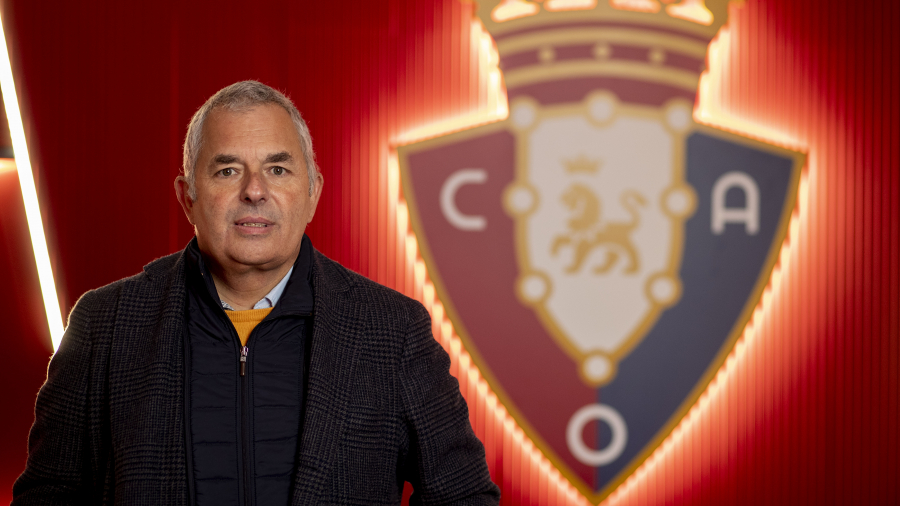 Fran Canal has held the role of general director of CA Osasuna since 2019. However his ties to the club date back further; he worked for the club in an external capacity prior to assuming his current role.

The Pamplona (Navarra)-based team have grown a great deal during Canal’s time at the helm, with the Osasuna brand garnering more and more recognition and appreciation. In this interview we find out the most pertinent aspects of CA Osasuna‘s development and evolution as well as its business model.

- What have been the main milestones Osasuna have achieved in terms of brand and business growth in recent years?

There are a great deal: we’ve managed to renovate the stadium which we’re all very proud of here at the club, as well as clearing longstanding debt with the Navarra tax authorities and consolidating a sports project in LaLiga Santander.

All this has boosted Osasuna’s brand value meaning that we are able to strike commercial agreements which were unthinkable five years ago and has allowed us to increase our sponsorship revenues fourfold. These results should serve as real encouragement to drive us on to achieve more in this regard.

- The club have totally renovated the stadium and are now in their third consecutive season in LaLiga Santander. What’s next for Osasuna?

There’s no doubt that our priority lies in keeping our place in the topflight; that’s our aim every season, to fight to stay among the Spanish elite. Osasuna maintaining its status of being a first division club goes hand in hand with its brand value increasing, meaning sponsors are keen to associate themselves with our name. Additionally, although our fanbase is incredibly loyal they want to see us competing with the best clubs in Spain. Our aim is to stay in the division for as long as possible and while doing so we will seek to improve our infrastructure and constantly improve our academy so that it yields good results and top players in the future.

- El Sadar’s renovation is set to be one of the cornerstones for the club’s growth. What are the club’s plans to get the most out the stadium?

It’s clear that a stadium’s use can’t be solely restricted to the 19 or 20 days a year when it hosts competitive football matches. A facility of this calibre needs to be multifunctional, offering leisure areas and making Osasuna season ticket holders and others alike feel that they are at home and able to enjoy being in a cutting-edge stadium. We are more than happy with the renovations but we can’t let up in our ambitious so that our stadium allows us to generate new sources of income, meaning this club continues to grow every day.

The new facilities don’t just host events of a certain size, but they are also able to hold other types of activities which means that the stadium - whose renovation costs have been a considerable financial outlay - is profitable for many more days of the year.

- CA Osasuna are renowned for the high stadium occupancy rates. What can that be attributed to?

There’s no doubt that the reason we have been able to break our all-time record of season ticket holders is because we have an extraordinarily loyal fan base that feels a strong affinity with the club. Every week we hang up the ‘Sold out’ sign outside the ticket office and there’s a waiting list for season tickets.

Our fans have shown that, despite the fact we’ve been around for over a century, the excitement of coming to El Sadar season upon season is still as big as ever.

- How is the club adapting to the new ways in which football is consumed to attract more fans?

First and foremost, Osasuna is a football club, not a public limited sports company or SAD, and we need to bear in mind that this is the most important thing about this club. As such we must strike a balance between sticking to traditional values while being at the forefront of fighting in a very demanding competition, both in terms of boosting our brand and holding on to the most talented players who come through our academy at Tajonar.

It should be our duty to not sell on our best academy products to competitors who are keen to take our best players.

- What are you doing at the club to boost the CA Osasuna brand nationally and internationally? What departments of the club chiefly focus on business?

Osasuna has struck deals with the with the Confederation of Entrepreneurs and Chamber of Commerce through the provincial government of Navarra in which it fronts the image of Navarran businesses both in Spain and overseas. Given that we have a lot of work to do in terms of getting the most out our internationalization aspirations we will be investing in and developing the Marketing and Communication departments to meet those growth needs.

- How is the club adapting to the evolving situation regarding sponsorships?

Ever since COVID-19 unfortunately appeared in our lives we have had to redefine our sponsorship strategy. There were some agreements which were on the cusp of being signed which came to nothing. Fortunately in recent years our sponsors have been growing and have become loyal to us, and they are very excited about these agreements.

While this terrible pandemic has adversely affected the global economy it has merely slowed down (not stopped) our growth. As such we can’t be too dissatisfied.

- Season after season the club is bridging the gap between itself and other clubs. What are the driving factors behind this? Does LaLiga’s growth as a competition play an important role?

The thrill which comes from having an evenly matched league is always going to make the competition grow. It is clear that the Premier League, arguably the role model for all other leagues, has the largest number of teams with a chance of winning. In recent years we have become a team which competes well against every team and we are capable of beating anyone. That is our goal: to know how far we can go while not losing perspective and going out onto the pitch wanting to win every game.

- The agreement reached between CVC and LaLiga is set to bring about great improvement to the competition and its clubs. How do Osasuna feel about this agreement?

Given that television rights are the largest source of income for all LaLiga’s teams, and that the growth potential of all of us both individually and collectively lies within these very rights - especially in the international market - it is clear that this agreement is a big opportunity.

The options it now offers us are great and we hope that we can achieve the milestones that we have set ourselves over the next four years. Our goal should be that LaLiga matches, if not surpasses, the Premier League as a competition.