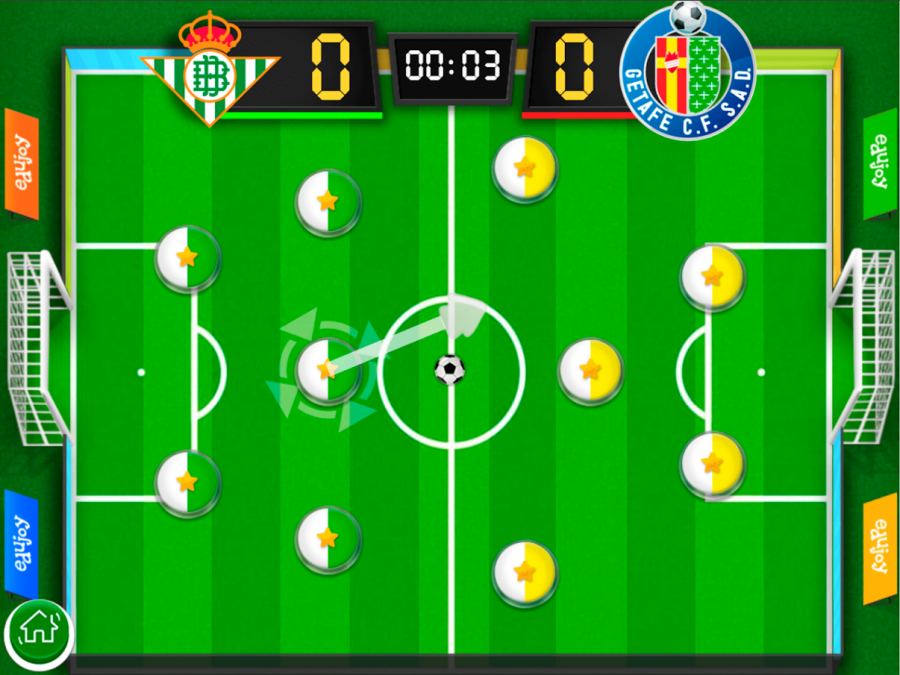 The apps keeping LaLiga fans engaged and entertained around the world

With the majority of global sports competitions temporarily paused due to the COVID-19 pandemic, fans are searching for other means of entertainment. This has led thousands of people around the world to discover the family of apps that are run by LaLiga.

More than simply providing information on fixtures, clubs and players, the competition has developed several gaming and educational apps over recent years that allow users of all ages to discover the competition in a new way. The initiative has led to more than 110 million downloads, 80 percent of which come from outside Spain.

"At LaLiga we decided to launch as many apps and especially games as necessary to maximise the audience we reach and the engagement we get with our fans," said Daniel Vicente, head of applications and games at LaLiga.

“We make different products available to fans, some with information about matches such as the Official App, others for fans more loyal to the competition such as LaLiga Fantasy Marca, for the little ones in the house, such as Educational Games or for the most casual fans around the world like Head Football LaLiga.”

Over 40 educative games
At a time when schools have been closed in many different countries, LaLiga’s approach has proven particularly relevant. The league’s Educational Games app is currently experiencing a surge in popularity as parents and carers look for new outlets to keep youngsters entertained in a productive manner.

Aimed at children between the ages of 4 and 11, the app, which was created alongside Edujoy, contains more than 40 games of varying difficulty, from maths puzzles to jigsaws to mazes to memory games.

There are nearly 3 million downloads already, with the highest percentage of users coming from Brazil. Iraq, Egypt, Morocco, Algeria and Mexico are among the other countries with the highest number of downloads.

The number of users is increasing week on week, showing that the games are serving a valuable purpose during a difficult time. “Apps like these illustrate our motto of ‘It’s not football. It’s LaLiga,’” Vicente said. “With this game we want the little ones of the house to enjoy practicing skills such as painting and colouring, puzzles or adding and subtracting. If we manage to leave these users with a good impression of our competition, with knowledge of the different teams and some of their players, we will have achieved our goal.”

Users from Argentina to Russia
The appeal of LaLiga’s apps and games is able to extend globally as content has been translated into more than 20 different languages, with particular interest from audiences in the Americas, Europe and North Africa. “For many people, their first interaction with LaLiga is through a mobile game rather than a live match,” Vicente added. “This first, often casual interaction allows us to show our value as a competition and potentially turn those players into viewers of live match broadcasts."

The Head Football LaLiga app is the most popular offering, with more than 60 million downloads and around 90% of these from outside of Spain. This game, in which animated versions of the players of LaLiga play one-on-one football, has been entertaining football fans around the globe during this period of shutdown, with over 5.5 million users in Brazil and Mexico and over 2 million in countries such as Egypt, Indonesia, France and the USA.

Other apps experiencing growing popularity are Tiny Striker, a game in which players attempt to score freekicks with their favourite LaLiga players, and Top Cards, the latest addition to LaLiga’s app family where users collect virtual cards to create a winning team.

Special app content for a time of quarantine
Over the past few weeks, LaLiga has been actively encouraging people to stay at home through its ‘LaLiga Se Juega En Casa’ (‘LaLiga Is Being Played At Home’) campaign and the league has been promoting these apps as part of this, even adding a special section to its main official app where match results, tables, fixtures and news are typically found.

There have also been new additions made to the content offered, with special promotions made available inside the apps during these days of staying indoors and with the ‘Stay at Home’ message repeated consistently.

“Our role is to provide entertainment for global audiences and this is particularly important during times like this global pandemic when there is no live football,” Vicente concluded. “LaLiga's apps, games and eSports projects are helping LaLiga maintain fans' interest and make their days a little more enjoyable. We will continue to create these experiences for fans wherever there is need for it.”