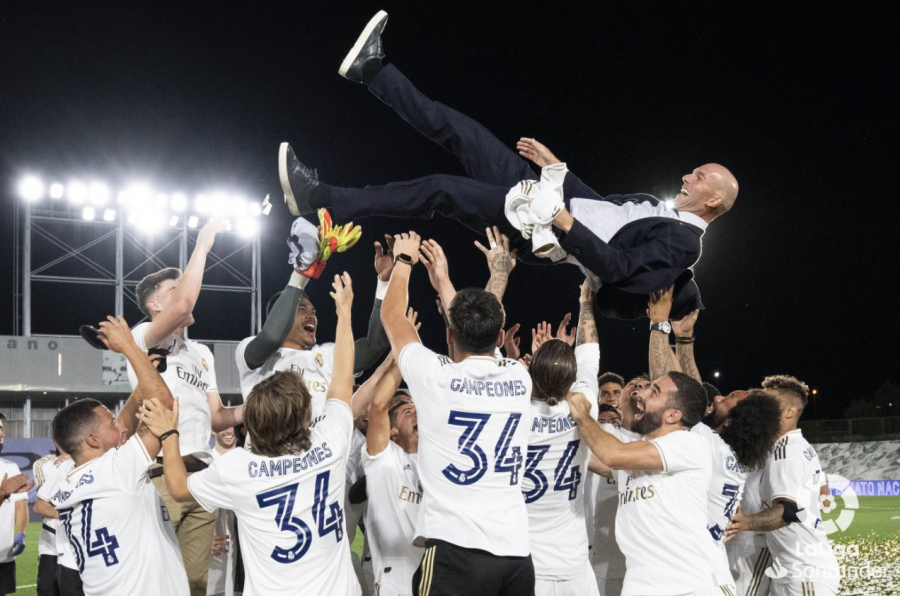 A defining feature of the 2019/20 season was the disruption caused by the COVID-19 pandemic, with global competitions suspended and many events and projects moving online. But this has not prevented LaLiga from continuing its global off-the-field growth in the form of technology development, commercial agreements and social initiatives.

The pause in competitions presented a unique challenge for all sports institutions, but even as stay at home measures were being observed, LaLiga began working towards the return of professional football in Spain.

In coordination with several European leagues and other industry stakeholders, LaLiga worked closely with the clubs, the High Sports Council and public health authorities on two ambitious protocols: a Return to Training Protocol and, subsequently, a Match Protocol.  Thanks to these initiatives, matches were able to resume on 11 June 2020.

Successfully completing the season was without question the standout achievement of 2019/20, particularly considering that football is an industry which generates 185,000 direct and indirect jobs, equates to 1.37% of Spanish GDP and contributes €4.1 billion in tax.  However, this only tells a small part of the story.

Below are the top 10 milestones that were achieved by LaLiga in recent months despite the global disruption to the sports industry.

1. LaLiga received R&D+i certificates for over 20 of its apps and platforms
LaLiga received a distinction in June 2020 for its commitment to innovation through the Spanish Innovation Certification Agency (ACIE) and European Quality Assurance (EQA).

'Calendar Selector', the tool designed by LaLiga to optimise TV audiences and stadium attendance through the use of artificial intelligence, was one of those selected, along with the applications created by the LaLiga piracy department to fight the illegal viewing of matches such as 'Marauder' and 'Lumière'. 'Tyche', the technology for monitoring possible match-fixing, was also recognised.

Furthermore, some twenty applications and tools created by LaLiga were certified as Technological Innovations, such as its OTT platform, the 'Mediacoach' and 'Horeca', tools developed by the BI & Analytics department and other corporate applications such as the Clubs Portal and the new LaLiga website.

Over 1.2 billion interactions have been achieved with LaLiga’s users in posts made this season. On TikTok, the largest online challenge in the platform's history was created to mark the launch of the 2019/20 competition, generating 61 million views and the participation of over 50 million users in 108 countries.

In Asia, Douyin became LaLiga's official social media partner, LaLiga Santander matches continued to be broadcast on Facebook in India and the Indian subcontinent thanks to a ground-breaking agreement and LaLiga opened a Line profile for Thailand and Indonesia – in addition to the Babe platform.

Also this season, the league began creating daily content in Hebrew this season.

3. LaLiga grew abroad and approached 2.8 billion viewers
LaLiga resumed the competition following the hiatus as a result of the COVID-19 pandemic with LaLiga Santander Matchday 28 and LaLiga SmartBank Matchday 20, registering a 50% increase on its international audience on that first matchday back through its 105 broadcasters in over 183 countries.

The total viewing figures reached almost 2.8 billion viewers accumulated over the course of the season, with notable international growth – LaLiga recorded an increase of 11.5% compared to the previous campaign.

In regional terms, the highest growth was recorded in Africa (33%) and Central and North America (20.4%).

4. LaLiga reached 32 agreements with foreign leagues and federations
During this season, LaLiga has reinforced its institutional relations with federations, leagues and governments from numerous countries, which is reflected in the form of various Memorandums of Understanding (MoUs) around the world. In total, 32 MoUs have been signed with the leagues and federations of more than 25 countries during the past five seasons.

Through these agreements, LaLiga shares and exchanges knowledge and experience and contributes to the local development of football. These collaborative spaces represent joint work in different spheres, from promoting grassroots football and fighting audiovisual piracy through to implementing BI and business analytics strategies and promoting initiatives to tackle racism and xenophobia. These agreements are the perfect breeding ground for future sporting projects which introduce football to environments where sport functions as a motivator and educator.

5. LaLiga reached €100 million in sponsorship
More and more prestigious brands are partnering with LaLiga, both in Spain and internationally and experiencing significant growth. As a brand, the competition has grown from having four sponsors in the 2013/14 season to 42 global partners in the present day, including Banco Santander as title sponsor for another season.

Thanks to the growth of LaLiga internationally, this season has seen the incorporation of brands of the pedigree of Puma, Budweiser, Livescore and BKT, while a 10-year agreement with EA Sports has been agreed.

These partners work with LaLiga on a global level. The income from these alliances has grown in recent years, reaching a total of €100 million in the 2019/20 season.

6. LaLiga shared its knowledge and experience through over 100 sporting projects around the world
Since 2015 LaLiga has had a network of sporting initiatives which promote and strengthen the value and image of Spanish football, sharing the knowledge it has generated over the years.

Over 300 projects have been carried out in 35 countries on five continents, providing coaching to over 100,000 boys and girls of all ages and nationalities. In the 2019/20 season, 108 sporting projects were launched, coaching over 16,000 players and training more the 3,000 coaches in 15 different countries.

Of particular note are 'Bravo! Reality', a scouting and talent-hunting programme carried out in Brazil; the socio-educational project at one of the largest refugee camps in the world, Za'atari in Jordan and the LaLiga Football Schools in India, which promote the integral education of young players and local coaches.

Due to measures adopted during the pandemic, LaLiga's sporting projects department adapted its educational programmes around the world by providing online alternatives. Notable among them is 'LaLiga at home', thanks to which more than 13 million users continued learning and enjoying football internationally.

7. LaLiga's apps surpassed 110 million downloads
The applications and games developed by LaLiga surpassed 110 million downloads in April 2020. These offer entertainment and live information during the matchday (the LaLiga Official App, LaLiga.com or LaLiga Fantasy Marca) and beyond the 90 minutes of play (Fantasy, HeadFootball LaLiga and the educational games). LaLiga's digital products – including its website, apps and games – reached over 40 million new users this season with 5.9 million active users per month.

In addition, this season the official LaLiga website underwent a complete design and technology overhaul, now being served from the '.com' domain. LaLiga Fantasy Marca also expanded its horizons together with partners and broadcasters LaLiga ONE (Israel) and ELEVEN SPORTS (Portugal, Belgium and Luxembourg), which launched versions of the game for their fans.

On the other hand, LaLiga's eSports competition, eLaLiga Santander, achieved the participation of 34 LaLiga Santander and LaLiga SmartBank clubs this season, with a total of 56 players representing them. With almost 20,000 players taking part, eLaLiga Santander broke the record for the number of registrations since it began three seasons ago, as well as reaching 10 million views on social media (Twitch, YouTube and Instagram).

8. LaLiga taught its values to over 10,000 schoolchildren
Despite the crisis caused by the COVID-19 pandemic, through its Foundation, LaLiga has continued to work on its social commitment, carrying out projects such as LaLiga Genuine Santander, the league for players with intellectual disabilities, in which 36 LaLiga Santander and LaLiga SmartBank clubs take part.

LaLiga Genuine Santander celebrated its third edition this season and remained active during the lockdown through different actions on social media. The social and sporting project at the Za'atari refugee camp in Jordan was also maintained. Furthermore, LaLiga has remained committed to teaching its values in schools through the Future Fan project, in which 32,000 pupils have now taken part.

This season, the project's fifth, over 10,000 schoolchildren learned the positive values of sport hand in hand with LaLiga, its Foundation and its clubs.

9. LaLiga continued with its commitment to fight audiovisual piracy
During the 2019/20 season, LaLiga's technological content protection department continued to innovate and work on creating new tools to detect illegal content. Its work is especially focused on detecting broadcast networks based on IPTV. In Spain alone, 641 IPTV websites were blocked in collaboration with the official national broadcaster.

Other notable achievements include a 22% increase in the number of YouTube videos taken down, totalling more than 900,000 over the course of the season, a figure complemented by the more than 375,000 videos removed from other social media platforms – 2% more than in the 2018/19 season.

LaLiga is a pioneer and leader in the fight against the fraudulent use of content and continues to collaborate with other major sports competitions. Dorna Sports, the company which organises the MotoGP World Championship, Belgium's Jupiler Pro League and INDECOPI, of Peru, have contracted LaLiga's antipiracy services. These services are also applied to the work with international broadcasters around the world.

The platform, created in 2018, is now available on mobile devices, smart TVs and via Chromecast and Apple TV, in addition to its web-based version. This LaLiga platform allows sports lovers to enjoy the National Futsal League, handball from the Liga ASOBAL and basketball from Liga LEB Oro, as well as international content such as the Superbike World Championship.

On the other hand, LaLigaSportsTV has reached agreements with both the Russian Premier League and the AFC Champions League to broadcast both competitions exclusively for users in Spain.