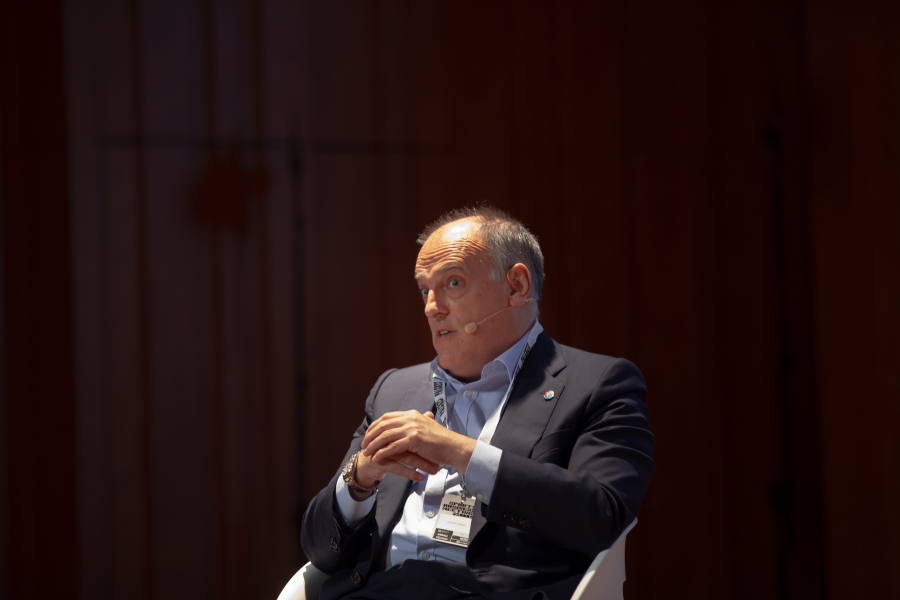 The future of watching sport: “What has happened with Netflix will happen here”

In just a few years, the world of entertainment has been transformed by online platforms. Driven by the likes of Netflix, over-the-top (OTT) services have made TV content accessible on demand, transportable and personal. For content providers, entering this new world is key to securing a new generation of fans. The sports industry is no exception.

Fans of Spanish sport now have the opportunity to discover and follow more than 20 competitions through LaLigaSportsTV, the OTT platform launched by LaLiga earlier this year. But this is just the beginning of an innovation process that the country’s sports leaders are making, using data and new technologies to create the best entertainment product possible.

At the 2019 Sports Business Meeting organised by Palco23, LaLiga President Javier Tebas joined the heads of basketball’s Liga ACB, handball’s Liga Asobal and and the national fútbol sala league (LNFS) to provide a glimpse of what the future holds.

Every matchday is an episode, every player a character
While distribution methods are changing, the first area of focus is the content itself. Significant investment is being made across federations to ensure that all material meets the highest standards of visual spectacle and storytelling, enough to rival the latest TV series.

“We want people to be as close to our competition as they are to their favourite HBO show,” said Tebas. “In our world, the players are the stars and we can bring their story to life through camerawork, sound and visual spectacle. It doesn´t matter what genre you are producing, the user expects the same level of quality.”

Antonio Martín, President of Liga ACB, added: “There is so much of a competition that you can share, whether it’s behind the scenes or getting up close and personal with the players. We need to make the most of the stars of the competition.”

Through managing sports content as if it were a drama, the panel stated, fans can build a stronger emotional connection that increases the chances of repeat viewing. “It’s about being unforgettable,” noted Martín.

LNFS President Javier Lozano added: “Technology like LaLiga’s OTT allows leagues to reach much greater audiences, but to make the product successful you have to rethink how you are telling your story and how you are connecting with fans. There is no limit to the ways you can do this.”

Bringing fans closer to the action
From a technology standpoint, the new frontier is to build a personal link between the fan at home and the action on the screen.

As Ricard Hijós, Vice President of Asobal, explained: “People want to interact with the competition, not just be a passive spectator. If you can find ways to make fans feel involved and communicate with them on a personal level, that is the magic formula.”

For Tebas, the key to achieving this is through data. “Big data allows for each user to have their preferred type of content at their fingertips,” he said. “From analysing an OTT platform like ours, you can get a clearer picture of which matches are being watched the most, by who, at what time and for how long, which informs how you communicate with individual users.”

Martín agreed that this two-way communication was an essential next step for the sports world to take. “We have to give fans the feeling of belonging,” he said. “The more we let the consumer participate, the more loyalty we will see, because they will be able to make the product their own.”

The Smart TV revolution
As more usable data is collected from users, the methods for using it will also evolve. Particularly, Tebas noted the increasing popularity of Smart TVs (where streaming platforms, social networks and smart technologies are being brought together) as a key part of the future of sport.

“If you look at a platform like Netflix, they see huge numbers of their users showing a preference for watching on Smart TVs,” he said. “What has happened with Netflix will happen here.”

The ability of Smart TVs to incorporate the latest technology will pave the way for rapid consumer behaviour change, predicted Tebas. “Look at voice technology and how popular that has become on mobile devices,” he noted. “Now imagine being able to choose your own match highlights on your Smart TV using voice search. You will have any type of sport content available to you without having to lift a finger.”

Tebas also highlighted the possibility for artificial intelligence (AI) assistants to deepen the personal connection to home viewers. “Through big data analysis we will be able to fully understand user preferences, and these can then be communicated via AI,” he continued. “When you arrive home, your Alexa device can remind you of when tonight’s match kicks off.”

Such possibilities are provoking leagues to think creatively about how they can broadcast their product to fans. “We are experimenting with cameras worn by players on their chest and the experience is phenomenal,” remarked Hijós. “We are confident that the consumer will adapt to new formats because ultimately they are loyal to a club or a league, not a platform.”

For Tebas, this continued experimentation will be crucial for sport to maintain its audience for the future. “We have to adapt to the demands of new generations and it’s clear that younger viewers expect more than traditional TV broadcast,” he concluded. “The new battleground for our industry will be across multiple screens.”