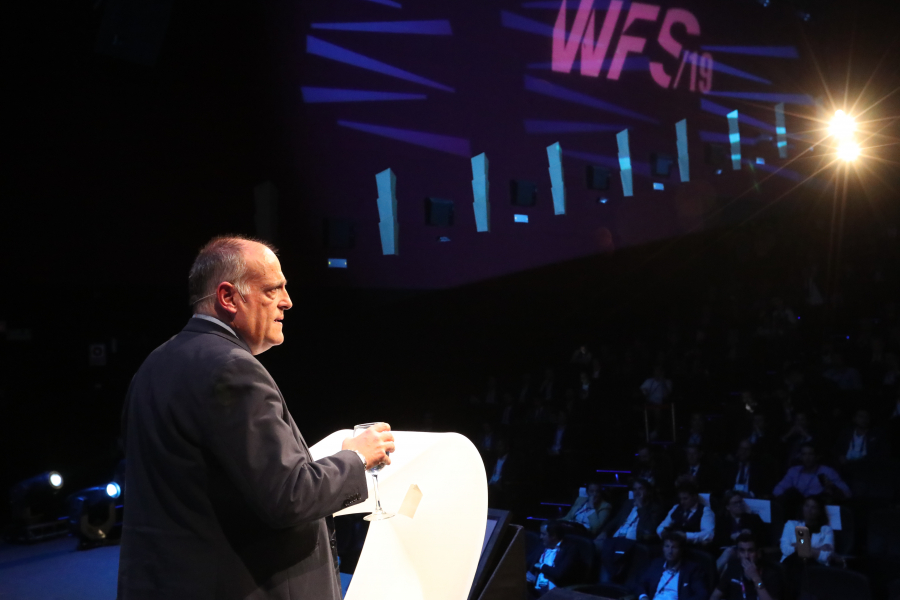 Tebas: Time for sports industry to improve its use of data

This approach explains the vision of the league today and also how it has evolved in the past six years. “Before, we had very few sponsors, all focused at the national level,” he said during a presentation at World Football Summit in Madrid. “But now we have global, national and regional sponsors, building on our ‘glocal’ strategy, with campaigns geolocated according to markets and regions.”

The key to this success, Tebas emphasised during his speech, lies in data. “It is often said that data is the gold of the future, the new oil,” he said. “But when you ask who is working with data, the companies that come up are telecoms, banks, insurance, Facebook or Google. The sports industry has not worked much with data in general.”

While some sectors of the sports industry may have neglected the importance and power of data over the years, this hasn’t been the case in Spanish football. “We have a timeline of four years working in the world of data,” Tebas noted.

During the presentation titled ‘LaLiga: The Pathway from Data to Artificial Intelligence in the Sports Industry’, Tebas outlined how business opportunities increase as the understanding of data improves. “We have to get used to the change in using data,” he said. “The data about our fans, the data about our users in the LaLiga Fantasy game and other games, the internal data about kick-off times, the data on stadium attendances, the data on our audience, the data focussed on economic control and more.”

Improving experiences for clubs and fans
LaLiga’s treatment of data and analytics took a major step forward in February of 2016 with a meeting with Microsoft. Later that year, in July of 2016, a memorandum of understanding was struck between LaLiga and Microsoft before a contract was signed in October.

Since then, some of the top professionals in this field have been working to lead LaLiga into the future and the organisation has adopted data in every department.

“There’s a need for data specialists in all departments of LaLiga,” Tebas explained. “These teams need to work in a uniform manner so that data can be collected, stored and processed properly. Our team of specialists segments the data, making it easier to analyse and optimise.”

The president also explained how LaLiga works with dashboards that allow teams to study in detail the most useful data for the business, be it financial, digital, brand presence, user behaviours or values of rights. “With these tools we have a unique picture of each country,” Tebas noted. The service is now also available to clubs, who can view and segment vital information about their audiences, by country, to help understand individual patterns of behaviour. “We can help clubs in their internationalisation strategies and show them their progress in each region,” Tebas added.

At LaLiga, this approach not only helps to get closer to fans and clubs but also to grow commercial opportunities. “Increasing knowledge about clubs and fans means we can improve experiences and grow the value of the competition, which also means the value of audiovisual rights,” said Tebas.

The advantage of Monday night football

Another example of LaLiga using such intelligence to optimise the running of Spanish football comes with the selection of kick-off times. On one hand, LaLiga uses data to define timeslots that make the most sense and it has become clear that having 10 different timeslots across a weekend is optimal. “The more your product can be watched, the more you can secure in the monetisation of audiovisual rights,” Tebas explained. The fact that there has been an increase in audiovisual income from €840m in the 2013/14 season to €2,1 billion this season proves that the approach is working.

“We have a strategy of diversifying the timeslots,” the LaLiga President added. “The key is ensuring we’re not overlapping matches. You can’t put one match on top of another one. All of this has led to the increase in international audiovisual rights because it has allowed us to offer more live football.”

Referring to Monday matches, Tebas explained that the data reveals how profitable having fixtures at this time would be were it not for the objections of the Spanish federation. “Right now we don’t have the Monday slot, but have still created 10 slots,” he said. “The time in Europe and Africa when there are the most people sat in front of their televisions is on a Monday night. At weekends, people tend to do leisure activities and go out, although there are some who stay in too.

But Monday night is when that number of people tuning in really goes up. It’s a shame that this isn’t understood.”
In line with this, LaLiga uses data to decide which matches go into which slots. This led to the creation of tools like Calendar Selector, which processes over 70 variables to schedule matches at the slots that will boost stadium attendance, provide the best environment for the players and maximise TV viewership for the teams involved.

Explaining the tool, Tebas said: “One month before the matchday, we put the scheduled matches through our Artificial Intelligence system, which decides what is the best time to optimise audiences, in bars, stadiums or internationally. The AI makes the calculation and delivers the optimal schedule, giving us TV audience predictions with a margin of error of 1% and stadium attendance figures with a margin of error of 3.4%.”

The accuracy of data on OTT platforms
Discussing the different ways in which football is consumed, Tebas spoke about over-the-top media services (OTT) and the fact that there is so much more audience information to be gleaned from this medium.

On OTT, Tebas said: “The business is not in streaming, but in the understanding of users. You have a lot more data on the users in the world of OTT, such as the numbers of minutes they’re watching, when they watch, at what time they watch, if they stop watching, if they interact through multiple screens, etc. This world is a lot more complicated, but also a lot more accurate.”

As Tebas stressed to the audience, these are just some of the examples of how data and AI can take Spanish football to the next level. The discipline will also lead to more data-driven marketing, programmatic advertising, financial responsibility and much more. “As we obtain more data, we will see better results,” Tebas added.

One example of data leading to further profitability for LaLiga and for its clubs that Tebas reflected on is that of sponsorship and the desire for relevant and specialised data. “There will be a radical change when it comes to sponsors,” Tebas stated. “They won’t only ask to be showcased, as that’ll become less and less significant. Being on the shirt, on the television and on the advertising boards will lose value and what will have much more value will be the delivery of organised, segmented and useful data.”

Having grown from an organisation of 57 employees in 2013/14 to having its own Business Intelligence and Analytics department, which now consists of 24 specialists, LaLiga is among the leaders of data usage in the sport world. But as Tebas emphasised, with so many possibilities still ahead, the competition is still in an initial phase.

“The world of sponsorship and broadcasting is changing, he concluded. “But I think we’re on the right track.”