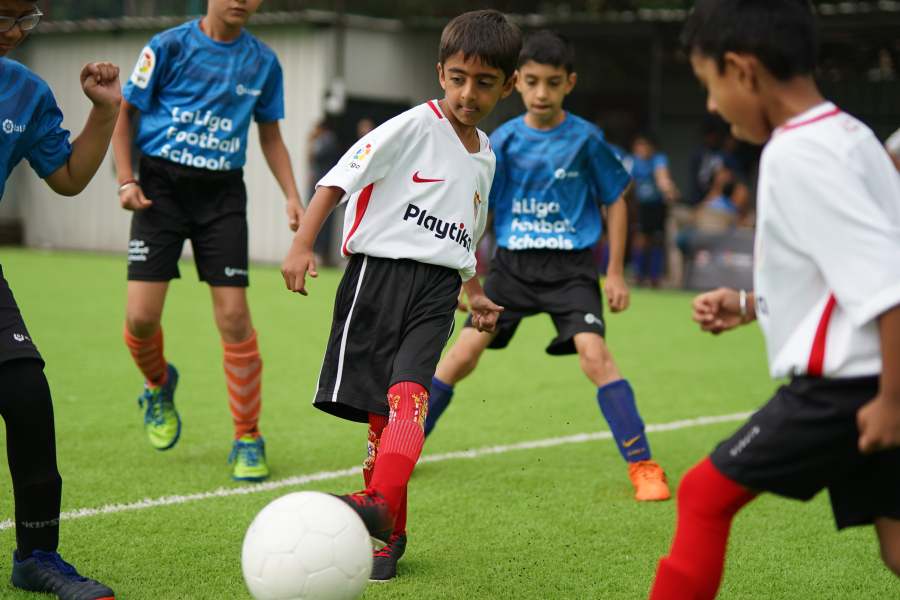 Having opened permanent offices in the country in 2016, LaLiga has been prioritising the development of football in India for some time. By providing opportunities that simply didn’t exist previously, the competition is reaching a new audience in one of the fastest-developing countries in the world and contributing to the global growth of football.

One of the most important initiatives of this project is LaLiga Football Schools, which since late 2018 has allowed over 12,000 students the chance to develop their skills in 40 centres across 14 different Indian cities.

Now, with the support of Spanish clubs both inside and outside of India, the initiative is establishing stronger bonds than ever before.
Real Betis, RC Celta and Sevilla FC have all announced plans to host LaLiga Schools programmes across India, providing local coach training as well as equipment for the players. Meanwhile in Madrid, CD Leganés is providing an opportunity for selected Indian players to test their skills in a LaLiga Santander environment.

In each case, the clubs are reaffirming Spanish football’s focus on India, with the hope of discovering new talent that can create new futures for youngsters across the country.

“We are committed to this market and to the young football aspirants here,” LaLiga India Managing Director José Antonio Cachaza said. “The latest project, in association with some of the best LaLiga clubs, will help provide an immersive experience to the students and ensure a lasting impact on the football environment here.”

Clubs hosting academies
By taking up residence in a wide variety of locations, the three clubs will reach as wide an audience as possible. Real Betis will be working in the southern city of Bengaluru, RC Celta further north in Noida and Sevilla FC towards the west in Pune.

As well as providing training for players and coaches, the clubs will provide kits for the students and take part in further merchandising giveaways in order to further strengthen the brand of the club in each location.

“We are pleased to join hands with LaLiga and to have the opportunity to work together in Bengaluru for its flagship programme in India,” Ramón Alarcón, Real Betis’ Chief Business Officer, stated. “India is one of the important markets for football and has the potential to become one of our key territories.”

This sentiment was echoed by Germán Arteta, director of RC Celta’s foundation. “It is a pleasure for Celta Vigo to work with LaLiga in a country like India with enormous potential,” Arteta said. “It is a fascinating challenge, building presence in a market with huge possibilities of growth, and fits perfectly into the international development plans of RC Celta.”

For Arteta, the chance to share the Galician club’s methodology and ideals in another country is particularly stimulating. “It is a matter of pride to be able to show how we understand football in our club and the importance of sports values, as well as our working methodology which is already a reference in Spain and in many countries around the world,” he added.

Meanwhile, Sevilla FC will aim to extend its reputation for international talent development at Pune’s Turf Up centre. The club’s President José Castro explained how this long-standing approach has helped both young players and the club to achieve growth.

“Sevilla is a club with enormous experience in education and talent development and we are confident in providing the young talent in Pune with the style, values and DNA that characterise us”, he said. “This approach has seen our team ranked amongst the top eight clubs in Europe, according to the UEFA rankings, and amongst the most important clubs in the world.”

For Castro, the chance to start working in a country with a population of over one billion and where football is growing rapidly is very intriguing. “India is a country where Sevilla would like to establish more roots and we are delighted to collaborate with LaLiga for this amazing grassroots project,” he said.

New scouting opportunities in Madrid
Nearly 9,500km away from these schools, CD Leganés is also helping LaLiga efforts to develop football in India. This month, a new LaLiga Football Schools Scholarship programme saw four Indian students visit the club to train with Los Pepineros, reflecting the rapid development that players have already been able to make in several months.

Rian Katoch and Asik Shaikh from Mumbai jouned Ishan Murali and Vidwath Shetty from Bangalore for a unique immersion with the LaLiga Santander club, focussing on both technical and non-technical aspects of the sport through sessions with club officials and some of Spain’s best youth players.

“These four students showcased exemplary technical skills and sporting values throughout their time at LaLiga Football Schools,” explained Cachaza. “We have always believed that India has strong potential to become a global footballing superpower and with this programme, young Indians will take their country one step closer to achieving this status.”

Launched in in association with the Spanish embassy in India and with India On Track, the scholarship was offered to these four players after a scouting process in which 32 players were shortlisted from LaLiga Football Schools. More than just football skills, the behaviour, attitude and sporting values exhibited by the player were also taken into consideration.

For José Ramón Barañano, Spain’s ambassador to India, the experience of these youngsters from Bengaluru to Madrid will create a legacy both on and off the pitch.

"We are delighted to support LaLiga in promoting football in India and investing in young and promising Indian players,” the ambassador said. “Spain understands the key role that sports and football play in its public diplomacy strategy for India, mainly because football is a capital tool in promoting fundamental personal and social values such as inclusion, camaraderie, tolerance, perseverance and teamwork. We are grateful to LaLiga for bringing these important values to Indian youth through Spanish football.”