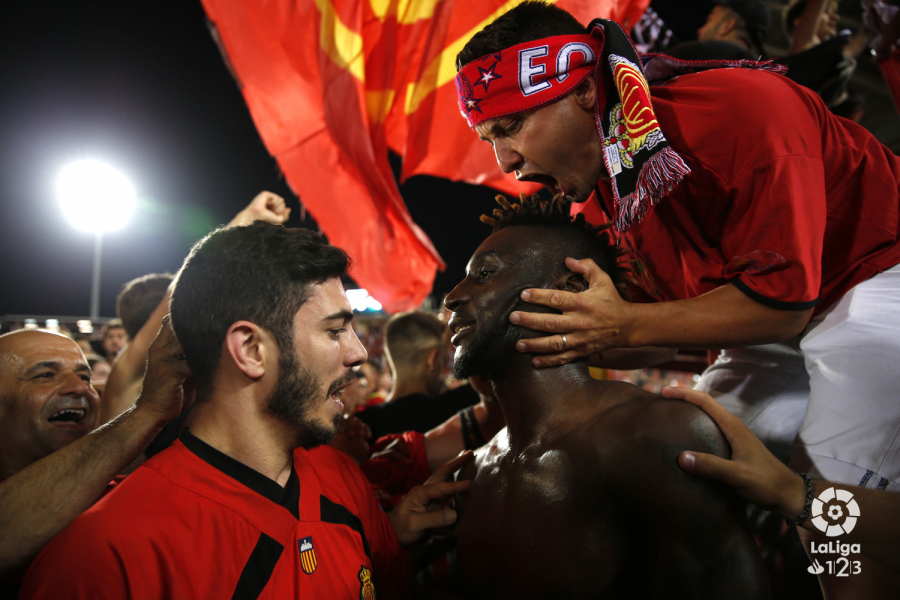 Spanish clubs have returned from their summer breaks and are preparing for the new season, with some of the teams heading into the new campaign with the special kind of excitement that comes with a recent promotion. The teams that have just moved up a division, whether from LaLiga 1l2l3 to LaLiga Santander or from the lower tiers to LaLiga 1l2l3, are determined to make the most of their new status and keep growing alongside LaLiga.

CA Osasuna, Granada CF and RCD Mallorca are the three clubs ascending to the top division, while CF Fuenlabrada, Real Racing Club, SD Ponferradina and CD Mirandés are now members of the second tier of Spanish football. Leaders of these seven clubs shared the keys for their success and how they plan to continue their growth on and off the pitch.

CA Osasuna: The cauldron of El Sadar
CA Osasuna arrive in LaLiga Santander as champions of LaLiga 1l2l3 and this feat had a lot to do with going undefeated at its home stadium, El Sadar. Recognising the central role that its stadium plays, the club recently announced major plans to revamp El Sadar, which focus on creating the most intense atmosphere possible.

These plans can now be accelerated following promotion to Spain’s top division.

“Our first objective before the start of the season was to recover the connection with El Sadar because we know that the great moments in CA Osasuna’s history have come alongside our fans,” said club President Luis Sabalza.

“After the promotion to LaLiga Santander, we have been able to make improvements to the reforms, including changing the seats throughout the stadium so that all fans, without exception, have an improved matchday experience," he continued.

With the works expected to conclude before the 2020/21 season, Sabalza is confident that the club’s enviable home record will help secure its top-flight status until that time.

“El Sadar has always been a stadium with an atmosphere that has had an impact on visiting teams and that will continue,” he said. “This is something LaLiga Santander is getting back next season.”

Granada CF: Values as the foundation of success
A major reason behind Granada CF’s promotion has been the focus on its values. “It’s humility, perseverance, fight and commitment,” explained Director General Antonio Fernández Monterrubio. “Our key strategic challenge was to encourage fans from the city and surrounding province to identify with the club. Communicating our values have helped us achieve credibility as a brand.”

The club’s many community activities have proven a particularly powerful way to increase links to locals who subsequently came to support the club at the Nuevo Los Cármenes stadium. “The way we explained our local identity through our content was vital in terms of getting people to engage,” Fernández added.

This approach is set to continue as the club fights to survive in the top tier of Spanish football in 2019/20. “The spirit of the team and of the family will remain,” Fernández stated. “Coexistence with our fans allows us to increase competitiveness.”

RCD Mallorca: Cultural change at management level
RCD Mallorca has returned to the top level of Spanish football after six years and has done so with back-to-back promotions from the Segunda B division. “It cannot be forgotten that the club is coming from being at the point of disappearing a few years ago,” said club CEO Maheta Molango. “The club is still a patient recovering from a very serious illness.”

One of the keys to this turnaround, according to Molango, has been the managerial transformation at the club. “Football is much more than what happens on the pitch,” he highlighted. “We’ve tried to bring some of the values and concepts of other industries with a lot of success, like the NBA for example, to football.”

One of the more visible examples of this is Corner VIP, a pitch-side seating experience inspired by the American basketball league. But Molango noted that the new attitude extends to all parts of the organisation.

“When you arrive at the office you notice a different business culture,” he said. “We believe in holistic management of the club from top to bottom.”

Real Racing Club: The value of fans
Supporters can play a significant role during a season and this has certainly been the case with Real Racing Club, a team based in Santander in the north of Spain. The club achieved a record of 11,000 season ticket holders in the Segunda B, the third tier of Spanish football, in 2018/19.

“Our fans have been the main reason for our success,” stressed Alfonso Pérez, the club’s President. “In the play-off against Atlético Baleares, many supporters travelled to Palma even though there weren’t enough tickets for them. They were confident about the promotion and wanted to celebrate the return to Liga 1l2l3 with the team and the club.”

Having been one of the 10 founding members of the first division when it was created back in 1929, Real Racing Club boasts a storied history and intends to amplify this now that it has returned to LaLiga. “We couldn’t spend more time outside of professional football,” Pérez added. “I think our club has been missed from the top level, as our history in Spanish football can generate affection around the country.”

Pérez is aware of the difficulty that comes with being a newcomer in a higher division, but nobody in Santander is giving up hope of achieving survival. “A successful season would be staying up without too much suffering and offering our fanbase some attractive fixtures at El Sardinero Stadium against teams of a good level,” the President said. “We’ve come up to stay.”

CF Fuenlabrada: The desire for growth
CF Fuenlabrada arrives in Liga 1l2l3 as champions of the Segunda B and will make its first ever venture into professional football in 2019/20. The club had been chasing promotion for several years and this year they finally managed it. “It is thanks to hard work, perseverance and humility from everyone at the club,” Jonathan Praena, the CF Fuenlabrada President, explained.

“Many clubs have a long history of competing in LaLiga Santander or LaLiga 1l2l3, but we want to leave our mark,” Praena said. “We’re a humble club, but at the same time we come up with a fresh and youthful air that will make people talk.”

Praena hopes that the performances of the team will make the municipality of Fuenlabrada in southern Madrid proud and highlighted the chance to create a new history by playing in historic stadiums such as Málaga’s La Rosaleda, Real Sporting de Gijón’s El Molinón and Deportivo La Coruña’s Riazor.

“We have a lot of room for growth and reaching LaLiga 1l2l3 opens up new possibilities that we have to exploit,” he said. I think it will be a time of expansion at all levels.”

SD Ponferradina: Pride and joy of El Bierzo
The achievements of SD Ponferradina are a matter of pride in an area of Castile and León that is going through a difficult period economically. “Despite the problems, we form part of a dynamic and brave organisation and these values also drive the club,” José Fernández Nieto, the President of SD Ponferradina, explained.

The links that the club has forged with its local area of El Bierzo has been vital to its promotion efforts. “Our followers have been with the team in difficult situations,” added Fernández. “They were spectacular during the promotion play-offs, supporting the team both at our El Toralín Stadium and on the road. We’ve fought for this together and we’ve achieved it together.”

Having suffered relegation three years ago, SD Ponferradina now aims to cement its status in professional football by continuing its local approach. “We bet on proximity with our players and our fans,” explained Fernández. “This is how ties are forged that are then reflected outside of the club. We are proud to represent the Bierzo and through this we will win the right to remain part of LaLiga.”

CD Mirandés: Strength through stability
After coming through three ties, CD Mirandés managed to confirm its return to Liga 1l2l3 at the end of the play-offs. Just two years after dropping into the third tier, the club from Burgos is back and puts this achievement down to not making any drastic changes during this time.

“The stability in all areas of the club has been important,” said club President Alfredo de Miguel. “Our humility and pride in our community can define the club and has helped maintain the link with our fans.”

Asked for his perspectives on the coming season, the President is prioritising the experience of the fanbase above all else. “We want a season where fans can enjoy good football and not suffer too much in order to remain in this division,” de Miguel revealed.

While the strategies of each club may be different, they will be united next season by LaLiga’s commitment to financial responsibility. Each of these newly promoted sides were recently congratulated and welcomed into their new leagues at an event organised by LaLiga, where LaLiga President Javier Tebas highlighted the obligations of its financial controls.

“Financial Fair Play has helped us strengthen LaLiga thanks to the economic solvency of the clubs and I ask for these rules to be treated with the maximum respect,” Tebas said. “When it comes to the integrity of the competition, shortcuts are no good in terms of winning the competition or meeting sporting objectives.”

Tebas also urged the clubs to continue with the approaches that have carried them this far and to maintain the same values. By following these successful growth strategies, the newcomers of LaLiga Santander and LaLiga 1l2l3 will bring more than entertaining football to the competition next season.