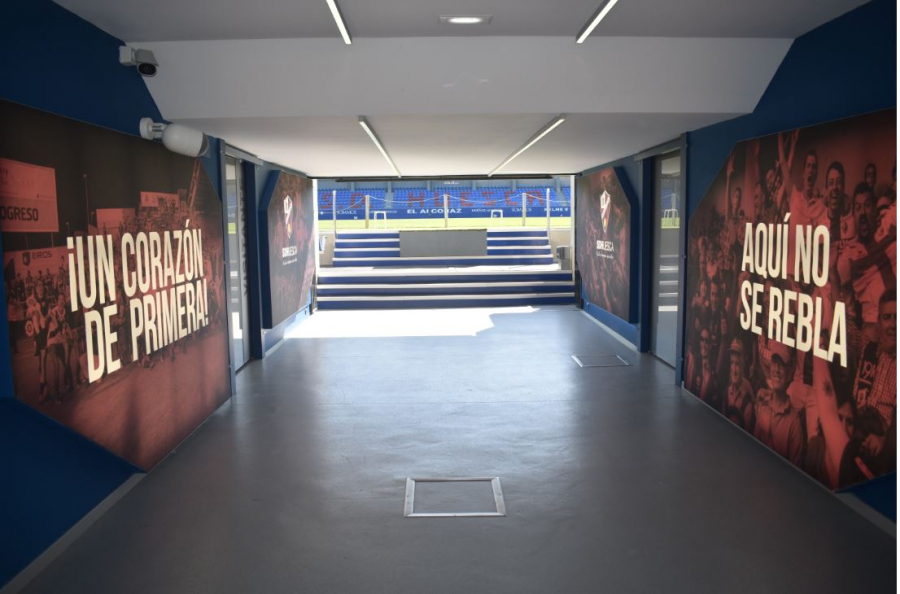 Europe’s leading companies are increasingly aware of the positive impact that digital transformation will have in the coming years and the effects of this can be seen across a wide range of Spanish football clubs.

In recent years, LaLiga has created a digitalisation culture that is being embraced by clubs across the competition. SD Huesca is one of the institutions to have begun various modernisation processes, putting the club in a position to be able to streamline its processes and grow globally via a series of new applications.

As SD Huesca manager Luis Sanclemente explained, technological advancement is one of the club’s main priorities: “We’ve had a digital transformation strategy that started in 2017 and it has various objectives,” he said. “As well as digitally transforming the business internally and making things easier for fans and commercial partners, we’re targeting a zero-paper policy and, as far as it’s possible, the automation of internal processes.”

Moving to a 100% digital model
To support its transformation process, the club is working with various apps, from in-house platforms to those developed by third parties and those made available to clubs by LaLiga.

Internally, the club has created a digital file tracker that can monitor all documents that pass through the club via a dashboard, while keeping track of all projects in progress using an open-source software. This same software has also been used for the structure of its online store, fan club app and its digital archive.

“We then use third-party apps for some core elements to do with our internal processes,” Sanclemente added. “We use SAGE that helps us in everything to do with accounting and invoicing, for example. We also use the classic social media apps as well as the Docuten supplier portal and e-signature platform.”

With this supplier portal, the club is working to receive all invoices electronically, whether in PDF format that can be processed through an OCR system, or in other electronic formats such as ‘Facturae’. This will allow it to sign all types of documents, both internal and external, digitally.

“We’re starting to incorporate the signatures of players and employees and we’re talking about having everything on the e-signature platform in the next four months,” added Sanclemente.

The club’s overall goal is to innovate and to reduce the use of paper and other processes to improve the club’s environmental footprint. Among the main objectives is the digitalisation of administrative processes.

“Six months ago, almost all invoices were paper, Sanclemente revealed. “However, we have already reached a point where 95% of invoices are sent to us electronically, which saves money in postage and storage. We have 250 signed documents that were previously paper, some of them long labour contracts that can be 50 pages long.”

This digital transformation process has already brought benefits to the club’s administration, HR, purchasing, partner contracts and commercial teams, while also helping with its commercial growth.

As Josan Oliva, manager of the club's digital department: “We’re working more and more with suppliers and partners who offer technological solutions. We’ve found a commercialisation channel for assets that we wouldn’t have been able to access if we didn’t have the technological portfolio that we now have.”

The LaLiga digital ecosystem
The bespoke apps provided by LaLiga are categorised separately by the club as they form part of a wider offering that the league makes available. Currently, these apps are used to cover a broad range of customer communications and engagement.

“We’re working within the agreement that LaLiga has with Salesforce for everything related to digital marketing,” Oliva explained. “We’re also part of LaLiga’s corporate websites project to develop our club website as well as our official club app. We’re integrating into the whole digital ecosystem that is offered by LaLiga.”

In addition, the club is making good use of the various data dashboards that are offered by LaLiga through the online club portal. “These help with internal management and data analysis, regarding topics such as television audiences or average attendances inside the stadium,” Sanclemente noted. “All of this is very useful.”

The benefits for fans
As part of its collaboration with LaLiga, SD Huesca is working on ways to use technology to directly impact the fan experience. “We were one of the first clubs to enter the data-driven programme from LaLiga, which has an objective is to integrate all the processes related to fans, season tickets, matchday tickets and marketing into digital platforms,” Oliva said.

Among the benefits, SD Huesca is anticipating a more fluid experience for fans once they return to the El Alcoraz stadium. “Last year, we requested an upgrade for the turnstiles so that fans could enter with NFC technology, as well as their mobile phone or their season ticket card,” Oliva said. “We want entry into the stadium to be even simpler.”

For matchdays, the club was already operating a virtually paper-free environment prior to the Covid-19 pandemic. With season ticket holders occupying the majority of the seats, the only tickets sold on the day are done so digitally, via an exchange on the club’s digital platforms.

As Sanclemente said: “The tickets are bought through the online ticket section of the website and the process is automatic, as we no longer gave paper tickets. Instead we send the buyer a PDF with a QR code that can be used to enter the stadium.”

Annual increases in online season ticket renewals
Last season, when it came to offering compensation to season ticket holders because of the pandemic, SD Huesca offered their fans four options that included making donations, joining the new fan club or requesting refunds. All refund requests were managed online through the club’s members area of the website.

Innovation, reduction and greater reach
Such an adaptation requires both the technology and the willingness to make changes from inside the club. “In the spring we were the first club to join with LaLiga and use the Salesforce marketing cloud for newsletters,” Oliva said. "An important part of our relationship with the fans is the new SD Huesca Fan Club, where there will be a high degree of implementation of digital activities and content."

He continued: “With the interaction between the fan and the club, we’ve integrated systems that allow us to develop a series of digital assets that bring value to the fans as well as to commercial partners, centralising data and further developing the digital assets that we’ve started commercialising.”

Internally, everyone at the club is now seeing the advantages that this digital transformation can bring. Before the pandemic, the club had planned to move many activities online to accomplish its goals, but the circumstances of 2020 have allowed this initiative to accelerate.

“It is very important to keep bringing technology into football,” Sanclemente concluded. "We see that some public administrations in Spain have a high level of digitization in many of their processes and we believe this gives a good reference to football clubs when it comes to modernising their administration.”