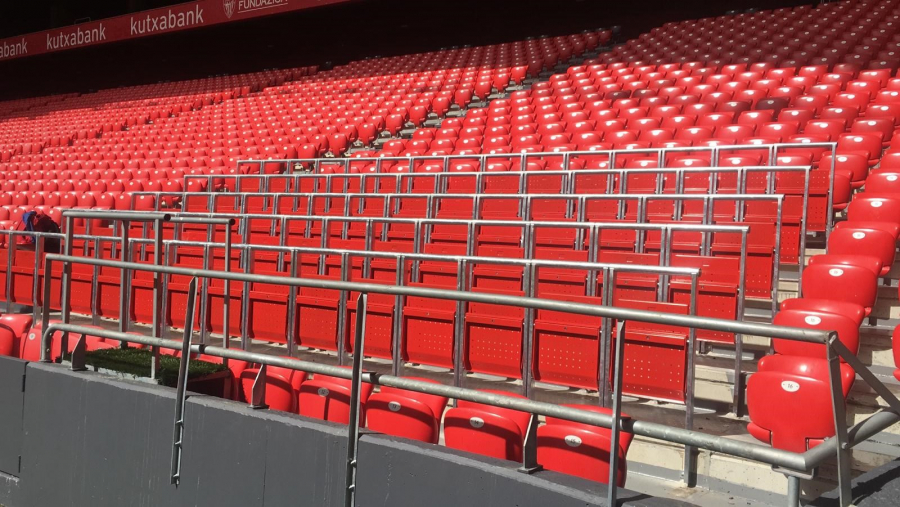 Athletic Club’s San Mamés is one of the newest stadiums in LaLiga but retains an intimidating atmosphere that reflects the club’s 120 years of history. This atmosphere is a key part of the fan experience and is set to be further enhanced by the introduction of a safe standing area, the first in the Spanish top flight.

The Bilbao club elected to install the pioneering ‘Rail Seat’ system, which has emerged as a popular new initiative for safe standing in football. Polls have shown that many fans prefer to stand during matches anyway, even in areas where there are seats in the way, so this idea served multiple needs at once.

In recent years the ‘Rail Seat’ mechanism has made the concept of safe standing at a football match possible. It consists of a line of metallic seats that can be pushed back to form a standing rail and to clear a continuous, strong, safe and obstacle-free lane along the row. This system also solves the issue of stadiums having to be all-seater for matches in European competition, as club staff can quickly and efficiently unlock the seats with a special key to turn the safe standing areas into all-seated ones.

The result is a space for the club’s most passionate fans to stand and to support the team in an animated fashion, while those who prefer to sit during the 90 minutes can do so in the other areas of the stadium and can do so without having to worry about their line of sight being blocked.

“This development will allow our liveliest supporters to remain standing, singing and jumping throughout the game, without risking their safety or that of those around them,” explained Borja González Bilbao, Athletic Club’s Director of stadium operations.
“San Mamés is a stadium with impressive qualities in terms of safety and accessibility and, in cases where the fans remain standing, it allows us to avoid surges when, for example, celebrating a goal.”

This pioneering initiative is giving Athletic Club supporters a unique experience, one that is becoming more common around Europe but that is still a novelty for most football fans. As well as increasing safety, the objective of such sections is to add to the fan experience and to boost the matchday spectacle. They improve social integration and significantly boost the atmosphere and the likelihood of fans to sing and chant.

This is just the latest advancement being made by Athletic Club and San Mamés, which was already one of Europe’s most impressive new stadiums. As well as being given ‘elite stadium’ status by FIFA and becoming a Euro 2020 host, it has been recognised around the world with a plethora of architectural awards and was named as the best sports building in the world at the 2015 World Architectural Festival.

Opened in 2013 adjacent to the old stadium of the same name, San Mamés is a celebrated example of modern stadium design and this is immediately obvious for fans approaching the venue as they see the 30,000-pixel screen and the 2,500 sail-shaped pieces of 12 LED lights each that decorate the exterior.

Inside, the vertical stands close to the pitch and the roof that is angled down towards the action combine to make the stadium as noisy and as intimidating as possible for visiting teams. The introduction of a safe standing section can whip up the excitement and passion of this cauldron further and make Athletic Club’s home even more of a fortress.