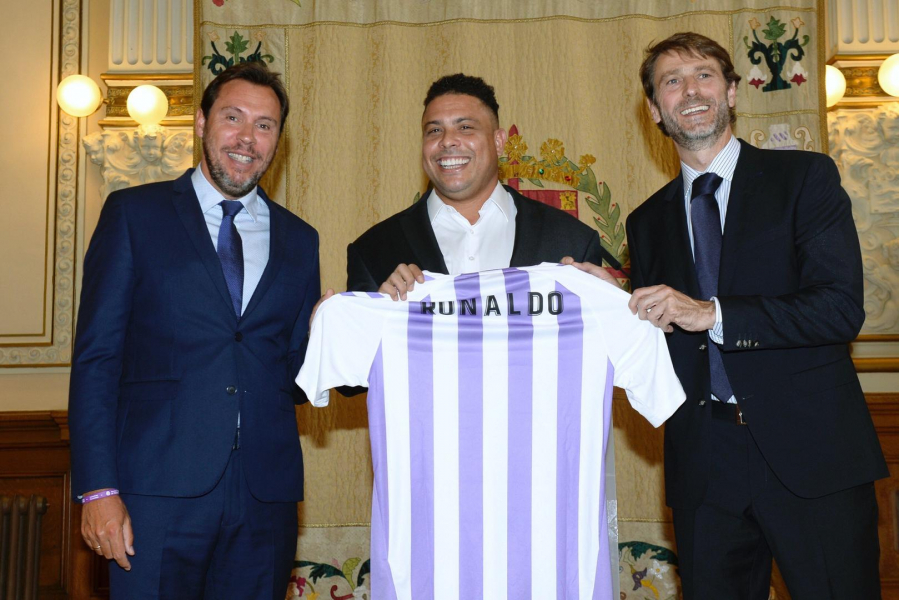 Ronaldo: “We want to convert Real Valladolid into a global club, with fans getting excited about us all over the world”

Ronaldo Luz Nazario has an almost unrivalled image in world football, but his career in the game is far from over. In this interview with LaLiga, ´O Fenonemo´discusses his plans to turn a LaLiga Santander club into the next global superpower.

You could have gotten involved in a number of projects, but you chose Real Valladolid. Why?

Real Valladolid is a historic club in Spanish football, one that has played in European competition and that is part of a city and region with a lot of sporting development in a number of disciplines, both at youth and elite level. It’s close to Madrid, something which provides us with lots of opportunities, and it´s is also an institution that has been well managed and has a lot of potential to grow.

Considering your impressive worldwide image, the good sporting results of the club, LaLiga’s foreign projects, is this the best time to internationalise the Real Valladolid brand? What plans do you have for this?

Internationalisation is necessary, not only for Real Valladolid but for any business. We work in a globalised world and can’t turn our backs on the opportunities that this presents. It’s true that globalisation has positive elements and some that are less positive, but we need to take advantage of the positive aspects and try to get better in other areas. We want to convert Real Valladolid into a global club, with fans getting excited about us all over the world. That doesn’t mean we’re not counting on those who have always supported us, as they are the foundation of our project in the end. As with languages, you don’t swap some fans for others. This is an issue of feeling, of belonging, which we want to transmit to all corners of the earth. We are studying the club, analysing the options, and we’ll make a public announcement of all of our immediate plans in the middle of January.

Many LaLiga clubs are getting involved in global markets such as the USA, India and Japan. Is there one market that particularly attracts you? Where could a historic club like Real Valladolid be accepted the most?

One of the things we’re working on is an analysis of the markets. This doesn’t sound very exciting, but there’s no other way to approach it. I want to insist that we have purchased the management of this club and not the emotion of it, because that side belongs to our fans. We’re going to grow with both, and I’m sure that we’ll come across some populations that’ll be more receptive than others. In any case, all of Asia, America, with the United States, and Brazil are very good places to start to internationalise our offering.

Your arrival has been very high-profile, with lots of media and others interested in it. Following your sports marketing training in London, what is the strategy of the club in the area of international communication and digital development, in order to grow outside of the Madrid region and outside of Spain? Is there a model club in LaLiga to focus on when it comes to growth?

We are of the opinion that there are many models, but that each of them can be adapted to what we need. We’ll speak about all of this in detail in a couple of months once we’ve had 120 days at the club, but we have already started with the creation of a Real Valladolid office in Madrid. We understand that working with a large section of our business department, away from the main offices in Valladolid, is a step forward in the management and usage of our resources.

Real Valladolid is one of the clubs that has given a strong backing to big data for sporting analysis. How is that work going? Do you have any other projects in mind related to digital transformation?

We are very proud of the work that has been developed so far with our big data model and we’re certainly not going to change its functionality. We do want to expand the possibilities that it offers and we will extend the sporting analysis to other aspects that can help us better understand our fans, for example by working out their matchday habits in order to be prepared for future demands. This can help us look for business groups who could partner with the club or that can expand the participation of our season ticket holders in the daily running of the institution.

With respect to the club’s facilities, do you have any projects planned for the near future?

It’s clear that neither the sports centre nor the stadium is particularly up to date. We have limits in terms of budget and ownership, but I am convinced that we can help Real Valladolid and the city to have top-class facilities and sporting equipment.

What are your priorities in the short, medium and long term?

It’s very important for the team to remain in LaLiga Santander. We are in good form just now, but this league is very long. Although we are ambitious and eager, we have to be aware that our objective is to avoid relegation. At the same time, one priority is to generate the necessary social and financial muscle in order to make sure bad results are a problem and not a tragedy. We’re trying to reach a point where a defeat can be seen as a normal part of competing, and where a bad patch doesn´t have negative impacts throughout the club. This is about stability. Another aspect we want to develop as soon as possible is the restructuring of the sports centre so that our young players have the best conditions and so that the first team can work in another environment.

The entire world of football knows the profile of Ronaldo the striker, but what about Ronaldo the club director? What similarities and differences are there with you as a footballer?

Just as when I was a player, I like things to be resolved quickly. That’s not to say that I act rashly. I have people I collaborate with who report everything that’s going on to me and who are responsible for their respective departments. We study the issues and take decisions, like when you find yourself in front of a goalkeeper in the penalty area. You always need time to do something and competence comes from knowing how to make the most of this time.

LaLiga has grown a lot since you ended your playing career. What changes have you noticed the most? Given your experience as a player and your training as a football director, what suggestions would you make in order for LaLiga to keep growing internationally and to keep being the best league in the world?

It is a global league now, with much more modern stadiums, pitches in great condition and a worldwide following. One aspect that LaLiga is working really well on is the advise given to clubs around internationalisation. It helps our competitiveness to work together in really large markets and to project the full product of our football to the fans who might not know about all of it.

In order for LaLiga to be better I think there’s a need to ask the opinion of fans, to explain to them the decisions that are being taken and to allow them to get involved in a more meaningful way, beyond simply sitting in front of the television or in their seat at the stadium. For there to be growth, it is necessary for all those involved in football to take part, and the fans are a central part of this.