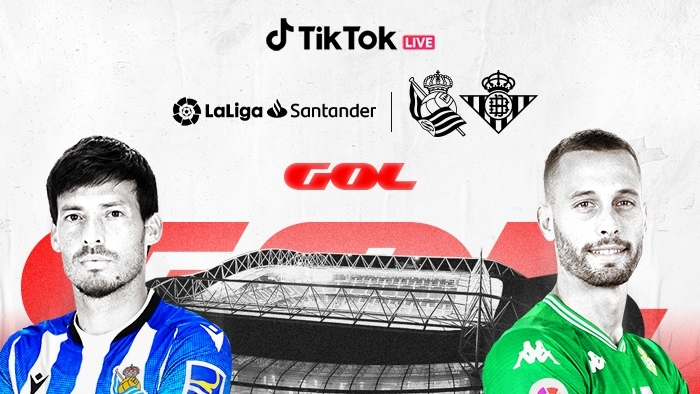 GOL provided the LaLiga Santander Matchday-32 game between Real Sociedad and Real Betis in vertical format for free in Spain via the sports channel's official TikTok account. This initiative was made possible by Mediapro, LaLiga and TikTok, making good on the commitment to innovation and adapting content to new digital consumption formats.

This saw Mediapro produce the first football match in Spain in vertical format and LaLiga Santander become the first major European league to serve up a game in this aspect ratio via the video platform. The match featured commentary from Nacho Hernaez and Carla Gabian, two of TikTok's leading football-related content creators.

Mediapro deployed a special team at San Sebastian's Reale Arena which included a Mobile 4K Unit and more than 30 professionals working exclusively on the production of the match in vertical format, a native experience for TikTok which included the adaptation of all of the graphics and the customisation of the broadcast designed for mobile devices and new audiences.

The figures produced by this momentous broadcast reinforce the idea that television and digital platforms can coexist as alternative and complementary experiences, having reached 506,000 unique viewers, 733,000 views, 68,000 chat comments, 7,000 shares and 1.2 million likes.

The TikTok broadcast started half an hour before kick-off, with the team warm-ups and pre-match coverage, providing the lowdown on the clash between two of LaLiga's vintage sides who are fighting for a European place. The fans had the opportunity to interact with Nacho Hernaez and Carla Gabian by taking part in the broadcast via the live chat, as well as enjoying one of LaLiga Santander's best games through a different experience thanks to the interactive functions offered by TikTok.

As is customary, the match between Real Sociedad and Real Betis was also available on GOL on free-to-air digital terrestrial television, as well as through different pay-TV broadcasters (Movistar, Vodafone, Orange and Telecable) with commentary from Jordi Dominguez, analysis from Alberto Edjogo, and all the details and reaction from the stars thanks to the work of Endika Martinez pitch-side.

Meanwhile, Alfredo Bermejo, LaLiga's director of digital strategy, stresses that "it consists of LaLiga going one step further in pursuit of building new audiences and bringing football to all viewers. This agreement with TikTok is confirmation of the work being undertaken by LaLiga and Mediapro in recent seasons to continue creating value and innovating in match broadcasts."

"We're extremely grateful that Mediapro and LaLiga have chosen TikTok to launch this ground-breaking initiative in Spain. TikTok is a place where football fans spend time and connect, and we're proud to be able to see how big sports brands are inspiring the community through innovation," remarked Soraya Castellanos, TikTok Spain's head of content, community and partnerships.

This trailblazing initiative is notable for the challenges it involved, as well as the commitment to understanding the content demands of new audiences and adapting to the new habits of an increasingly connected and interactive digital ecosystem.