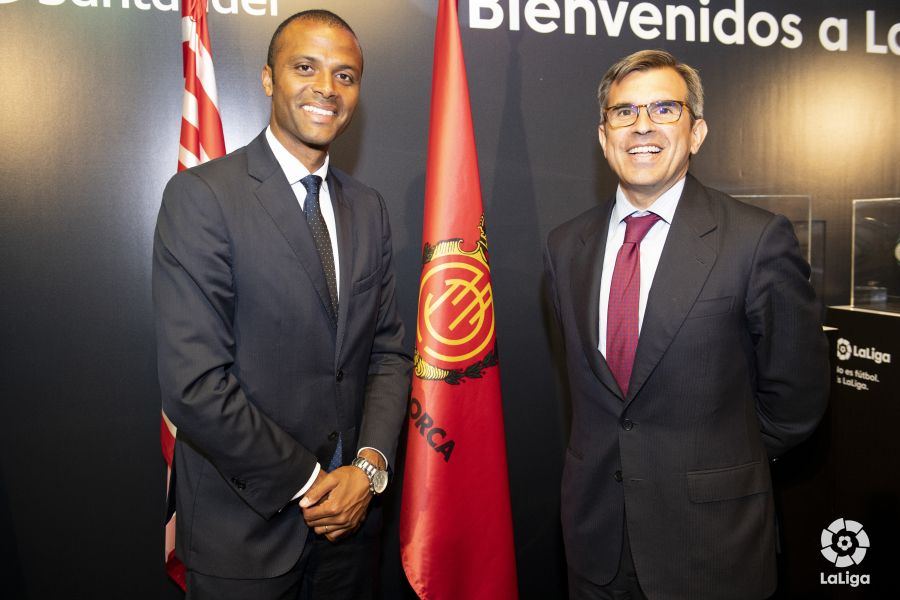 RCD Mallorca: How the LaLiga island club put itself back on the map

On October 22nd, 2017, RCD Mallorca was hosting Villarreal’s B team in the Segunda B, the third tier of Spanish football. On the same weekend two years later, on October 19th, it secured a 1-0 victory over Real Madrid in LaLiga Santander, with millions of fans from around the world tuning in to watch the match at the Son Moix stadium.

Back-to-back promotions have lifted RCD Mallorca back to a division it had not competed in since 2012/13. There has been a great deal of innovation at the ownership level to make this a possibility. An intelligent management model, headed by CEO Maheta Molango, has helped put the island club back on the footballing map.

In January of 2016, Andy Kohlberg and Robert Sarver, long-time owners of the Phoenix Suns NBA franchise, joined up with ex-Suns player and two-time NBA MVP Steve Nash to purchase RCD Mallorca and to instigate a long-term plan with Molango, a former professional player in England and ex-Atlético Madrid executive, at the helm.

It has been a rollercoaster ride for this ownership group, with relegation from LaLiga SmartBank to the Segunda B in 2016/17 followed by two promotions in a row. “We’ve either had a funeral or a wedding, with relegation and then two consecutive promotions,” is how Molango put it.

For the CEO, results on the pitch each weekend are key, but he is acutely aware of the need for the club to be run in a sustainable way in order to maximise any success that comes. “We must win games first and foremost, but at the same time we combine this with very strong and sustainable management in terms of how we run the club,” he said.

“No matter how good you are in strategy or marketing, if you don’t win games then you cannot have success. But how can you as a club be prepared for success on the pitch? I think if you are ready from a business perspective then you can grow much bigger than if you’re not. We’re seeing that right now.”

To achieve the goal of winning games, RCD Mallorca sporting director Javier Recio relies on the club’s academy and the team spirit instilled by coach Vicente Moreno, who took over the dugout in 2017. “We believe that individually there will be better players than ours, but we believe that as a group of players we base our success on resilience, on strong character, on leadership and this is the key to our success,” added Molango. “I think the base of our success is the culture we created in our club, not only on the field but also off the field.”

18 months ago we @RCD_Mallorca were in the 3rd division. today, we beat 1 of the biggest clubs @realmadriden in the World in front of our incredible fans. A long season ahead, but these moments are to be celebrated. a testament to the players, staff & fans for all the hardwork! pic.twitter.com/P1pVubkgqZ

The sporting insight RCD Mallorca gets from former Premier League players Graeme Le Saux and Stuart Holden and former MLS star Kyle Martino has been important, while the link to the Phoenix Suns is also key in giving the club an edge. “The bridge between the best league in the world in terms of football, which is LaLiga, and the NBA, I think makes us a very special club,” Molango said of the Phoenix Suns connection.

RCD Mallorca has learned a lot about international growth and fan engagement from its NBA siblings and continues to find opportunities do so. Just prior to its clash with Real Madrid, the club hosted the inaugural Mallorca Global Summit at Son Moix, welcoming attendees from the NBA, Phoenix Suns, La Liga and PayPal among others, discussing topics from global marketing in business to building strong relationships between clubs and leagues.

The club has also realised the potential of the island’s booming tourist industry, finding ways to attract foreign football fans as well as looking after the local fanbase.

Examples include the creation of fanzones before matches with music and entertainment outside the stadium, as well as the VIP Corner initiative inside the ground. In the same way as the most exclusive seats at an NBA game are courtside, RCD Mallorca supporters in this section can watch the game from a VIP area that is the closest section to the pitch, rather than high up in the main stand like most traditional hospitality zones.

“We try to be ahead of the curve, we want to be innovative,” Molango said of the club’s approach to getting the most out of the stadium. “We understand that the stadium doesn’t have to just be a place to watch football every two weeks, but it’s a place to hold events and conferences and those sorts of things. We believe that the experience of the stadium should be good and we have implemented some very creative things like the VIP Corner.”

There’s also an awareness of the benefits of growing collectively as a league, in the same way that all franchises in the NBA pull together in the same direction. As Molango explained: “Our view is that you’re only as strong as your league. One of the key things for us to continue growing and being sustainable is the unbelievable work that Javier Tebas and LaLiga has done.”

“We have gone from being a club that made a loss of €8m in 2016 to a club which will make, even if we go down, probably a profit of between €18m and €20m EBITDA. This would never have been the case had we not had a very strong league that has built an unbelievable product which is sold around the world. We’re very proud to be part of LaLiga, the best league in the world.”

Molango also commended the support provided by LaLiga to RCD Mallorca as it prepared for its return to the top of Spanish football and the logistical challenges that come with this. “For a club that goes from the third tier to LaLiga Santander, it’s crucial to have an organisation that knows what they want, which direction they’re going in and that is a very strong brand,” he said. “It’s very smooth and easy because it’s a very well-run organisation and it’s very clear what they expect from you. I think [being in LaLiga Santander] is helping us both financially and also logistically.”

There are further challenges ahead, of course. Molango has outlined that RCD Mallorca’s budget is the smallest in the division, but there is optimism that the tight-knit group of players and the smart summer acquisitions, such as the high-profile loan signing of Japanese 18-year-old Takefusa Kubo from Real Madrid, can keep RCD Mallorca competitive on the pitch, at the same time as the club grows internationally off it.