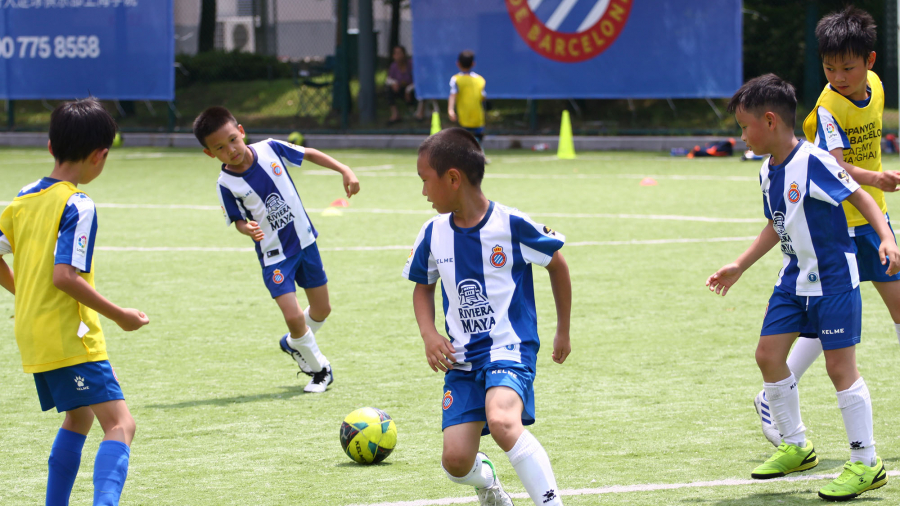 RCD Espanyol boast one of the best youth academy systems in Spanish football and the Catalan club have taken their expertise around the world by opening 11 international academies in eight different countries. China is a strategic market for the club with two football schools. The first opened in Shanghai in 2019 and the second in Guangzhou earlier in 2021.

The results in China have been spectacular, with the Shanghai academy growing annually by 30 percent and with this football school helping to inspire the launch of an official Pericos fan club in the country's biggest city. Little by little, RCD Espanyol have developed a reputation for excellence in China, helped by the fact that Chinese superstar Wu Lei plays for the LaLiga Santander club’s first team.

Now, thanks to an open day organised by the Shanghai academy for local media, the RCD Espanyol success story has been brought to many more people across China. Local publications Tencent Sports and The Paper were invited to the campus to see first hand how the RCD Espanyol methodology is taught and to interview some of those responsible for coaching the approximately 400 boys and girls enrolled at the school. The reports from these journalists had a huge impact, with 22 pieces shared about the academy and this open day, achieving 73 and a half million views.

Academy director Víctor Estavillo was one of the interviewees and he underlined how important the Shanghai school is for the club. Outlining the reasons for their success, he said: “I think the main difference is the proximity between the club and its academies. We at the academy have constant feedback with RCD Espanyol, who help us all the time with training sessions, coaching and any questions. Secondly, at all RCD Espanyol academies we train in the same way, which lets us be who we are. The third thing is it’s important at RCD Espanyol to follow the talent. If any player in the academy is talented enough, they’ll have the opportunity to go to Barcelona and be in one of the youth teams there.”

Nacho Entrena, one of the coaches at the RCD Espanyol Shanghai academy, also shared some interesting insight with the local media during their visit. He was asked what makes this football school different and explained: “We want the kids here to be able to understand the game. We try to give them the tools they need to be able to solve the problems that they’ll face in a game. We think that it’s also important to let the kids make mistakes to improve. What we care about is the process, not the result. It’s important to let the kids be themselves and to try to help them as much as we can.”

A discussion on the future of Chinese football

One of the reasons why the interviews were so captivating for Chinese readers was the fact that Estavillo and Entrena shared their expert opinion on the future of Chinese football. There is a big debate in China right now given the national team’s struggles to qualify for the 2022 World Cup, but Estavillo called for patience and painted an optimistic picture.

The academy director said: “[Chinese football] is improving with time, but there’s a need for patience. Football is something to work on long term. There’s a need for patience for the players to improve and the coaches to learn. I’m sure that, after some time, they will. The state of the national team and the professional league should not be confused with youth football. Just because the national team has a problem doesn’t mean you should change everything in youth football. Youth football is a long-term process. Don't pay too much attention to the results. Chinese football is gradually getting better.”

Discovering another talent like Wu Lei would help the Chinese national team advance on the world stage and Entrena explained how the current RCD Espanyol striker can be an inspiration for those coming through, as can the players in the Pericos’ first team who have graduated through the club’s academy system.

As the coach outlined: “Wu Lei is a big reference for all Chinese players. There are also some other players, like Óscar Melendo, who came through the youth academy at RCD Espanyol and reached the first team, so this must be an example too for our kids. It shows that if you train hard and fight for your dream then maybe you can achieve all you want. Maybe one day one of these kids that we are training will be in the first team of RCD Espanyol.”

With the success of the Shanghai academy and the opening of another in Guangzhou, RCD Espanyol clearly have big plans for China. Now, thanks to the media day held on site, many more people in China know about these ambitions.