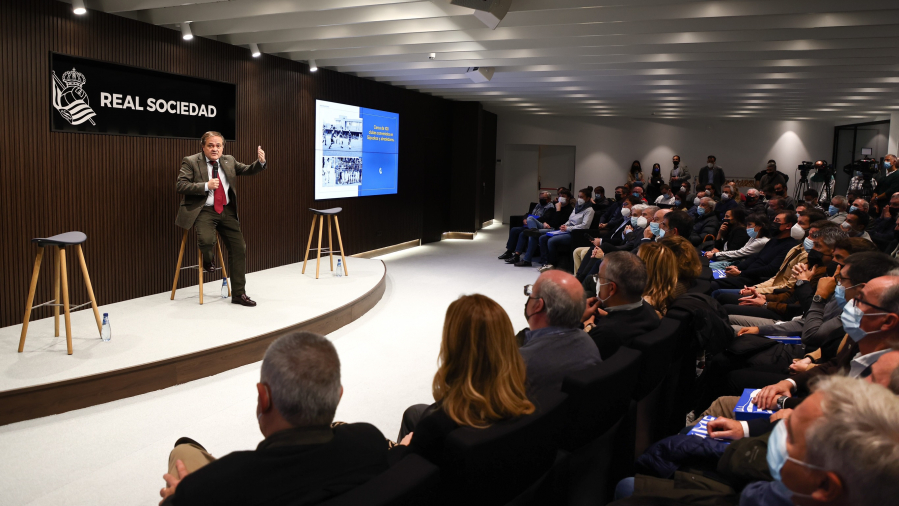 ‘Made in Gipuzkoa’, the Real Sociedad book that explains the secrets of the club’s academy

It’s no coincidence that Real Sociedad are in the top positions of LaLiga Santander and competing well in Europe at the same time. For those who know the club, it’s also no surprise that Real Sociedad’s B team are currently in LaLiga SmartBank, the only B team playing as high as Spain’s second division this season. There are many factors that explain the growth of the Basque club and the academy is one of these pillars, proving key to the institution’s evolution and development.

Zubieta is the training centre of the club and it continues to form great professional footballers. Over the first months of this current season, the academy has played a significant role in the success of the first team, with Julen Lobete, Beñat Turrientes, Jon Karrikaburu and others having debuted for Imanol Alguacil’s side.

The fact that La Real have backed their football school through a clear working methodology is increasing their potential. Now, this hallmark of the club’s philosophy has been explained in a book titled ‘Made in Gipuzkoa: Una forma de ser y de hacer’ – or, ‘Made in Gipuzkoa: A way of being and doing’ in the full English. It has been produced by the Txuri Urdin to show the rest of the world their way of doing things.

“We are how we play, we play how we are”

Many of those who work every day with the boys and girls of the academy have contributed to this book, with these employees passionate about effort, a shared vision, concrete objectives, conviction and purpose. Zubieta is more than just a physical place, as the word also refers to the concept behind all the work carried out on behalf of the youngsters, whether at local schools, with affiliated clubs or in Real Sociedad’s own youth sides.

This publication shares the strategic vision of a model that reflects the way of life in the region of Gipuzkoa in the Basque Country. The book outlines the values that make up this way of being and doing in Gipuzkoa, with these values guiding the entire training process the youngsters go through at the club. In explaining this, Real Sociedad coined the phrase “We are how we play, we play how we are”, using this to outline how the way of working is intrinsically linked with the Gipuzkoan identity.

A different way of working

Readers of ‘Made in Gipuzkoa’ will learn about the origins of this way of working. Although there has been talk of values beyond footballing ones since the club’s foundation in 1909, it was in 1952, with the launch of the first Juvenil youth team, that a singular vision for youth development was outlined on record.

The Zubieta model focuses on the people and not just the footballers. Those who work at the club explain that each boy or girl in the Real Sociedad youth teams cannot know for sure if they’ll become a footballer or if they’ll go on to work as an engineer, doctor, mechanic, lawyer or something else. Each youngster is unique and everything is centred around this idea.

The academy’s coaches accompany, care for and train the boys and girls throughout their journey, with stability the key platform of this model that is based on trust and patience. It’s about looking out for these youngsters and coaching and educating them. This is something that those in the local community appreciate and feel represented by, with Gipuzkoan families and society communicating this feedback to the club.

It is made clear in the book that this unique way of being and doing wouldn’t be possible without the support of the local community in Gipuzkoa, a region that is invested in sport. The province’s football academies and school teams are fundamental in this process and differentiate it from others.

In ‘Made in Gipuzkoa’, Real Sociedad share their complete training model, something that is becoming more and more popular in this field. Looking at the LaLiga Santander club’s example, readers discover how La Real work in a particular way on everything related to conditioning, the mind, health, injury prevention and sporting and academic performance.

The importance of understanding the play and the data

The academy directors want the young footballers to understand that the way of playing is fundamental and this is made clear when they arrive aged 12, the youngest age at which prospects are brought in to Zubieta. Data is also seen as essential because everything can be analysed to the finest details, thanks to interconnected data-collecting devices. This helps ensure the players’ development is the best it can be, just as it has to be after reaching the top level of professional sport.

For Real Sociedad, there is a certain way of training and playing. Their way of understanding the sport is based on a footballing decalogue that is discussed in this book. Looking back at the history of the academy, successful graduates who have achieved results on the international stage are referred to as well, but the book also looks forward by making clear that Zubieta will continue to be what Gipuzkoa wants it to be.