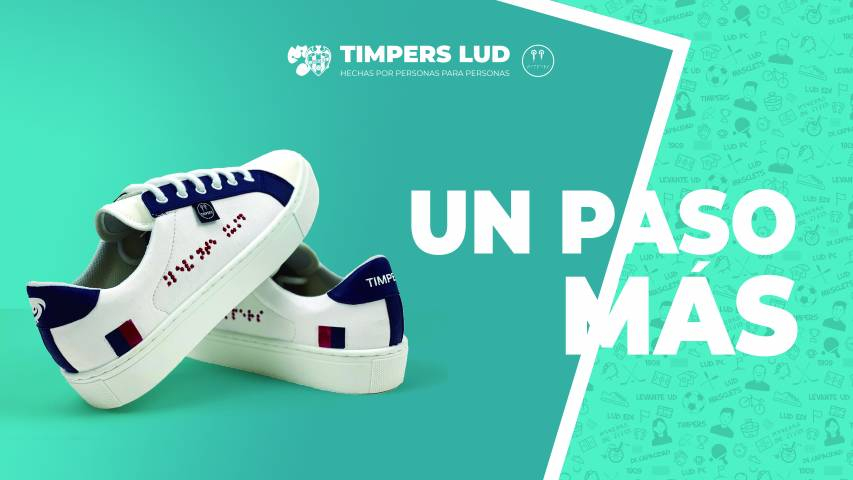 LaLiga Santander club Levante UD always aims to make its mark when it comes to social inclusion. Integration and equality are the underlying principles of a club that has worked to create opportunities for people of all backgrounds and increase its standing in society.

Levante UD’s latest project is to create a new line of trainers with a broader social relevance. It contacted the Valencian brand Timpers, whose employees include people with visual disabilities, with the idea of starting a pioneering initiative. "We got in contact with Timpers to find a common project that could provide visibility for the social work that is carried out by both entities," said Alberto Gil, Communication Director of Levante UD.

Footwear designed with braille
The result is a new line of Timpers LUD trainers, designed in collaboration with the club’s 'Cent Anys' foundation, to support people with disabilities. Within the design, the words ‘Timpers’ and ‘Levante UD’ appear in braille.

“Both the design, as well as the supervision of production and quality control was carried out by Timpers' team of people with disabilities, foundation staff and a selection of players from our foundation,” Gil explained.

Backed by a new promotional advert, the ‘solidarity sneakers’ have been created to break stereotypes about disabilities. Players from the Di_Capacidad project of the Levante UD foundation including David Casinos and Ricardo Ten take part, as well as Raúl Reig, Pilarema Ortí and Laura Leiva of Levante UD EDI, the club’s school for intellectual disability, along with Rafael Ibáñez of the club’s wheelchair hockey team, Levante UD Masclets.

Fast sales open new opportunities
While a limited edition of the trainers was originally created, new orders quickly had to be made. “In less than two weeks, practically 80% of the available stock was sold, Gil continued. “We are increasing stock but hundreds of pairs have already been sold. In addition, all players from our foundation’s teams have bought the trainers, representing another 200 pairs.”

To turn this short-term success into long-term benefits, all proceeds from these sales are being redirected into local social campaigns that the club is running via its foundation. In addition, the Timpers LUD trainers will form part of the official walking equipment of all teams of the Levante UD Foundation.