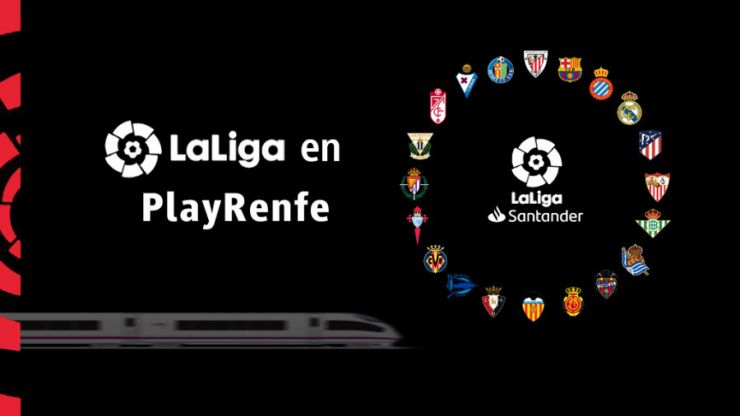 Renfe and LaLiga have signed a sponsorship agreement that will see the train company become the ‘Official Transport’ of LaLiga for the 2019/20 season and offer passengers live broadcasts of league matches, as well as European club competitions. With so many fans using the railways to follow their team around Spain, this initiative will help them keep up to date with the rest of each round’s matches during their journeys.

Additionally, Renfe is planning for the low-cost trains currently being designed, which will be operational from Easter of 2020, to feature this football programming.
For football fans planning a trip, the schedule for matches being broadcast can be accessed on renfe.com and on LaLiga’s website, while links for the purchase of train tickets are also found next to the fixture list for each matchday.

There will also be special offers for supporters using the train services. As part of this sponsorship agreement, Renfe will appear in communications materials sent out by clubs, while the train company will offer some special travel packages based on the requirements of travelling groups of supporters.

Beyond this, there will be advertising campaigns for Renfe’s services featuring the stars of the top football competitions, while the company will also be present on LaLiga’s digital channels of Facebook and Twitter, as well as on the LaLiga app. For LaLiga, to partner with a major national company like Renfe will serve to promote Spanish football further and bring the competition to an even wider audience.