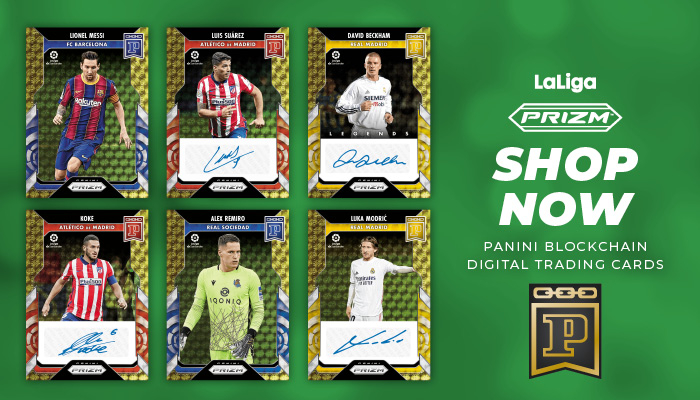 The market for sports trading cards has experienced a surge in the past year, with individual cards changing hands for as much as $5.2 million. For the first time, traders will now be able to add past and present LaLiga stars such as Cristiano Ronaldo and Lionel Messi to their collections, thanks to a new initiative by LaLiga partner Panini America.

Having grown through the trade of baseball and basketball cards, this marks the first time that Panini America has incorporated an entire football league into the blockchain environment.

Over seven weeks, 166 LaLiga cards will be made available to traders representing at least seven players from each LaLiga Santander club. Of these, 26 autographed cards are available from past and present stars of the competition, including Ronaldo, Xavi Hernandez, Mario Kempes and Joao Felix.

Each card is available as a 1/1, meaning it is the only one of its kind anywhere in the world.

In the first week of trading, Lionel Messi, Luis Suarez and Karim Benzema cards were available along with past legends such as Kempes and Javier Mascherano. Collectors purchasing the blockchain digital cards also receive a physical version as part of their purchase, which is printed using the popular gold vinyl that is used for many of the world’s most popular trading cards.

Collectors can follow the card auctions via the Panini Blockchain site or the Panini Direct app, with new auctions appearing on Monday mornings at 5pm CET. Those interested in making a purchase can sign up for a Panini America account using the website or app. All cards are being sold in a Dutch auction format, meaning that the asking price drops incrementally over time until the card is sold.

Once purchased, owners can store their digital cards in Panini blockchain and can also start trading cards with other users using the same platform.

In the near future, the Panini Blockchain site will offer additional functionality for its users such as personal galleries to display collections, ownership histories for individual cards and much more.