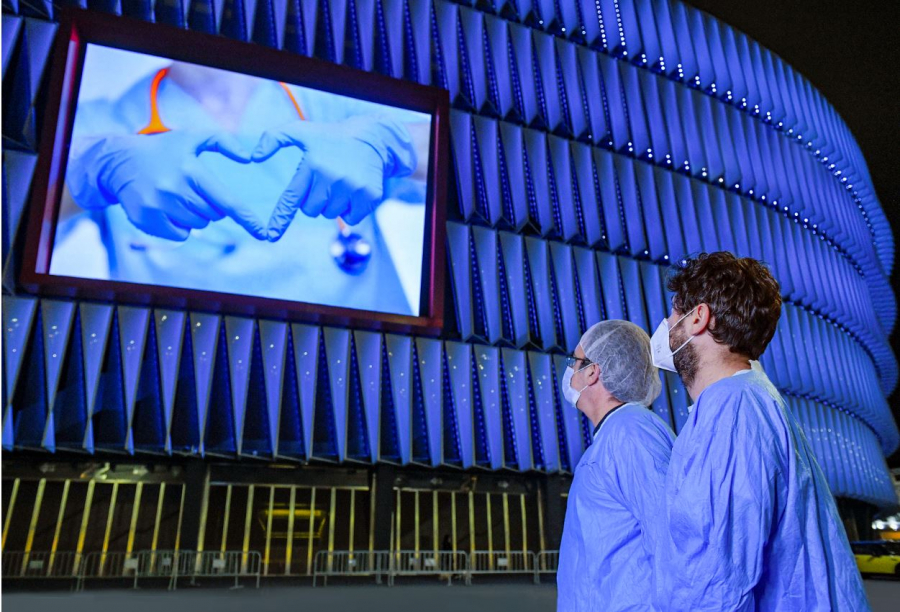 LaLiga Santander stadiums have undergone a spectacular transformation in recent years. From the new San Mamés in Bilbao to the nearby Reale Arena, from the Wanda Metropolitano in Madrid to RCDE Stadium in Barcelona, or Estadio de la Ceramica in Villarreal, Spanish football can boast some of the most modern and impressive structures in the world.

Whether new builds or improvements made to existing structures, these stadiums are designed to give fans a better experience – using technology to make any visit to more intuitive and memorable.
With fans unable to attend matches due to the ongoing health pandemic, these stadiums have taken on a new role in society.

Across Spain, they are being used as public symbols of resistance during the COVID-19 outbreak. Using the latest lighting and technology, clubs are sharing a series of messages to support, animate and thank everyone who is tackling the current health crisis and helping to steer the country towards the new normal.

The Wanda Metropolitano joins the applause for health workers
Atlético de Madrid’s Wanda Metropolitano stadium is a global reference in terms of technology and lighting. The indoor stadium roof features dynamic lighting in over 16 million colours, which allows extraordinary light shows to be created before matches.

During this state of alarm, the club’s home has been made available to the local authorities and the usual light shows are not taking place. Instead, the technology has been used to create a memorable sight for the locals of the San Blas district.

"Every day at 8pm, the stadium joins with the local citizens to send a huge applause to the health and security forces that work every day against the pandemic," said Fernando Fariza, director of operations at Atlético de Madrid. "A video is shown on the large screen of the main façade with our players applauding, while the stadium roof lights up in red."

Inside the stadium, technology is also being used to new effect. According to Fariza, "the central kitchen of the stadium, which has an area of 900 square meters and has state-of-the-art equipment, is being used for the production of daily menus for various groups without resources."

The team known as the ‘mattress makers’ is using every resource at its disposal to be close to its fans during this time and has set a primary objective of being close to the most sensitive groups.

"They should know that that their club cares about them as it does in any family," Fariza said.
In addition to activities at the stadium, "phone call campaigns have been started for the 1,200 members over the age of 75, our 150 disabled members and our fan clubs," the director noted. "We also have multitude of entertainment activities for all our fans via social networks.”

San Mamés displays messages of support
Athletic Club is supporting health personnel as well as residents of Bilbao by sharing messages of thanks and health recommendations through the giant screen of its San Mamés stadium.

Located in a central part of the city, the structure has been used to project messages towards health workers, including "You leave your soul for us, eskerrik asko bihotzez ('thank you very much from the heart', in the Basque language).

Thanks to the sophisticated lighting system that powers the exterior of San Mamés, messages are dynamic and constantly changing. The words "Eskerrik asko," meaning ‘thank you’, for example, have rotated around the outside of the stadium accompanied by heart images, expressing gratitude to all those who are supporting the fight against COVID-19.

"The most innovative aspects of the stadium have become relevant as this gives us the perfect platform to thank our health workers,” the club commented. “Using exterior lighting, the entire facade of the stadium acts as an immense screen that allows video, text messages and images to be projected."

The location of San Mamés, which can be seen from many of the hillsides surrounding Bilbao, has meant that the stadium is a beacon that reaches to many corners of the city.

To extend this reach, the club has also shared its stadium messages via social networks. “We are followed by media from half of the world,” the club stated. “In a few hours, our video has over a quarter of a million views through social networks.”

Like Atlético de Madrid, Athletic Club is also using the rest of its stadium space to good effect.

“Athletic Club has a role in the daily life of many people and of course, our members are a priority,” the club commented. “Therefore, in this quarantine we are focused on various aspects. The space in front of San Mamés, for example, has served as a parking lot for all the health workers that are working at the Hospital de Basurto, which is next to the stadium.”

The RCDE Stadium lights up blue and white
The RCDE Espanyol stadium, home of RCD Espanyol de Barcelona, is another modern venue that, due to its capabilities, has been able to pay tribute to health services in unique ways.

Every night the stadium is illuminated white to thank the health workers who are fighting on the front lines against the virus. The club also joined the international #Lightiblue campaign, joining other iconic buildings worldwide such as the London Eye or the Staples Center to turn blue in honour of health services.

The inside of the stadium, meanwhile, has also been offered to Barcelona’s medical teams for the storing of essential supplies.