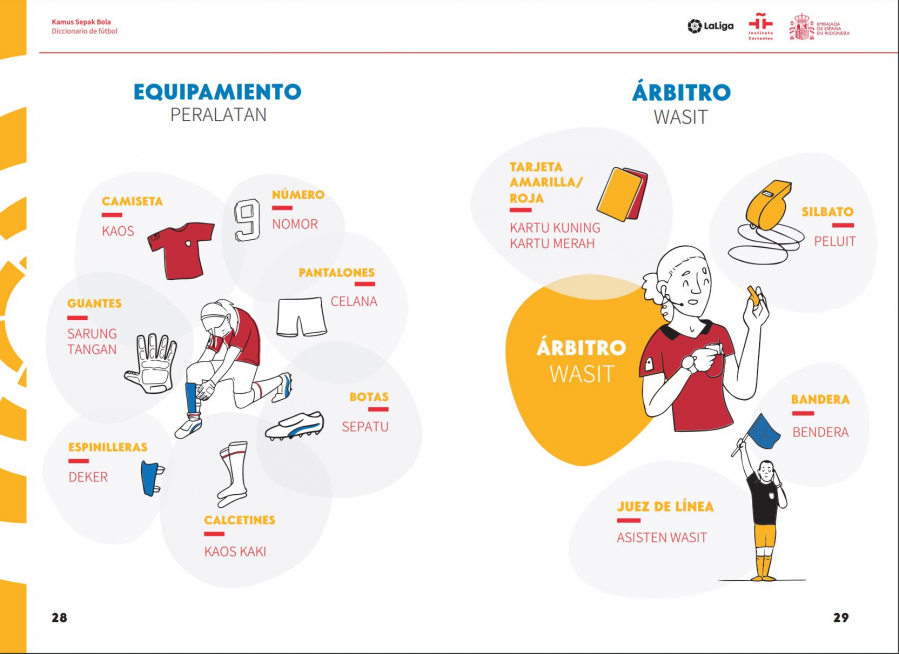 How LaLiga is spreading Spanish culture in Indonesia through language

As a Global Ambassador and one of the faces of the Spanish culture all over the world, LaLiga has partnered with Aula Cervantes Jakarta (the Official Spanish Language and Cultural Institute) and the Embassy of Spain to Indonesia in order to promote the Spanish culture in Indonesia through language.

In launching the Spanish football dictionary, the league is offering a basic football vocabulary in Spanish and Bahasa Indonesia that will be of interest for students of Spanish language as well as for Spanish football fans.

“The Diccionario is a testament to football’s role in Spanish and Indonesian culture,” said Iván Codina, Asia Managing Director, LaLiga. “This partnership recognizes the role of football and LaLiga in Spanish culture by extending it in a form of a football dictionary for Spanish language beginners. We hope to get closer to the Indonesian fans as it is one of the top priority markets for us,”.

As one of the most-followed competitions in a football-loving country, LaLiga’s reputation in Indonesia is already strong. The Diccionario will form part of its mission to advance Indonesian sports by utilising the shared passion for football of both countries. This mission is combined with Instituto Cervantes’s commitment to the development of the Spanish language in Asia.

“Spanish football, which is very popular among Indonesians, has great a potential to ignite interest in learning Spanish language at an early stage among Indonesians considering that these two can support each other,” added Javier Serrano Aviles, Coordinator of Aula Cervantes Jakarta.

“We are glad to collaborate with the Spanish Embassy in Indonesia and LaLiga to realise this football dictionary, with the purpose of facilitating the first introduction to Spanish language within the football environment by providing practical and useful materials for Indonesian fans and tourists who want to get closer to football.”

“We are glad that we have so many fans in Indonesia, and through this dictionary, we hope our bond will be stronger and our connection to be closer, so that more people embrace LaLiga not only as a football fans, but beyond,” added Rodrigo Abad Gallego, Indonesia Delegate, LaLiga.

Instituto Cervantes is a non-profit organization founded by the Government of Spain in 1991, with a mission to promote Spanish language teaching throughout the world as well as Spain's co-official languages, in addition to fostering knowledge of the cultures of Spanish-speaking countries.

The institute operates in 88 cities and 45 countries throughout the non-Spanish-speaking world.

Besides Spanish language courses, official Spanish language Exams (DELE), and teacher training, Aula Cervantes Jakarta organizes many cultural events in the capital in collaboration with the Spanish Embassy in Indonesia. These include film screenings, flamenco performances, exhibitions and puppet shows, such as the recent Wayang Golek Den Kisot by Komunitas Salihara and bapak-bapak Goenawan Mohamad and Endo Suanda.

The Embassy of Spain to Indonesia also welcomed the partnership with Laliga and Aula Cervantes Jakarta as another milestone in the bilateral relations between both countries that will contribute to increase the mutual knowledge, in this case through shared interest in football.

“We are very pleased to see that Indonesia and Spain are strengthening their relations through this creative project that will hopefully bring our two civil societies closer,” said María Prada González, Deputy Head of Mission of Spanish Embassy to Indonesia.

Electronic copies (pdf format) of the dictionary are available via the following link.